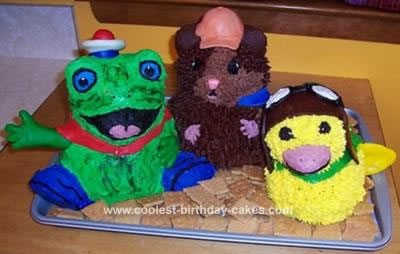 I got the idea for this cake on Coolest-Birthday-Cakes.com from a lady who used her 3-D rubber ducky pan to make Ming-Ming the duck (from the Wonderpets Cartoon). On Wilton’s website I saw how they made a frog from the 3-D teddy bear pan. I thought the frog looked similar to Tuck the turtle. So I thought it would be neat to make all of the Wonderpets in 3-D as a cake for my daughter’s 3rd birthday.

I baked a 3-D duck from yellow cake and two 3-D bears from chocolate cake and froze them. I made Tuck and Linny’s hats (the white sailor hat and the orange ball cap) from marshmallow fondant and let them dry for a few days.

Then I frosted the duck with a star tip and yellow butter cream icing. I used chocolate marshmallow fondant for the hat. I piped the goggles on top of the hat using more icing. I rolled out a green cape out of fondant. I made the shape of the cakes from some cardboard I used as a stencil. I made the duck’s wing from yellow fondant and attached it with two toothpicks (originally I tried to use a frosted rice krispie treat for the wing, but it was too heavy and it ripped the cake).

I frosted one teddy bear with chocolate icing and using a round tip I pulled the icing from each dot to make “fur”. I sculpted a nose for the guinea pig using a pink Starburst candy. Then placed the fondant cape and hat on. I piped pink frosting hands over the chocolate fur icing.

For the turtle I frosted another teddy bear green. The turtle’s “eyes” are on the bear’s “ears”. I sculpted a green hand and arm out of fondant and secured it with a bamboo skewer. I made another hand from fondant and placed it along with the fondant hat and cape. I used a toothpick with green gel food color to make dark green lines on his face and chest and then spread them with a knife until wider and smooth.

The characters are sitting on a cookie sheet with broken pieces of graham crackers to look like “woodchips” from Linny’s cage. When my daughter saw this homemade Wonderpets cake her jaw dropped and she said it was the best cake ever. Everybody liked it and said it tasted good too. It fed over 30 people. I hope this helps you make a fabulous homemade Wonderpets cake!