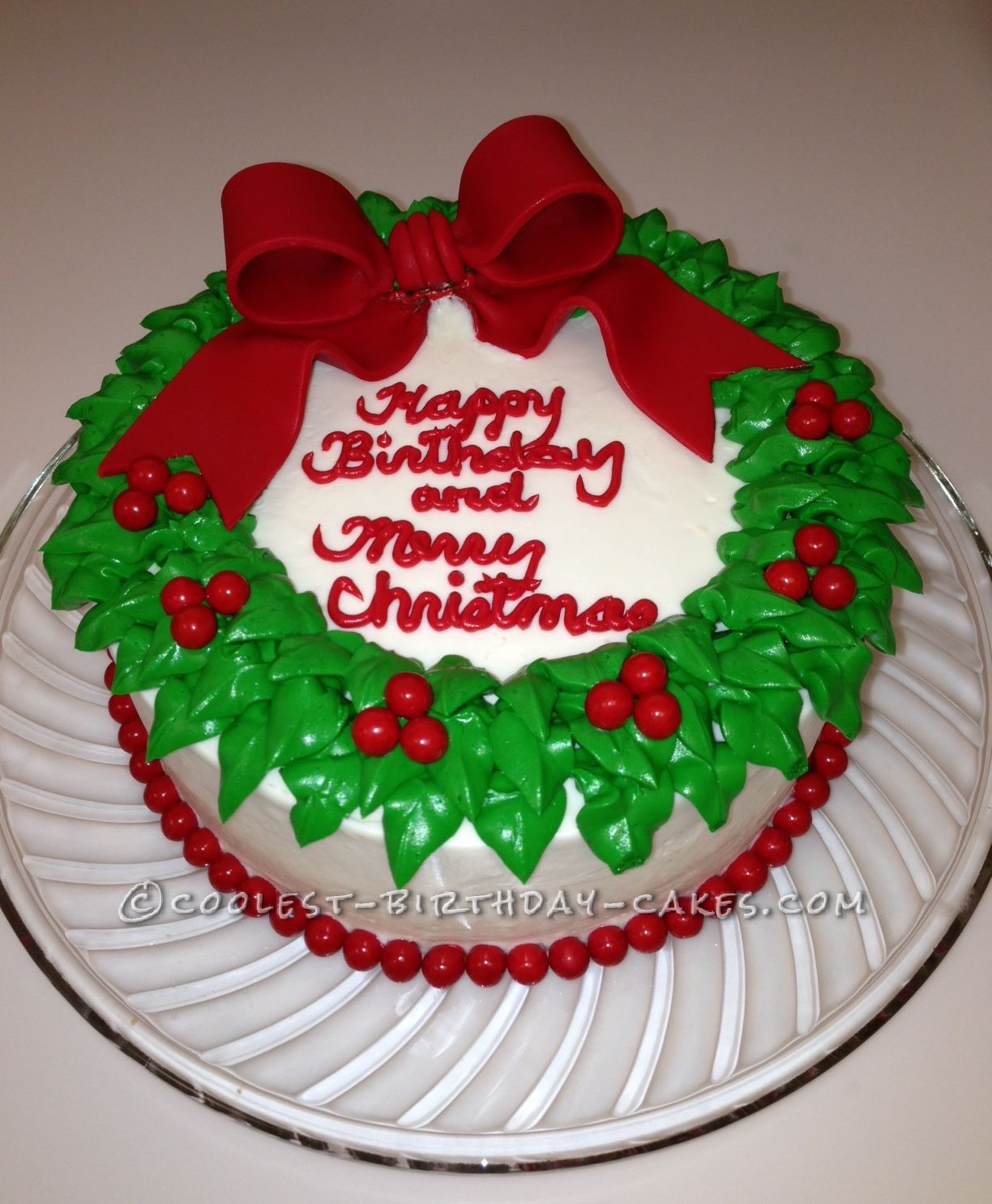 It was my husband’s aunt’s birthday and Christmas party on the same day so I made this wreath cake to serve 12 adults. It was a little warm that day (which is not unusual being in Hawaii) so I know my butter cream frosting will hold up to the humid weather. I found a Swiss meringue butter cream frosting on the Internet last summer and this is my “go to” recipe ever since. The frosting will get soft but does not melt.

I used one red velvet cake mix to make two 8” cake layers in two 8″x2″ round cake pans. The berries and bottom border are candy coated covered chocolate. I only bought red at the time and didn’t have time to hunt for green ones. I think the red and green border would have made the cake look more Christmasy.

The bow is made of 50/50 fondant/gum paste. I learned how to make the bow through the internet and this was my first one I made. The bow takes a few days to dry so I made the bow a week before the cake was due and stored it in an airtight container until I needed it.

I used pan grease (recipe found on internet) instead of cooking spray. The pan grease is thoroughly coated in the pans using a pastry brush to prevent the cake from sticking. While the batter is being mixed, I soak baking strips in water. After the pans have been equally filled with the batter, I tap the pan on the counter to release air bubbles to eliminate holes in the cake. The baking strips are then removed from the water and with my index finger and thumb I run them down the strip from top to bottom to get the excess water out just so it’s not dripping wet.

The baking strips are wrapped around the pan and placed in the oven to bake at 325 degrees. Baking strips and the lower temperature prevent the cake from forming a “dome” which means less waste and more cake. Baking at a lower temperature takes a little longer but when my cakes are done, they have no dome and therefore I don’t have to level them. I use a toothpick in the center of the cake to test for doneness.

When the cake is done, I placed it on a cooling rack until the cake pulls away from the sides of the pan and it is then turned out on plastic wrap, then wrapped again with aluminum foil and placed in the freezer until frozen or overnight. The cake stays moist when they are wrapped while warm and placed in the freezer. The cake is much easier to frost while frozen and when doing a crumb coat there is less crumbs to deal with because the cake won’t fall apart.

I placed one layer of frozen cake on a cardboard cut to size wrapped in parchment paper so the cake does not touch the cardboard and spread the cream cheese/butter cream frosting mixture as the filling. The second cake layer was placed on top and the entire cake was crumb coated with the vanilla/cream cheese flavored frosting. The cake was then placed in the refrigerator to chill for a few hours until it sets.

Frosting and Decorating the Cake:

I placed three candies to look like berries on the wreath wherever I wanted and also placed them around the bottom of the cake for the border.

The bow was made ahead of time and stored in an airtight container when I was ready to use it.  Just to be on the safe side, I placed the bow on the cake an hour before the party to prevent it from melting. Gum paste reacts to moisture and it would melt into the cake if it were placed 24 hours in advance.