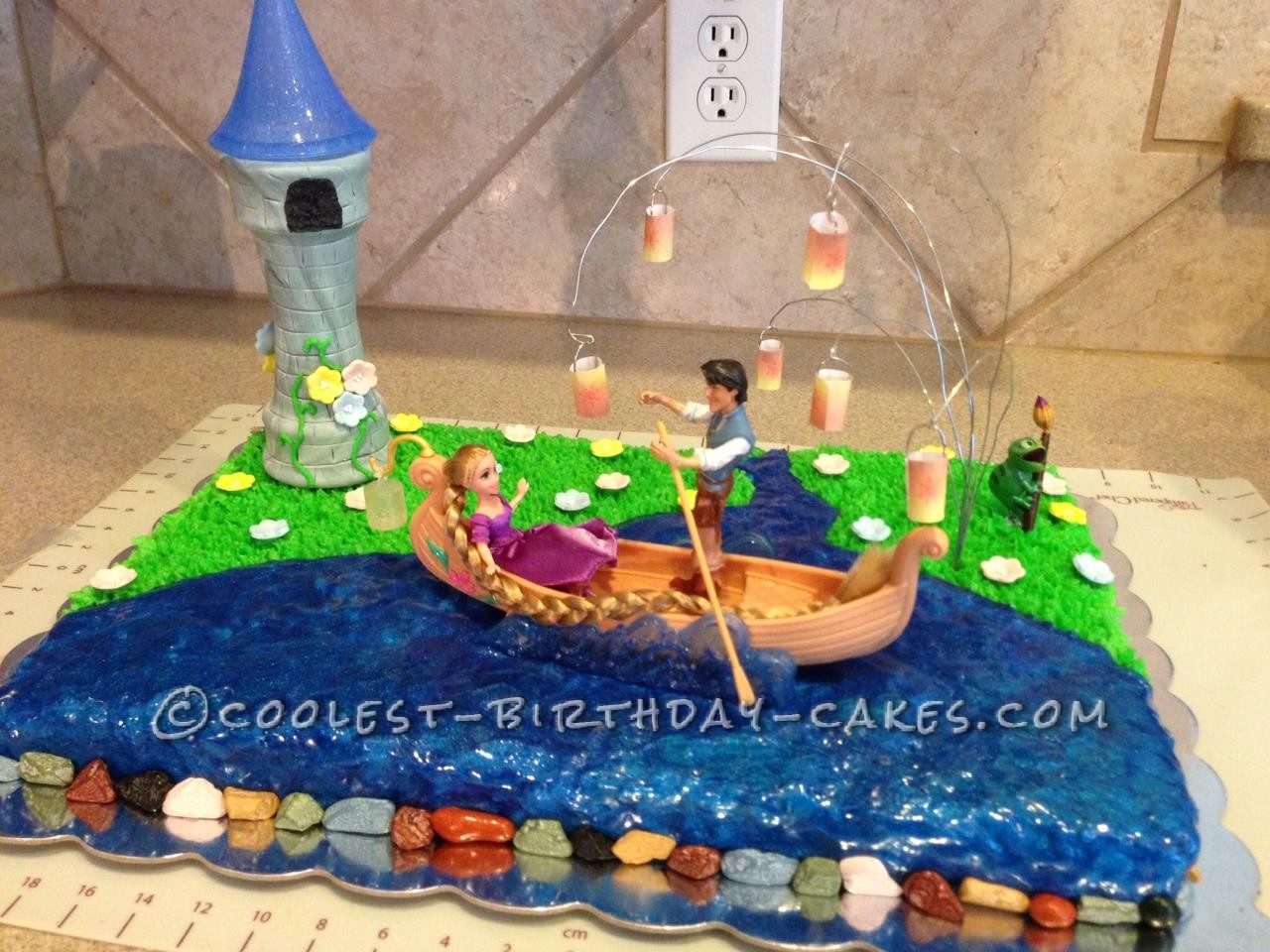 Nine months BEFORE her birthday, my daughter was set on wanting a Rapunzel cake. I kept telling her to wait until closer to her birthday to decide but she kept insisting she wanted a Rapunzel cake. She never wavered. So I decided  to make one for her. I am certainly not a professional but here’s how I made it if you want to use any or all of the elements.

My daughter’s favorite color is PINK…PINK PINK PINK! So she wanted strawberry flavored pink cake. I made one chocolate cake and one strawberry cake each in a 9×13 inch pan so the cake had two flavors – one on each half. Don’t forget to wipe the pan with vegetable shortening and dust with flour before you bake your cakes. This helps the cakes come out of the pan. Once the cakes are out of the pans, cut the top of the cake off with a serrated knife so they are flat. Then, I put them in the freezer. I find them easier to cut and frost when frozen. I also like to do as much ahead of time as possible so there isn’t as much to do around party time. 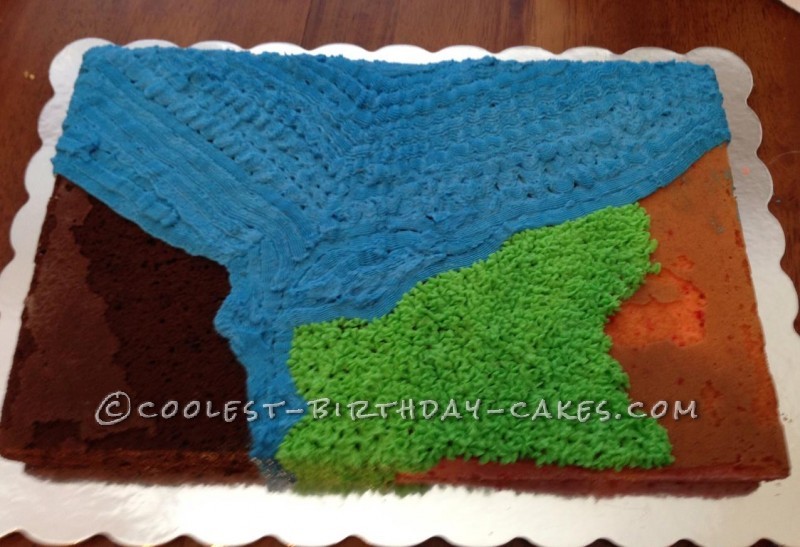 One fun way to make your cake more special and add in some of the Rapunzel colors, is by making flowers to put on it! Another thing you can do ahead of time!! Mine are made of gum paste. You can either make some yourself or buy some already made. I colored small amounts purple, pink & yellow (do one color at a time because they will harden quickly). I used Wilton gel dye: Violet, Rose Petal & Golden Yellow. You don’t have to use very much of the dye. Then use a rolling pin to roll out the gum paste. If it is too sticky or dry, you can use a little bit of vegetable shortening to make it more workable. Use a small flower cutter to make as many flowers as you want. While you are working with the flowers, you can put the extra colored gum paste in a baggie so it doesn’t dry out as quickly. I made extra flowers so I could use the ones I thought turned out best. I used the extras on some mini cupcakes I sent with her to school on her birthday! 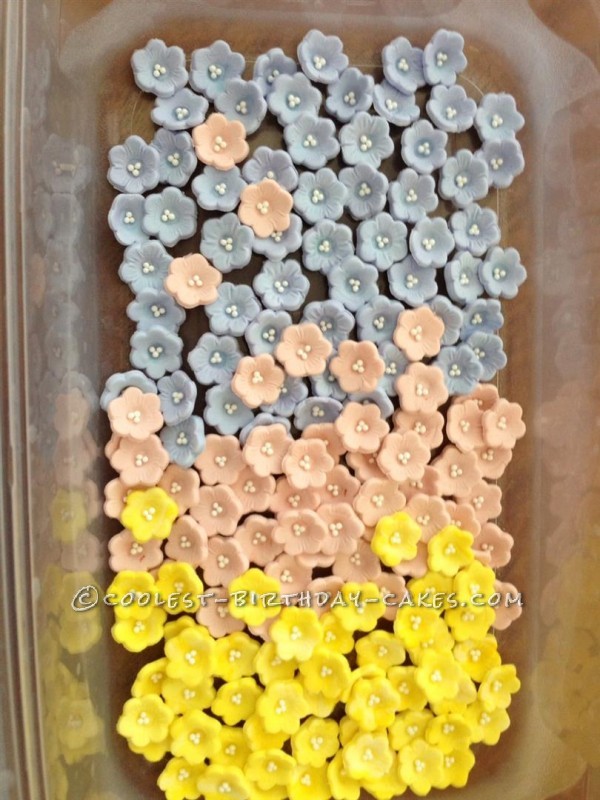 Then I used a clean rounded pencil eraser and pushed the flower gum paste lightly down on some foam to make them a nice flower shape. You can push as little or as much as you want depending on how “cupped” you want them to be. I think you could also use a clean folded up blanket for this part instead of foam as long as it isn’t going to get fuzz on your flowers. Remember to do this part quickly because the gum paste will harden fast! If you want to add a center, after your flowers are dry, you can use a small clean paint brush with a little water to brush the center of your flowers and put some sprinkles on. I used the white Wilton sprinkles for this (see below). I used a little bit of the green frosting to put the flowers on the cake. Do not put gum paste on the frosting until the day of the party because it will cause the gum paste to soften and change colors. And VIOLA! beautiful girly flowers for your beautiful girly cake! 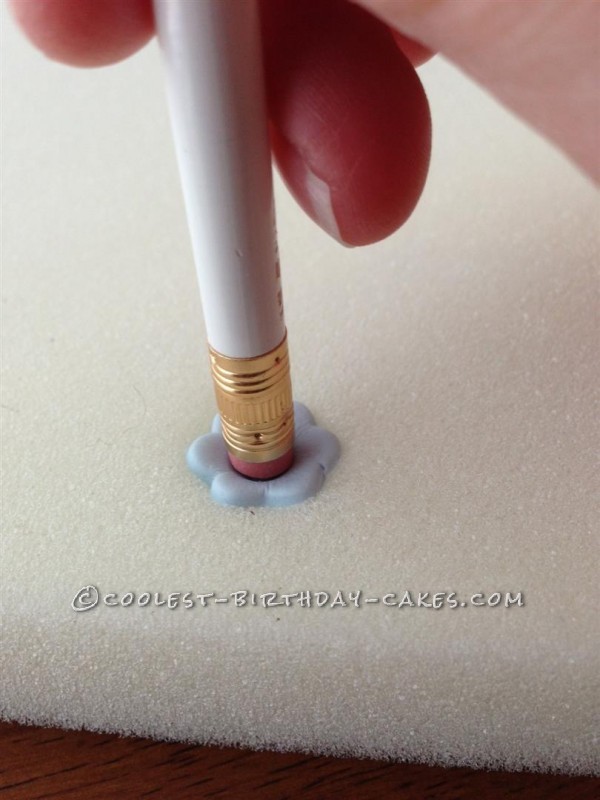 I cut the end off of each cake so they would fit together on the cake board I had. Turn the cakes so that the bottoms are on top and let the frosting begin! I used the Wilton butter cream recipe . I started with the water.  I used Wilton Cornflower gel dye to make the blue and put it on with the Wilton 48 tip (the middle tip in the photo above). This does not have to look perfect since you will cover it with the Wilton Sparkle Gel. I just used the butter cream under the gel mostly so it would taste better. 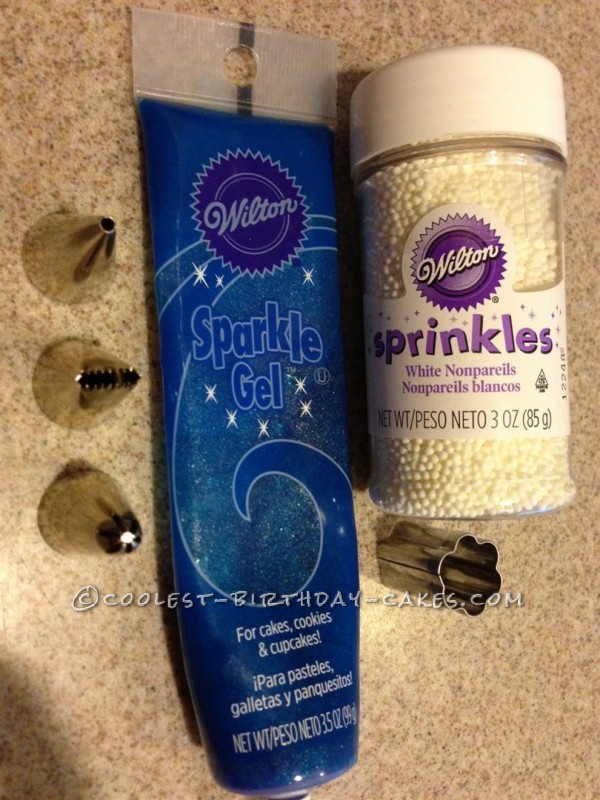 For Rapunzel’s green grass that she loves to frolic in, I used the Wilton Green Leaf color and tip 129 (on bottom in the photo above – there is probably a better tip for this but that’s the best one I had).

If you are going to make a Rapunzel cake, she HAS to have a tower, right?!?!! My tower is made from two ice cream cones! Connect the bottoms with some frosting or some corn syrup. They don’t have to stick super well because the gum paste on the outside will hold them together once it is on. That’s right….the outside is made from more gum paste! I used a little bit of black gel dye to make it gray. I didn’t mix it all the way in because I thought the “marbleized” look sort of made it look cool and old. Roll it out large enough to cover the cones and then just lay them down on top and push the gum past around to fit the cones.

This was a lot easier than I thought it would be and it turned out looking awesome! Mine had a seam in the back but I covered it with a frosting vine later. Just push the top and bottom edges down inside the cones. Then I used the back of a butter knife to make the brick markings on the gum paste. You have to work VERY quickly because it will harden fast! 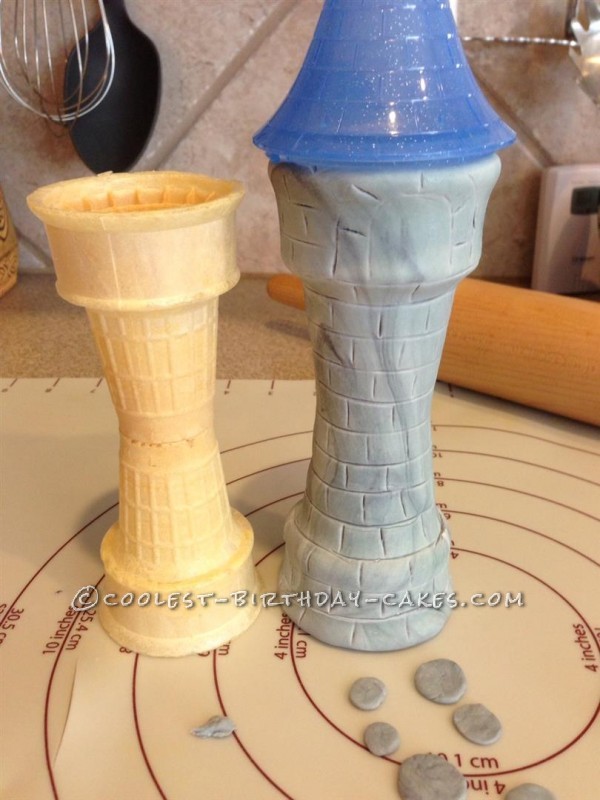 Remember, with gum paste, don’t put any frosting on it until the day of the party! It will cause the gum paste to soften and change color!!! For the window of the tower, I used black butter cream.  I used Wilton tip 3 (top tip in photo above) to put the green vines on the tower. I started in the back with the gum paste seam. Then put some smaller vines on front and growing off the big vine in the back. You can use edible glue to put the flowers on OR you can “cheat” like I did. I used super fast drying super glue and glued the edge of three flowers to one thumb tack. Then I put some super glue on the pin part of the tack and pushed it into the tower.

I did two thumb tacks with three flowers on each – one on the front and one on the back. For the top of the tower, I used a tower top from a castle toy my daughter has. You can make a tower top out of an ice cream sugar cone or shaped rice crispy treats. I was planning to use rice crispy treats covered in gum paste before I thought of using her toy tower top. I used three wooden skewers pushed through the tower and cut to size and pushed them down into the cake to help stabilize the tower.

What is a Rapunzel cake without Rapunzel? I used a toy I found called Disney Tangled Rapunzel’s Boat Ride. You can use any Rapunzel figure and if it isn’t in a boat, just put Rapunzel on the grass.

Floating lanterns are essential for the boat ride with Flynn Rider! For these lights, I used wire I got in the jewelry section of a craft store. I made the lanterns based on a photo of the lanterns from the movie that I found online. I printed them off my computer.

The rocks around the bottom of the cake are chocolate. I think Walmart sells chocolate rocks in their candy section. These are always a big hit with the kids! Don’t forget to have extras because all the kids (and adults) will want to try some! 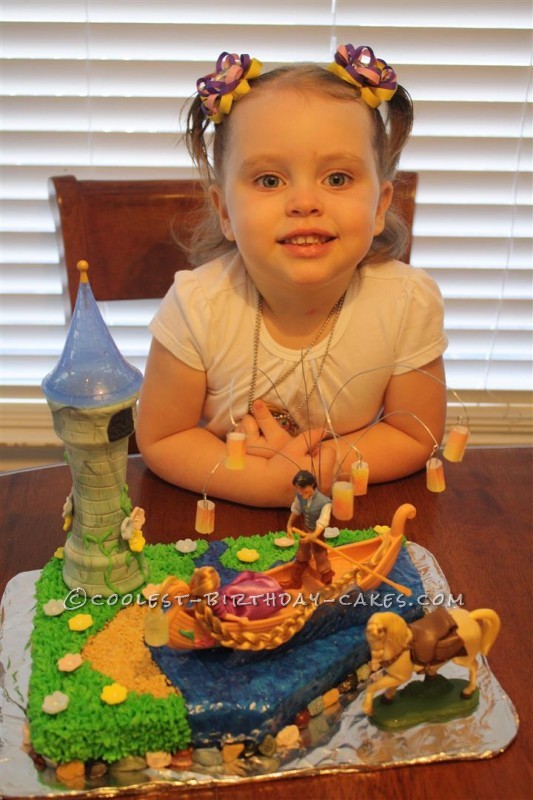 Here is a photo of my daughter with a different Rapunzel cake I made a week later for her family party (the other one was for her “friends” party). I am showing you this because it has another option for your cake: a beach. I made this small one out of crushed graham crackers. You can make it as small or as large as you’d like. Be sure to put some yummy frosting underneath to help it stick and to make it taste better! I also thought a drink umbrella would be fun if you had a little bigger beach! 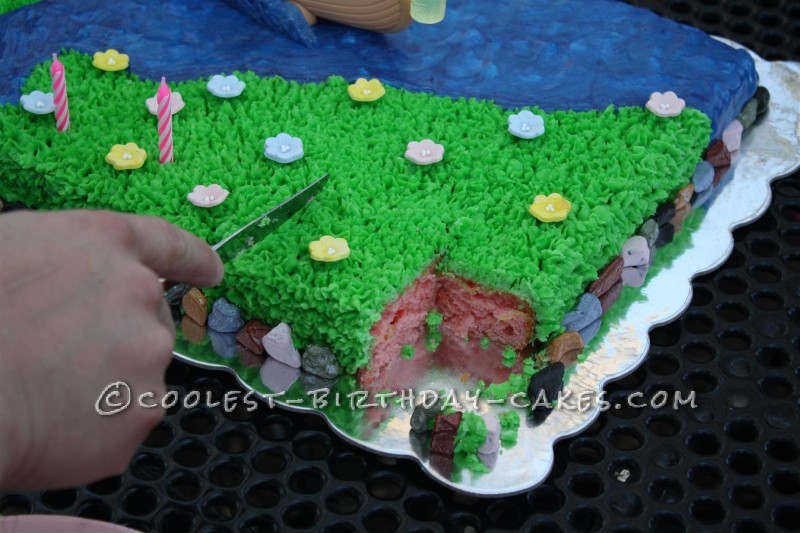 Here you can see the PINK cake! PINK PINK PINK! This cake really was not hard to make. If I can do it, so can you!! My daughter LOVED it and so will yours! So take a risk and try something new! You won’t regret it!