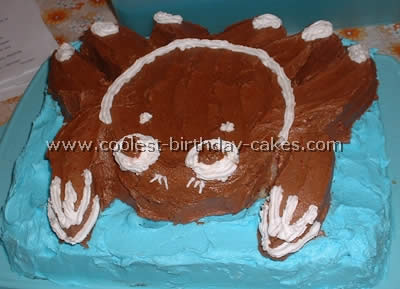 I baked a rectangle for the first layer and a round cake for the second layer of this crab cake. I cut a small circle out of the middle of the round cake and then used the rest for legs. I frosted the rectangle with blue frosting. Placed the small circle and legs on top and frosted them with brown frosting, not chocolate because my granddaughter doesn’t like chocolate.

She requested this cake because she likes to beachcomb at her other grandparents on Camano Island in Washington State.

This crab cake was actually pretty simple to make. My son Kevin had a “hermit crab” party where all the kids got to decorate their hermit crab’s shells, the cage and they actually took home a hermit crab! I wanted to make a little hermit crab cake to go along with the theme.

I took a soccer ball 3-d cake mold I bought at Michael’s and made that the “body”. I then made two 9×13 cakes (all cakes were made using Duncan Hines cake mix) to use for parts. I cut out small medium and large legs plus two front legs and two “pacman” circles for claws. I cut a half circle for each eye.

I colored white Betty Crocker icing with red food coloring and iced away. The whole cake took about three and a half total regular sized containers of the Betty Crocker icing. I piped the claws and the eyes with a star tip so that they would stand out a little bit and took a little black decorator frosting I got from the supermarket and put the little “eyeballs” on.

I cut out “Happy Birthday Kevin 7” out of green fondant to make it look like “seaweed”. The cake was a huge hit! Everyone was asking me where I bought it! The whole cake took about four hours total from baking to frosting and then the finished product.