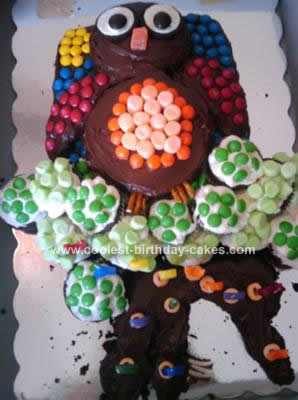 My son loves owls, and for his 6th birthday he requested a crazy cake. He wanted a “mystery” which is a question mark, his full name and the colors red and blue. While he was at school, I started browsing on this site, and decided to decorate his cake box with the above mentioned request, and to create an Owl Birthday Cake instead.

I used a small Pyrex flat bottomed bowl, and a medium Pyrex flat bottomed bowl, and an 9×13 rectangle. I also made 8 cupcakes and 6 mini cupcakes. I took the medium round shape (body) and cut the rounded portion off the top. Then I salvaged two wedges to make wings. I took the small round circle, and cut the rounded part from the top. This is the head.

I trimmed a portion off the edge of the rectangle to use as tree branches, making sure I left enough space to fit the owl. I figured a laying down owl would be easier to cut.

Then I put the larger circle right at the branches, and the head just above that. The wedges were put at the sides of the body to be wings.

I frosted the owl with chocolate frosting, and then began decorating. I used green m&ms and green marshmallows as the leave colors, put a yellow moon in the sky and colored the sky blue. I used Oreos opened, with the creme side up as eyes, with a junior mint as the pupil. I used frosting to attach this.

I took an orange slice gummy candy, and cut it in half, using the smaller portion as the beak. I put a circle of orange marshmallows as the belly with orange m&ms filling that in. I used red m&ms to decorate the wings.

He picked a Happy Birthday candle set he wanted used, so I put that along the branches, using some orange marshmallows to support them, since the branches were thinner cake slices.