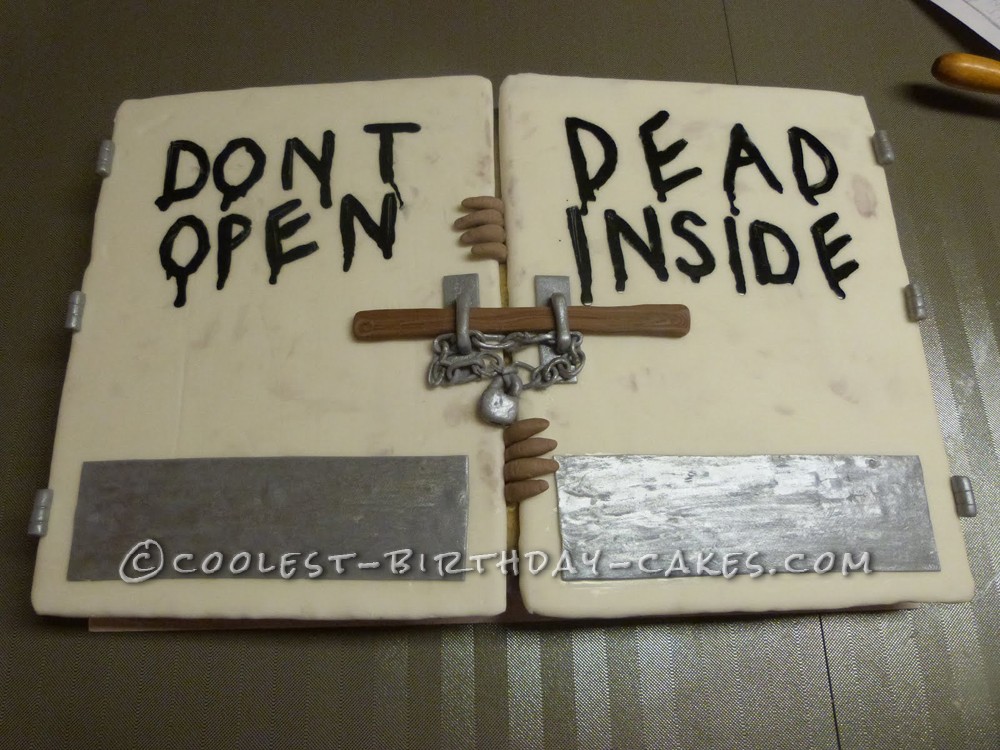 I made this creepy hospital doors cake from the Walking Dead for my friend’s husband.  She was throwing him a surprise 34th birthday party and the theme was The Walking Dead (from the TV show).  I got out my husband’s DVDs from the first season and watched and paused and watched and paused for the minute or so the hospital doors were being shown and drew out what I saw in order to plan what I wanted to do for my cake.

I baked a yellow cake in my 12″ x 18″ pan.  I frosted it with white butter cream and used color mist in black, orange, and yellow to spray down the middle and around the sides of the cake so it wasn’t so clean and white. I rolled out white fondant and covered 2 pieces of foam core I had cut to about half the size of the cake. I sprayed black color mist on my fingers and “dirtied” up the doors some. I colored some fondant gray and rolled it out. I cut 2 small rectangles for the plates behind the door handles and 2 large rectangles for the kick plates at the bottoms of the doors.

Using the remaining gray I formed a small log and cut 6 pieces to use for the hinges. I made short skinny logs, looped them, then attached the ends with water around each other to form my chain and made door handles and attached to the small rectangles with water. Then, I made a pad lock out of gray fondant. I used a small cap and combined about a teaspoon of water and a sprinkling of silver shimmer dust.  With a small paint brush, I applied the mixture to all the gray items (small and large rectangles, door handles, hinges, chain, and pad lock). I colored some fondant brown, but didn’t knead it all the way in so there were color gradations resembling wood grain. I formed the brown piece of fondant into a board and placed it through the door handles. I looped the chain around/through the door handles.

Using some of the leftover gray fondant, I added copper icing color and kneaded it in to make a sort of zombie skin color. I formed each finger individually by rolling like a snake and making one end smaller. Then I used my finger nails to form the nails and creases for the knuckles. The fingers were quite creepy!  I used water to attach the fingers to the doors close together to resemble hands and bent them around the edges. For the writing on the doors, I mixed black icing color with water and tipped the doors up so the color would run. I used a paint brush and painted on the words. I used a blower on low heat to help it run down the doors. Since the doors were made from fondant-covered foam core, they could be easily removed from the cake when it was time to serve.

My friend thought the cake was amazing and her husband was absolutely thrilled with it and his surprise party!  This is one of my favorite cakes and the most fondant I’ve ever used on a single cake. 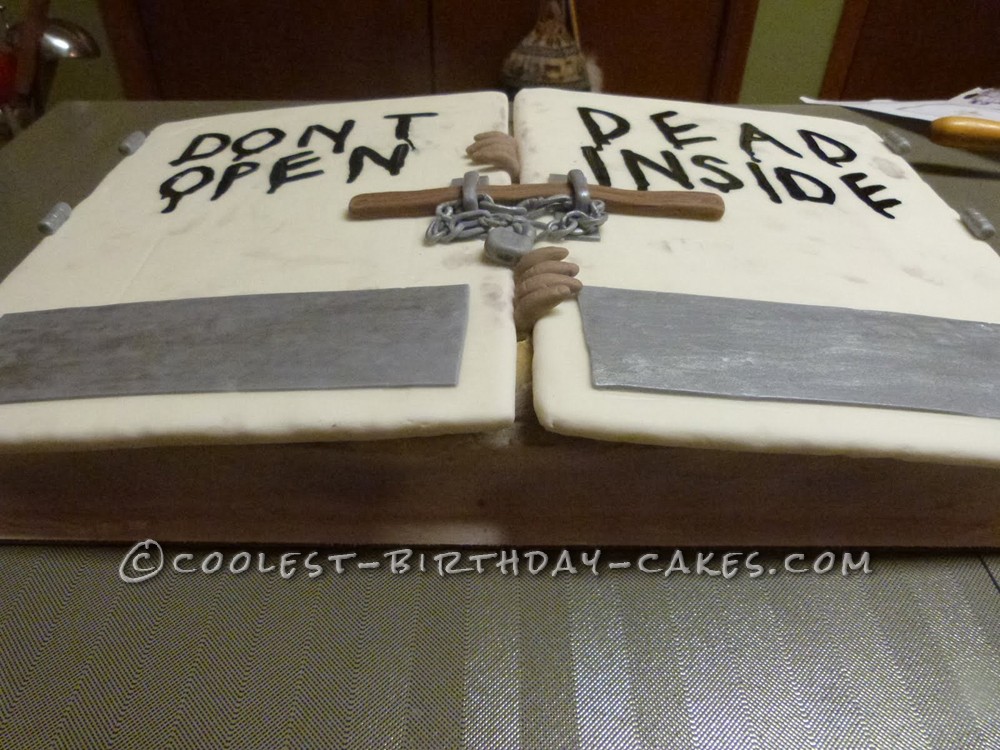