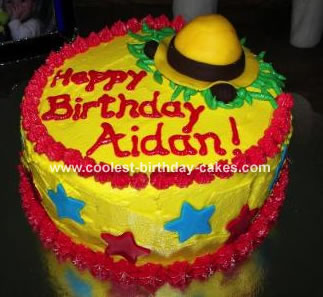 My son, Aidan chose a Curious George theme for his third birthday. I found all of the supplies at the party store, but was stumped on how to make a Curious George cake that didn’t make me cringe when I looked at it (I’m a perfectionist!).

I decided to take my inspiration from the classic Curious George colors of yellow (of course!), red, and blue and go from there. I found focusing on the hat so much easier than trying to replicate George.

My son chose chocolate, so I made a 3-layer, 9″ round, chocolate cake. When the cakes cooled, I sliced off the rounded tops, making each layer level on both sides. I stacked them and put chocolate icing between the layers.

I then made a large batch of white icing and colored most of it yellow, leaving some out for red and green. I iced a thin first layer, called a “crumb layer” in yellow icing to get any crumbs and let it “dry.” Then, I did my thicker, final layer of yellow icing all around the cake, using a spatula to make it as even as possible.

Using my Pampered Chef Easy Accent Decorator, I used the thin, tube-like tip to make grass in one corner of the cake. I then bordered the top and bottom edges of the cake in red icing using the small star tip.

For the fondant decorations, I bought Wilton’s premade white fondant and used concentrated gel colors to make the different shades. For the yellow hat, I shaped a solid ball of yellow fondant into a domed shape. I then rolled out some yellow fondant and cut around a glass to make the brim. I rolled out brown fondant and cut a strip to place around the hat. For George’s paws, I made 2 balls out of the brown, elongated one end to tuck under the hat, and scored the rounded ends with a butter knife to make them look like paws.

The stars were simply fondant colored red and blue, rolled out, and cut with a small cookie-cutter. Because the main icing was creamy, they stuck to the sides very easily.

The writing was done with Wilton’s red glitter writing gel. The cake recipe and white icing (I made 1 1/2 times the white icing for all of my decorating)recipe were from the Better Homes and Gardens Cookbook, and the chocolate icing recipe was from the back of the Nestle Cocoa Powder box. Enjoy!