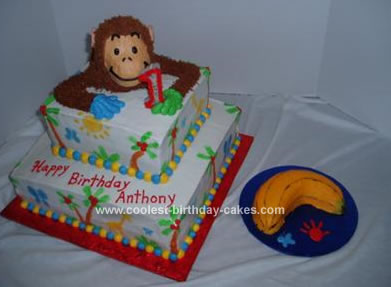 This Curious George cake has a huge story behind it. Initially I had positioned his head in the corner using the stacked method and a lollipop stick inserted down into the cake for added support. The cake was almost complete except for a last few details which I was going to finish in the morning. It was 9:00 at night and I was pooped for the day. As I sat watching t.v. I heard a soft plop behind me and when I turned to see what it was, I was horrified to find that the weight of George’s head was too much for the corner and it had literally pulled the whole corner out of the top tier and fallen on top of the table! I guess I was lucky it happened at night because it took me two hours to fix and if I had discovered it in the morning I would have dropped dead. It was a horrible sight! My customer was due to pick it up at 10a.m.

So to explain how I made this, I used two mini-doll cakes to form his head. Once I cut the top off of and used it for the face by gluing it onto the front of the other with buttercream and a lollipop stick inserted horizontally. The rest was used for the shoulders and then I shaved it here and there a bit to get the shape just right.

When I repaired the cake I repositioned him to the center of the cake instead, after “gluing” the corner of the cake back on. His body was created by piping large mounds of icing into the basic shape and then piping the hair on with the grass tip.

The photo doesn’t show but he is actually sitting in the corner on top of the bottom tier with his legs on either side.

The palm trees and other details were painted on using a paint brush dipped into very soft but not watery buttercream.

The banana smash cake was made out of the cake scraps that I mashed together and formed into the banana shape. The cake is based on a photo of him painting a room with his hands; hence the green and blue hands and painted on details. 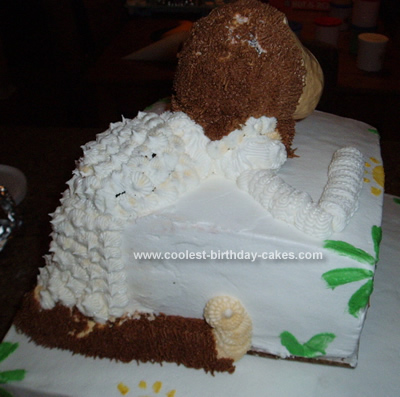 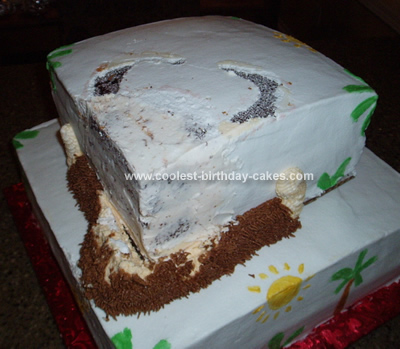 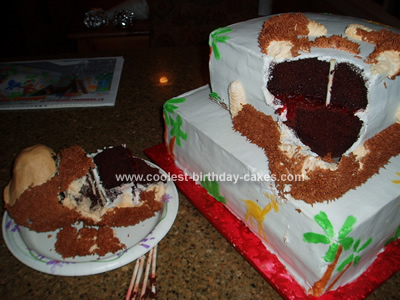