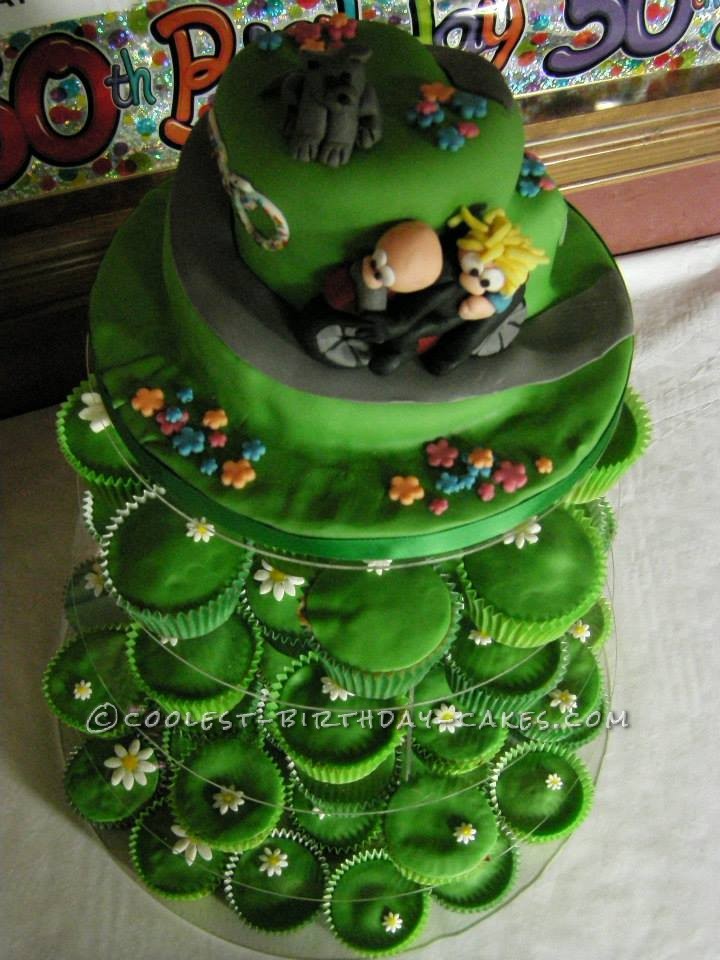 I wanted to make something with a sense of humor for Debbie’s 50th, but also something pretty, and since it was for a party centerpiece, something everyone could take home a part of and she could still have a ‘birthday cake’ at the end of the night.

I made 72 cupcakes, using two different colors of green cupcake cases, with Lincoln green sugar paste icing, and different sized daisies on top of each one (I have a set of three daisy cutters). I made the daisies out of  white flower paste, and painted the centers yellow.

The large cake was made from a 4″ and a 6″ round Madeira cake. I wanted to make a spiral cake, I’ve seen a few online, with different methods used for their construction.

I trimmed both cakes so that they were level. Halved them (to create a sandwich effect) and gave them a jam filling, and then stuck the 4″ on top of the 6″ centered, so that there was a 1″ difference between the two all round.

Next, I did the same thing on the edge, with my first stick at the top of the 4″ tier, my last at the bottom, 180 degrees from the first, and one halfway down, at 90 degrees, filling in the gaps.

This was to be the path of my spiral.

Because my bottom tier wasn’t going to get any wider, I just put cocktail sticks onto the side of the cake in the same pattern. I then carefully cut around the top tier of the cake following the guideline from the cocktail sticks, then around the edge, following that guide, so a chunk was removed from the top tier, with a path descending and slowly disappearing. By the time it reached the bottom tier it had completely disappeared.

On the bottom tier, I cut along the cocktail stick line, and carefully cut down where the top tier met the bottom tier. I was able to remove the chunk of cake from the bottom tier and flip it over, using it to make up the missing section of path to join the two tiers.

I made sure my transplanted bit of cake was stuck in place, with extra jam, and covered the entire cake in butter cream, so it looked like a long spiral road running from top to bottom, then rolled out about a pack and a half of green sugar paste, carefully easing it onto the odd shape so it didn’t tear or crease.

I then rolled out a long thin piece of grey sugar paste, and trimmed it into a 1″ wide length and placed it around the cake to be my spiral road.

I printed off several pictures of bikes with pillion passengers so that Derek and Debbie would look right on their bike, and I positioned them on the tallest part of the cake, so they would be supported by the hill behind them.

I also only had to make their left halves, since they were pressed right up against the cake.

I finished the whole thing off with a glittery number 50, and Debbie’s name on the two sides of the cake, and their cat Dexter waiting at the top for them to arrive, and set it up on the buffet table.

Debbie loved the cake. Derek complained that he does have some hair, and I hadn’t given him any (I would have thought his lack of ears would be more of a problem, but still).

I got a great reaction from the other party guests, and lots of people took home a cupcake. 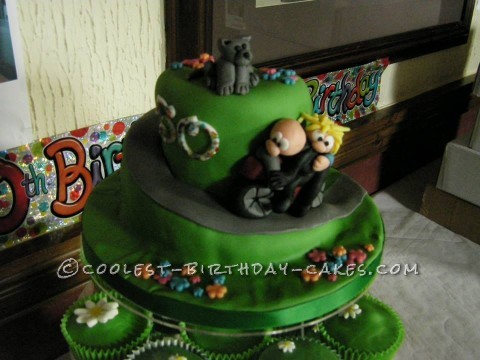