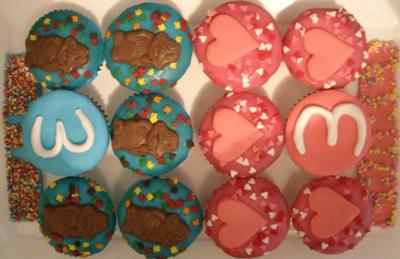 My friend asked me to make her twins some cupcakes for their 3rd birthday. I had previously made reindeer cupcakes for an earlier Christmas party (sorry I didn’t take a photo!).

One of the children is a boy and one is a girl so I wanted to come up with something which would make the cupcakes individual for each child.

I made the cupcakes using a basic cupcake recipe which I found on forums.vogue.com.au. I cut off the top bit of the cupcakes which had risen too high so they would all be even. I tasted one of the bits I had cut off and it was delicious.

For the girls side I used fondant icing and added red food colouring. From memory I may have used a can of coke to cut the circles. I used heart shaped cookie cutters to make the hearts and used sprinkles in the shapes of hearts around the rest of the cupcakes.

I also used fondant icing and sprinkles to write their names on each end of the cake platter.