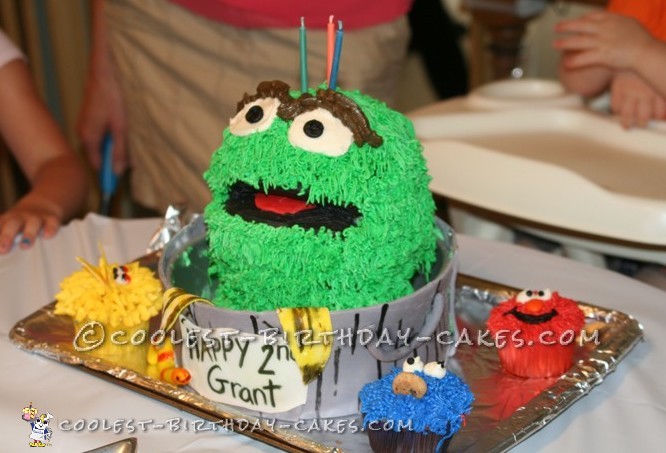 My mom always made our birthday cakes. In fact, she made all our baked goods.  I vowed that I would do the same for my kids.  So, every year they choose what they really love and I make a cake. My older son thinks it’s fun to challenge me.  Well, it was a little different for my younger son’s second birthday.  I LOVE Oscar the Grouch!  Since he was turning two and really didn’t have a say in his cake (shhh, that’s our secret!), I decided he would have an Oscar one.  He doesn’t watch much TV, so I had to buy him Sesame Street books and toys so he would at least be familiar with the characters at his birthday party.

To make the Oscar and friends birthday cake, I bought a small cake pan to use as Oscar’s garbage can and wrapped it in fondant and banana peels made from fondant. The black was painted on with Wilton icing color.  I made a raggety sign to adorn the trash can, wishing my son a happy 2nd.

Oscar himself was made using a ball cake mold. I cut out the mouth and used buttercream to create my green furry guy.  I had to perch him on an upside down container inside his cake pan garbage can so we could see his cute face.

Slimy the worm was created from fondant.  All the cupcake characters (Elmo, Big Bird and Cookie Monster) were created from buttercream.  Big Bird’s eyes and beak were fondant. Word to the wise: Do not store in the fridge overnight unless you want droopy beaks.  I had to redo them on party day. I used Wilton icing colors to paint his eyelids, Elmo’s nose is a red M and M, and Cookie Monster’s cookie is a mini Chips Ahoy (ahhhh, store bought!).

When it was time to sing Happy Birthday and bring out the cake and cupcakes my son was shooing everyone away, telling his cousins, “No touching!”  He didn’t want them eaten.  He told his grandmas who were trying to take pictures, “No, Geemas, my ‘Okars’ cake.”  So even without TV, the Sesame Street characters were a delicious hit! 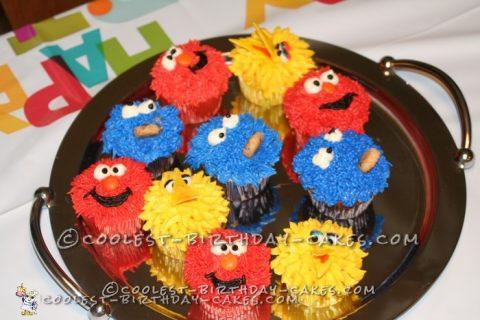 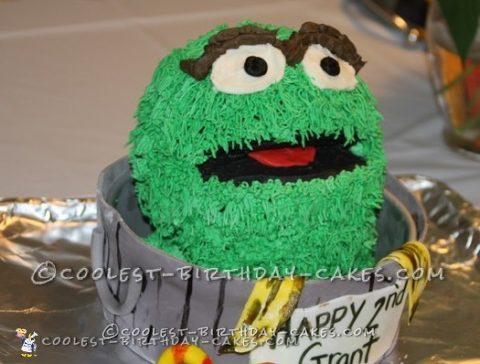