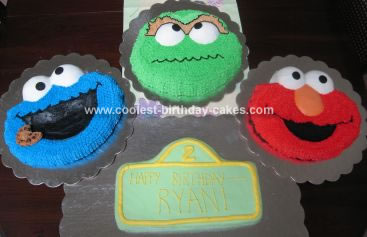 For my nephew’s 2nd birthday, I decided to make him a few cakes to go with his Sesame Street theme. I searched on this website and gathered some ideas for a Sesame Street Birthday Cake. Wilton currently sells an Elmo cake mold, but aside from EBay, it is hard to find Cookie Monster or Oscar cake molds. I decided to improvise.

The Sesame Street sign was made with a box of cake mix in a 9 x 13 pan. I made a paper pattern of the sign, placed it on the cake and cut around it. I covered the cake with fondant dyed Leaf Green. The recipe I used is simple and can be found on Google – “mm fondant”. I used yellow icing to outline the sign and write on the cake.

The character cakes were next. I started with Elmo. He is made using the Wilton cake mold and one box of cake mix. His eyes and nose are both covered in homemade fondant. The rest of Elmo is covered in #16 tip stars with store bought icing that I colored with Wilton Christmas Red gel.

Cookie Monster was next. I again used a box of cake mix in the Elmo mold. Cookie’s face is very similar to Elmo, he just has a larger mouth and no nose. I filled in the mouth first with black icing, making it larger than Elmo’s, and covering up the nose area. I covered the eyes with fondant and piped #16 stars colored with Wilton Royal Blue gel. I added a cookie to complete this cake.

Oscar was the hardest character to make using the Elmo mold. I sliced off the Elmo eyes and moved them lower on the cake. I used scraps of cake from the Sesame Street sign to fill in the spaces on the sides and where I removed the eyes. I was attempting to make an oval head, rather than the one with the eyes on top. I pieced it together using icing as glue. I drew Oscar’s mouth with black icing and covered the eyes with fondant. Oscar is covered in #16 stars using Wilton Leaf Green gel for color. I filled in the eyebrows last, dying the icing with Wilton Brown gel and outlined them with black icing.

I probably would not make Oscar again, since the Elmo mold really does not work for him. Making Cookie Monster with the Elmo mold, however, was very simple.