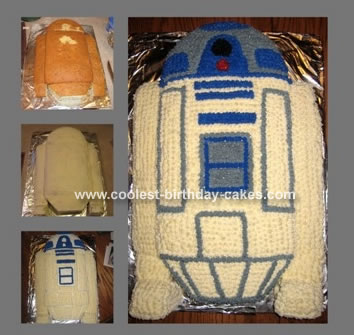 My son wanted a Star Wars party for his 5th birthday, and was requesting that I make an R2D2 cake. I Googled “R2D2 cake”, and the search led me to this site. With some great examples of previous cakes made, I was able to put my son’s cake together.

There’s only so much “originality” I can handle, so I used regular store-bought cake mixes. I used 4 mixes total: 3 9X13 cakes and 2 8-inch rounds. R2’s body is 2 of the 9X13 cakes stacked on top of one another. I cut one of the rounds in half and stacked the pieces, putting them at the top of the body to make his dome.

Then I did the same with the second cake round placing it on the bottom of R2’s body. Then I trimmed the bottom round pieces so they were angular, forming his bottom. The last 9X13 cake was used to make R2’s arms and feet. The arms were only a single cake layer high (when frosted, this gave definition to R2’s body shape).

I wish I could say how I made the feet work, but I’m still not sure myself. I experimented with some of the leftover cake pieces and toothpicks until it looked kind of right. Then I stuck the whole thing in the deep freeze for a few hours. I will never frost an un-frozen cake again!

Once the cake was frozen, I frosted a white base layer with store bought frosting. Partly so the cake wouldn’t peek through the star tipped design I was planning to do later (this has happened to me before), and partly to seal in the crumbs so the decorative frosting would be easier. Then I put the whole thing in the freezer overnight. Really, it was late and I had already worked on the thing for hours. I needed a break!

For the decorative frosting, I made a batch of homemade buttercreme frosting (a family recipe, but the buttercreme frosting recipe that Wilton gives on its cake pans and probably their website works well, too). I think my recipe makes about 6 cups of frosting. I don’t like store-bought frosting for piping on icing; I don’t think it’s stiff enough to hold the designs. I freehanded R2D2’s design into the frozen base layer with a toothpick to have a guideline of sorts, and mixed up my colors. Then I spent the next 2 to 3 hours piping on all those little stars….. The red and black circles on his dome are sprinkles I had leftover from Halloween and Christmas.

It was a lot of work, but well worth it. The cake was a hit with my son and at his party. And my husband still thinks I’m crazy for taking it on!