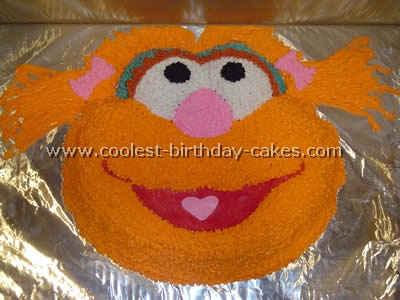 I made this cake for my daughter’s 2nd birthday. I used the Wilton Elmo cake pan. Looking at a Zoe Sesame Street picture, I outlined in all of the main parts and filled in with the star tip. This cake did take a while to make due to the many different colors that had to be mixed up.

My daughter’s name is Zoe, so I just couldn’t resist using Zoe from Sesame Street for her 2nd birthday party theme. I found very cute invitations, napkins, and tablecloths with a Sesame Street picture of Zoe dressed up like a ballerina; so that is what I made on the cake.

I started by making a cake in a 13×9 inch pan. I left the cake in the pan and made the Wilton buttercream-icing recipe. I frosted the whole cake top white. I had photocopied one of the Zoe ballerina’s from the tablecloth and it was just the right size to fit on top of the cake. I cut it out then used a toothpick to outline the shape on the frosting.

I used orange frosting for the fur and again used a circle tip, but pulled the frosting out to make it look like fur. I added the final details of the eyes, bracelet, bows and necklaces again with the round tip. Finally, I used the star tip to go around the edge of the Sesame Street picture cake with the dark pink frosting. My daughter loved it and thought Zoe looked like a princess!

I bought a large sponge slab cake from our local supermarket, found a Sesame Street picture on the net of my daughters favorite Sesame Street character which I found on the Sesame Street website., blew it up on the computer, used it as a template and then cut it out. I iced and decorated it using string licorice.