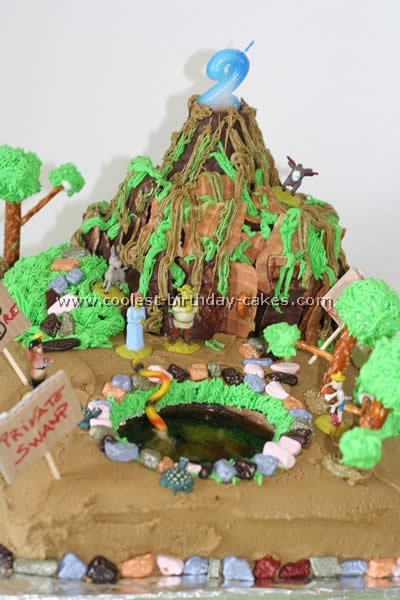 My nephew is crazy over Shrek so he had to have a Shrek cake. I made a 1/4 sheet cake and frosted it with brown butter cream frosting. The trees are made of large pretzels as the trunk; small pretzels for the limbs then I used marshmallows frosted with green butter cream frosting (make sure you don’t prepare them too early because they will get soggy and fall apart).

Then I used a chocolate covered waffle cone and a couple different colored waffle cones for the tree trunk house. To make the house look like it was stacked up high I used different layers of cake inside of the waffle cones to hold them in place. Then I colored three different colors of green butter cream frosting to make Shrek’s house look like it had moss growing from it. The rocks are the chocolate candy rocks you can buy in bulk at many grocery stores.

The water hole in the front of the house is a glass bowl filled with green food colored water. I cut out a hole in the center of the cake to fit the bowl into. I found the figurines online and strategically placed them around the scene. I had such a wonderful time and everyone loved it! 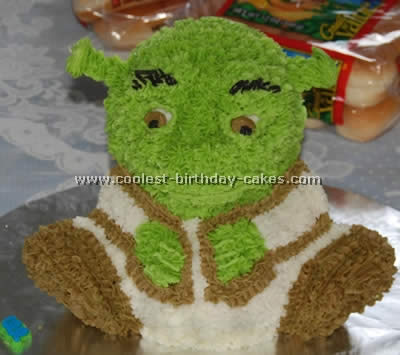 My friend made this Shrek cake for my daughter’s birthday party. She took a 3D bear mold and manipulated it to make Shrek. She used candles for the ears then covered them with icing. She used the normal cake type for this. I couldn’t believe how well it turned out. 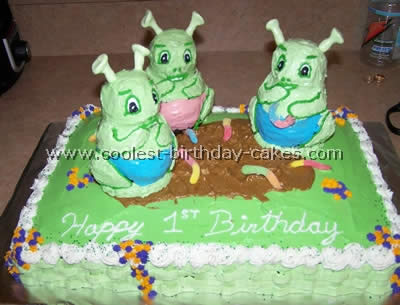 A friend of the family was having a first birthday party for her triplets! She was going with a Shrek theme; the invitations actually had the Shrek babies playing in mud. So I tried to duplicate the invitation on this Shrek cake. This cake also allowed each baby to have their own cake to tear into.

The Shrek babies are actually made with a small bear cake mold and I just sculpted the head to look more Shrek like. I used fondant to make the ears. 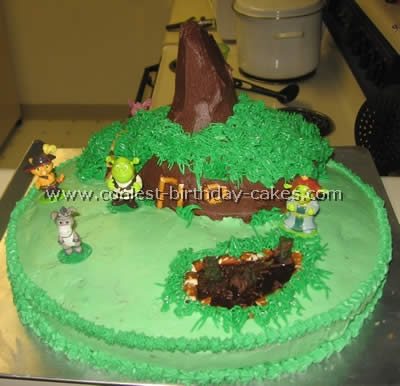 I was inspired by the picture of the Shrek trunk for this Shrek cake. I used a 14″ round pan for the bottom, one 8″ round and the middle of a bundt cake (for the tree) and a few cupcakes (just whatever batter you have left from two cake mixes). I cut the top of the tree at an angle for effect. I tried a new buttercream icing that I loved but only recommend if you’re looking for less sugar taste and you use unsalted butter.

In a large bowl whip 2 cups butter on high speed, occasionally scraping down the sides of the bowl. Whip until double in volume. This takes a very long time, approximately 10 minutes. While still whipping, drizzle 1 cup of heavy cream. Continue whipping until the mixture is stiff, approximately 2 to 4 minutes. Add 1 cup of confectioner’s sugar and whip until smooth. At this point you can taste the frosting and determine if you would like to add more sugar to sweeten to taste.

I stacked the 8″ round on the 14″ round with icing as glue. I took four cupcakes and stacked them on top of the 8″ round and then the middle of the bundt cake on top of that. I then iced the bottom round with green icing and the tree with chocolate icing. I used a grass tip to do the grass with a little brighter green. I used some melted chocolate icing for the swamp, pretzels for the window, door and rocks. I used three green gummy bears for the triplets and the Shrek figures are from a matching game. 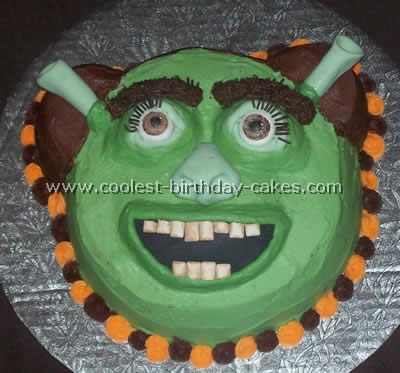 I made this Shrek cake for a six year old little boy. I used the Wiltons “animal cracker” pan for the shape of Shrek’s head. I made the eyes, nose, ears and backdrop of mouth all out of fondant. To make eyeballs I used jawbreakers and than molded the fondant around them. For the teeth I used juicy fruit gum pieces. I soaked them in brown food coloring watered down with vanilla flavoring.

The eyebrows are really gummy worms covered in chocolate buttercream then chocolate sprinkles to look like hair. The rest of the cake was iced in colored buttercream. 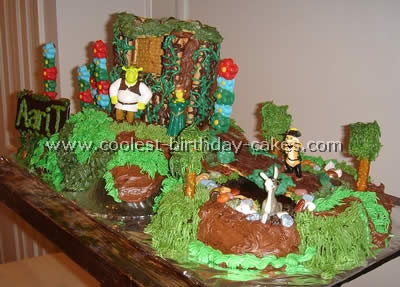 I used three Wilton cake molds (a flower-power pan, castle pan and a baby carriage pan) to create a rough curvy landscape for this Shrek cake. In truth you could use any two to three pans as long as they have lots of curves/angles in the borders. I put the flower and baby carriage molds next to one another and then plopped the castle one on top. Once I was done icing you would never know what molds I used.

For the chocolate mud pond I scooped out some of the cake and poured chocolate ganache in the middle of it. The bridge is made of pretzel sticks with fudge across them. Shrek’s house is made of graham crackers with the cereal straw sticks molded on the front with icing to create a log cabin look. The roof is also made of graham crackers and the “rocks” you see on top of the roof and around the pond are chocolate rocks. You can find them at Mr. Bulky’s or order them on line. 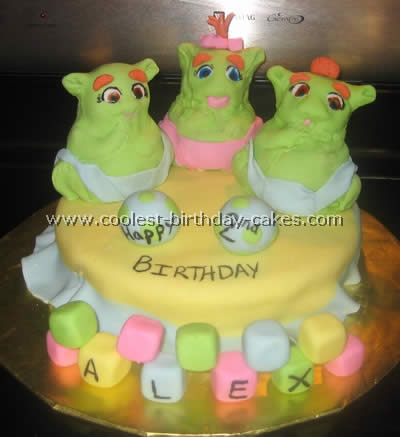 My two year old is obsessed with everything Shrek. I had been looking at a Shrek cake on this site and wanted to do something different so I chose the ogre triplets from Shrek the Third. My little boy also loves Gingy so we made gingerbread cut-outs together complete with broken legs stitches and the purple gumdrop buttons! He was in charge of putting on the buttons!

I made one 10 inch round layer from a box mix and covered it with Wilton pre-made fondant flavored with a little butter flavoring. I wanted it to look like a baby blanket so I chose pastel yellow and blue. I purchased the Wilton stand-up mini-bear pan for the triplets. I had to do a little carving around the ears and nose to turn the bears into the ogres. I then covered the ogres in green fondant and formed their ears and arms with the help of toothpicks and a small decorating brush. I made the hair, hair bow, and eyes and let them dry out a little before applying them to the cakes with a little water. I painted on the eyes and eyelashes with food coloring.

When the triplets were done I arranged them on top of the Shrek cake with no supports needed. I then made little blocks and balls out of the left-over fondant and wrote “Happy 2nd Birthday Alex” on them with an edible food coloring marker. The cakes and gingerbread men were a big hit at the party and the look on my little guy’s face made the hard work worth it! 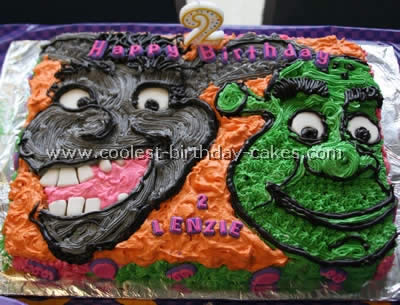 I used two boxes of Betty Crocker white cake mix for this Shrek cake. I only ended up using a cake and a half. Everyone commented how delicious and moist this cake was. I have found that it is the best for birthday cakes. The icing was made from 8-10 cups powdered sugar, three fourth cup milk and two cups butter-flavored shortening mixed together until creamy and fluffy. I made the green, grey and orange with food coloring gel. I have found that the tubes are super easy to use and store.

I used blue, green and yellow to make the bright Shrek color. The donkey’s color was a purple. I mixed blue and red until I had an off purple color like you would think to use for Eyore colors. It ended up being a good way to make the grey. I used canned icing for the Donkey’s tongue in pink and the black canned icing for the outlining. And I just began filling in like the two characters where simply a coloring book. If I felt like I had made a mistake I just went over the icing with more icing. I used a lot of star tips. Not to make stars all together but to make a noted ribbed edge to the line of icing.

The first thing I put on the blank sheet of cake was Donkey’s teeth and Donkey and Shrek eyes. It was made from white rolled out fondant you can buy at Wal-Mart. Or you can make it by adding powered sugar until you can make a ball from your icing. I used a circular baby bottle cap to cut the circles for the eyes and I used the other side of the star tips to cut out the retina part of the eye. I set them down on the cake as a guide for where the rest of the face should go.

Donkey’s face is bigger than Shrek seeing as my daughter loves Donkey. I bought the happy birthday letter kit from the supermarket and added those as the last detail. The edges on the back of the cake, and part of the front of the cake were covered in hot pink colored icing. It gave the Shrek cake that girly touch. 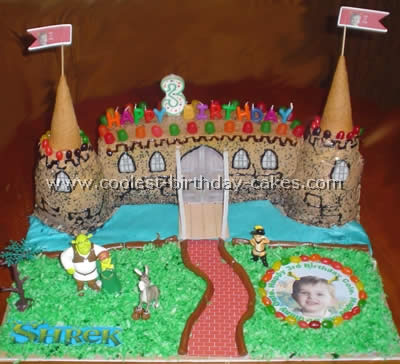 My son is Shrek obsessed so what could be better than to make him a Shrek cake! I made the castle by making sheet cakes, freezing then carving. The towers are simple round cakes stacked with a dowel to support and the rectangle castle is one and a half 9×13 pans cut in half.

Make sure you use the dowels; otherwise you will have a castle disaster. Once the castle was done I just dressed up the setting with colored coconut candies and a drawbridge. My only advice would be to freeze your cake and do this in stages.