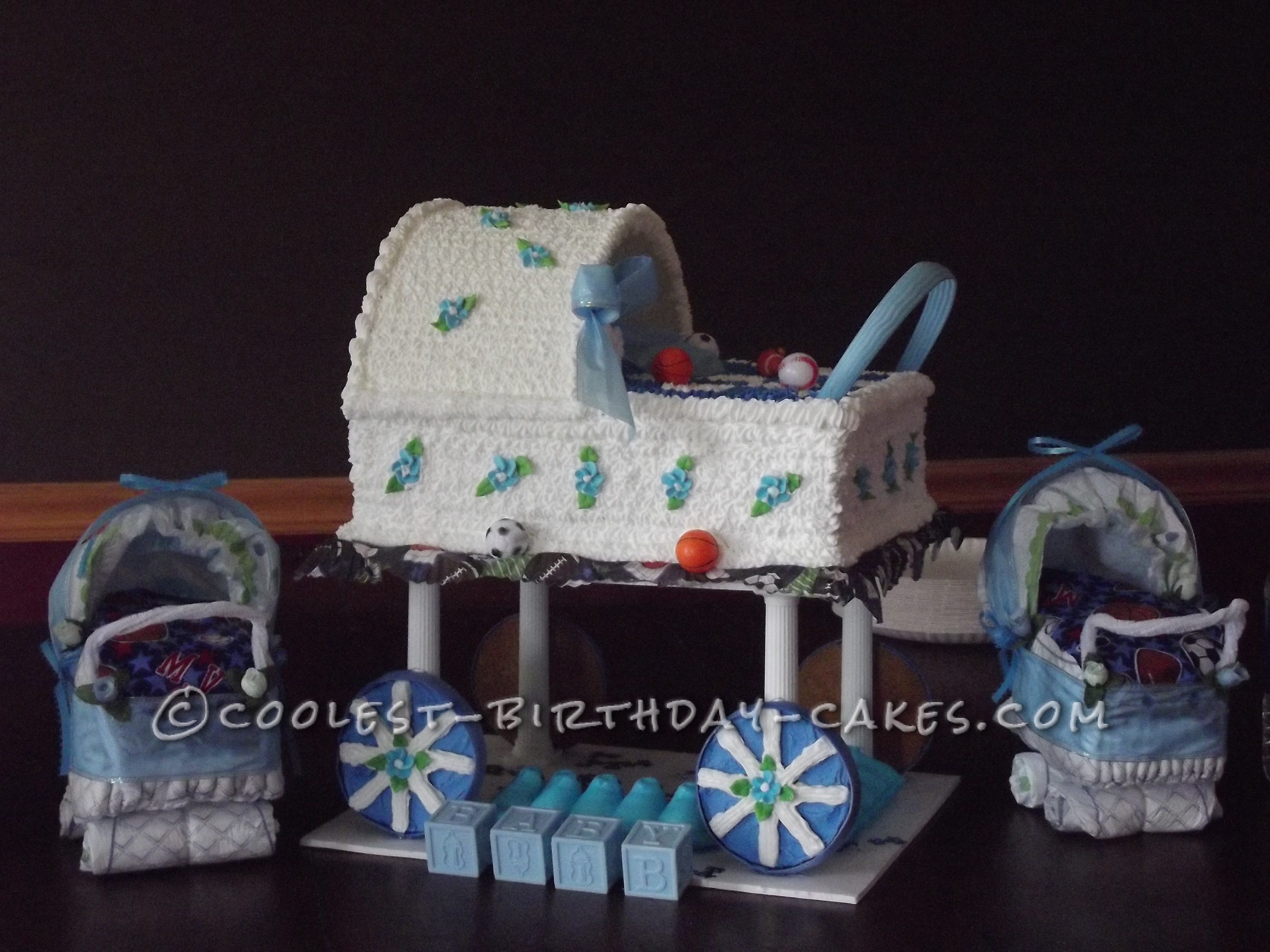 I have always wanted to do a carriage cake and never had the guts to do it until now. My stepdaughter had miscarried over a year ago and when we found out she was expecting again, we were so excited. Then we found out she was having our first grandson. I knew I had to try making the carriage cake. At the same time, I had to keep it a secret from her. So began my creativity.

I first decided to make the hood of the carriage. I used plastic canvas cut and shaped to the size I needed. I then star tipped it with royal icing and let it harden. I made small blue flowers and leaves with the royal icing also. I then made my boards and stand for the carriage. I used foam board for durability. I glued 2 pieces of foam board for under the cake itself. I marked where my columns would go and cut through 1 layer of the foam board. That way, when I made the cake, I could keep it separate from the stand until ready to set it up. I hot glued the columns to the bottom board for the stand.

I used cupcake cups spread open to make a ruffle around the board. I decide I wanted 3 different flavors of cake- Carrot Cake, French Vanilla Cake, and Lemon Cake. I made divider boards for my half sheet pan and poured each flavor in longwise. Simply remove the dividers and you have 3 flavors in one cake. I then cut my sheet cake in half and stacked it for 2 layers. With white butter cream icing, I star tipped the sides of the carriage bottom. I smoothed icing thinly on the top. Then I star tipped a pillow of white with a blue ruffle. I then attached the carriage hood to the top of the cake. You star tip around the edge of the hood to blend it in with the carriage body.

Then star tip a blanket of blue and white. I added little sports ball picks because of the sports theme for my grandson’s room. I attached the blue royal icing flowers and leaves around the carriage and across the hood. I attached a blue ribbon to the hood. I made the handle from a headband. My husband heated it with my hair dryer to shape it like a handle. I baked sugar cookies for the wheels. I iced them in blue and white and covered the edges with bias tape. I hot glued them to the board and the columns.

Then came the baby shower. Everyone was amazed and could not believe I made it. Everyone was asking me how I did that. One of the guests said she wanted to adopt me into her family so I could make cakes for her. I loved it. My stepdaughter could not believe I did this for her.  It was a total success and I have people wanting this cake for their baby showers now. I also made 2 little diaper carriage cakes to set beside the carriage cake. I had so much fun doing these for my stepdaughter. 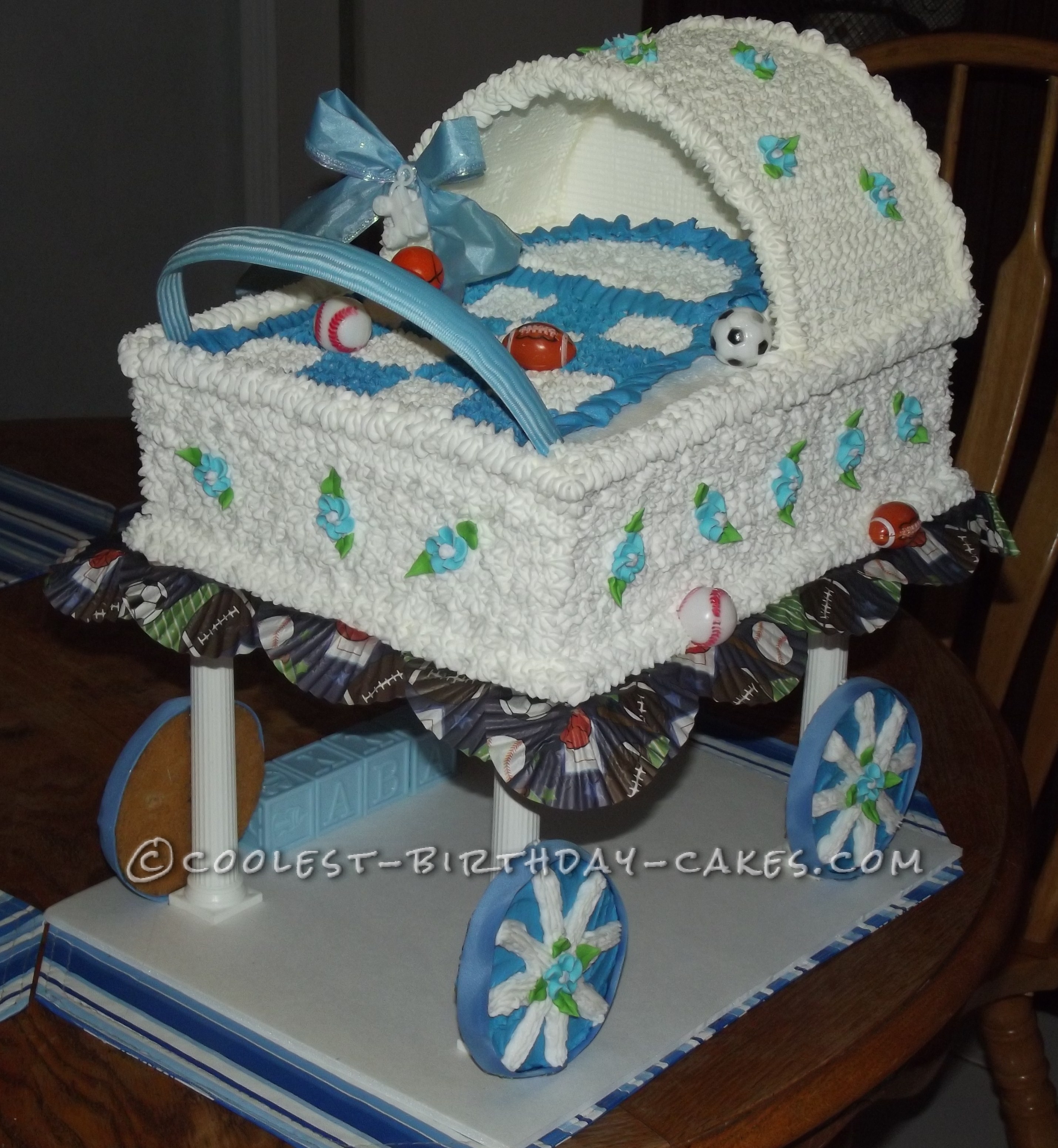 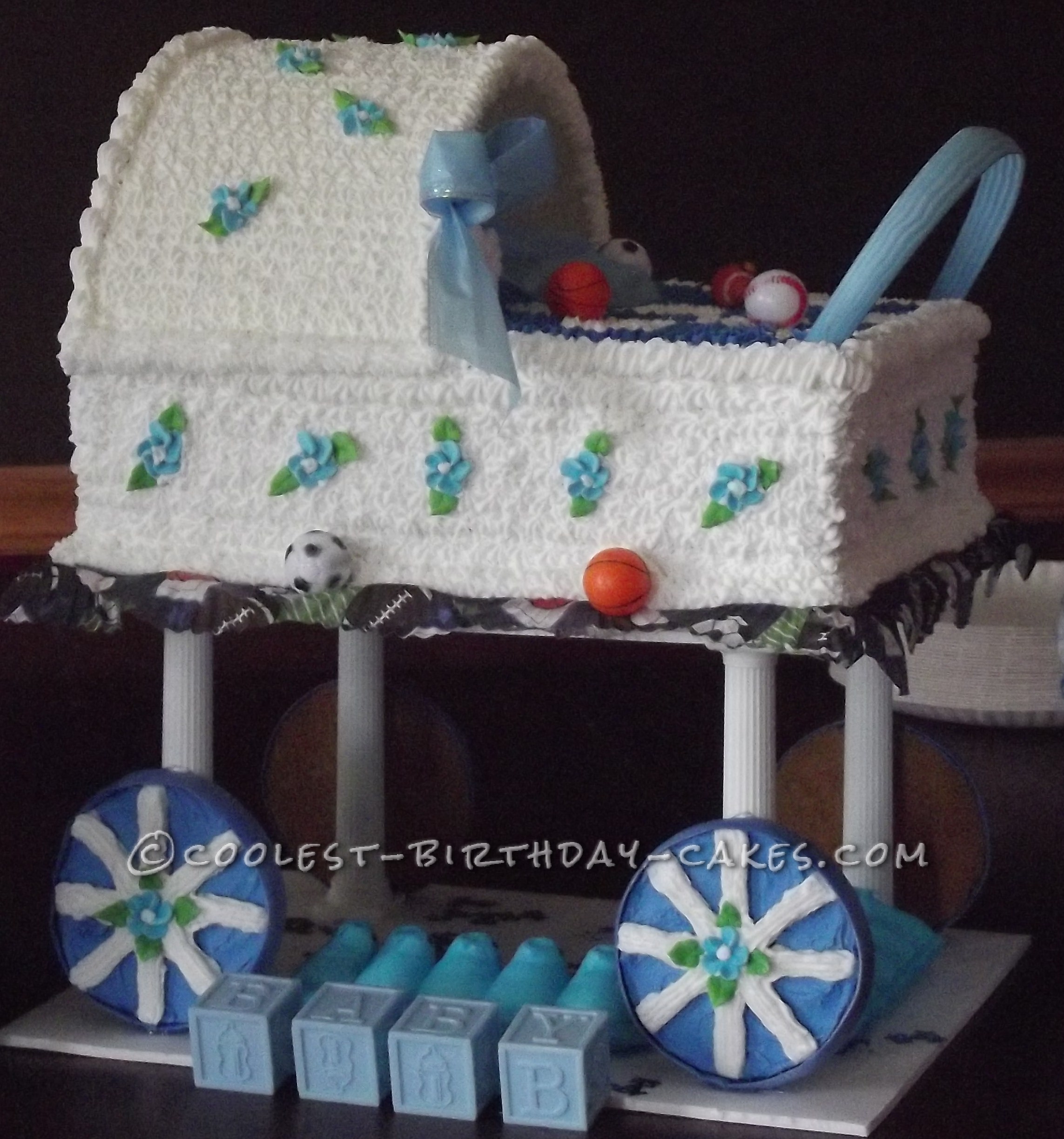