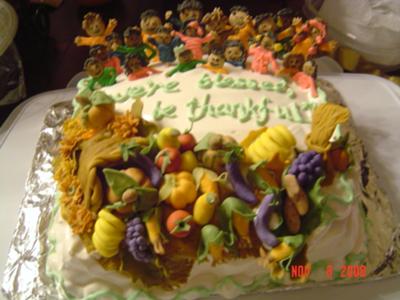 The cake is made of one recipe white cake mix with strawberry filling. I used Pastry Pride cool whip to ice the cake. It is much easier for me to ice the cake using cool whip. Put the Pastry Pride in the mixing bowl and whip for about 9-12 minutes using KitchenAid electric mixer. I made ahead of time the children’s faces using royal icing. I added different food coloring as needed to be used for the kid’s shirts and arms. Using tips 6-8 for the faces and shirts, using tip 1 for the eyes and lips. I also made the fall flowers made of fondant. I put a few drops of yellow cake coloring (Wilton) until I reached the desired color. For the cornucopia and the rest of the vegetables/fruits I also made it ahead of time using fondant. I added few drops of purple to make the eggplant and grapes; yellow to make the corn and green for the husk. A few drops of brown for the cornucopia and hay. A few drops of red and orange mix to the fondant for the tomatoes. A mixture of orange and brown cake coloring for the pumpkin. For the potato, I put some brown and yellow cake coloring and shaped it oblong and using a toothpick, I prick on the fondant to make the holes in the potato. I have pictures of those vegetables in front of me as my guide. Using the fondant, I shaped it into different vegetables and fruits, just like playing with a play dough. It requires a lot of imagination to create these miniature fruits. These miniature fruits/vegetables are 1/2 to 3/4 inch in size. I used an 8″ square cake pan. I should have used a 13″ rectangular cake pan to give room to all the creations I made. I made the cake and and once it was cooled, I iced it and place all the characters I made ahead of time. Finish up the cake with shell borders and caption.