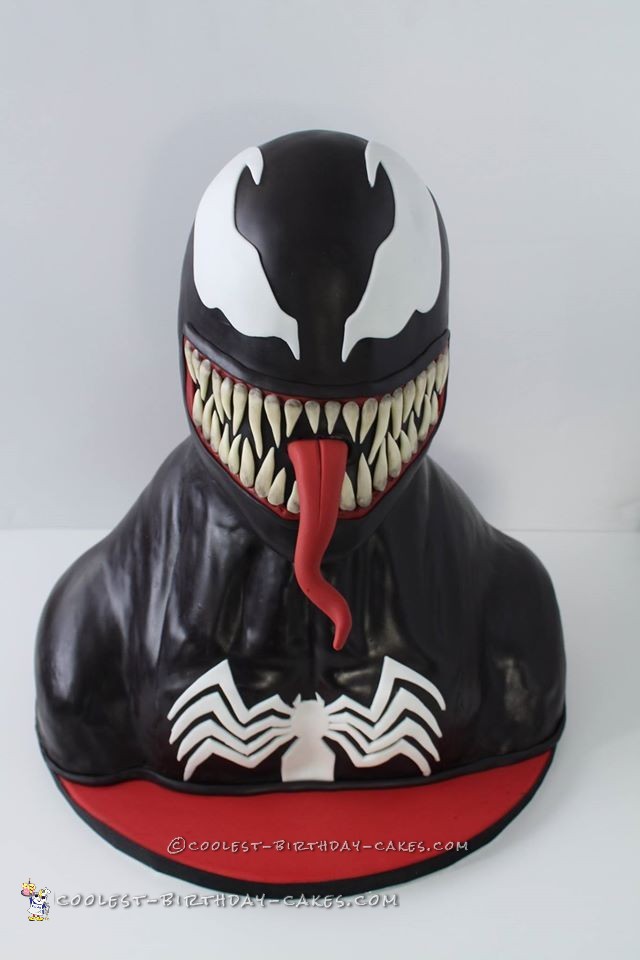 I had a VERY last minute order for a 3D sculpted Venom cake and matching cupcakes. I was more than happy to do it because my husband is a huge comic book fan. He was very excited throughout the entire process as he watched the sculpture come together. In fact when I was done he was so in love with the cake. He actually didn’t want to say goodbye to Venom when the customer came to pick him up.

I’ve only ever done a sculpted a helmet cake before. I knew this would be much more involved but I’m always up for a challenge! I spent hours researching 3D bust cakes, I found that a lot of people used Styrofoam heads attached to a cake torso, I found this discouraging because I like to keep the cake 100% edible (save for the boards and dowels). So I sought after a different method and decided to use Rice Krispie Treats to sculpt the head. I took a thick hollow plastic dowel and staked it through the “neck” and “chest” of the cake. I coated the dowel with melted marshmallow and started building onto that with the RKT.

After building and building I finally had a proportionate head. I carved some muscles into the crumb coated cakes and proceeded to coat the entire sculpture in buttercream icing. I smoothed the icing as best as I could with a Viva paper towel and then started to cover the body in home-made black fondant. Working in large sections, I tried to conceal the seams as best as possible.

Nine stacked and sculpted cakes, a box of Rice Krispie Treats, several pounds of buttercream and fondant later it was time to put on some details. My husband helped advise me in the placement of Venom’s eyes and mouth. I’d have to say my favorite part of the sculpture was the tongue which I made ahead of time from red gumpaste with a pop stick in it. Once it finally started to come together it was about 4am. I still had to attach teeth but since the customer wasn’t coming until the afternoon I decided to allow myself a few hours of sleep.

Wrapping Up the Venom Cake

When I finally finished up my Venom cake was 16” tall and 16” wide and weighed about 1,000 pounds. After I had a little photo shoot with my creation I went to box him up and ran into a teeny problem, his tongue was sticking out too far to close the box! I ended up cutting a little hole in the box to allow his tongue to stick out. I really wish I took a photo of this but my brain was barely working on 4 hours of sleep.

Needless to say the customer didn’t mind, he just laughed when I explained the creepy tongue hole to him. He was beyond excited when he picked up the cake. Apparently, he had been pulling a prank on his son by telling him that no one had made him a birthday cake.

When he showed the massive Venom cake later, his son didn’t believe it was a cake. He thought it was a huge action figure! I took that as a job well done and finally returned to my bed. It had been calling me since 3am when our furnace broke and our heat stopped working in this cold winter month.. But that’s a whole other story.