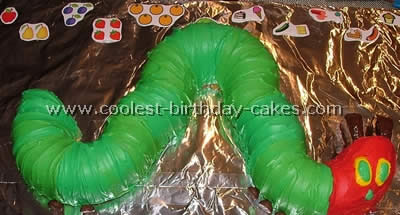 My nephew’s favorite book when he turned one was the Very Hungry Caterpillar. For his birthday cake I decided to make the Caterpillar and it turned out to be an amazing cake.

I used three bunt cakes that I cut up to make the body. I made two different colored green icings to cover the body and used chocolate kisses for the feet. I also printed out the items that the caterpillar ate in the book and put them around the border of the cake. My nephew loved his cake!

Cake by Jill A., Westford, MA

I made this amazing cake for my daughter’s first birthday. It was baked using a bundt pan and cut into three pieces and reassembled into the caterpillar shape. The “hump” piece must be larger than the other two to make it the right shape. (I cut a template with paper and played with it until I got the right shape so I knew exactly how to cut the cake.) I made an extra large cupcake for the head.

It was frosted with buttercream. I made two different green green/blue colors and applied it kind of swirly with a knife to the body and red for the head. I piped yellow around the eyes and the base of the body. The feet were gummy sneakers I bought at the candy store. I bought rainbow gummy worms and “threaded” them onto wooden skewers about 1/2 to 3/4 of the way up to make the antennae.

Compared to other cakes I’ve made this one was easy! The gummy sneakers were a great find. I wasn’t sure how I was going to do the feet. I was very pleased how it turned out. (For lunch we had caterpillar chicken kabobs that had cherry tomato heads with clove eyes and frilled scallions for tails!)

I wanted to make a Very Hungry Caterpillar cake but one that reflected the book clearly so my one year old could identify it more easily. I made a basic large lemon sponge cake, covered it with roll out icing (stuck down with lemon curd). I traced the leaf from the book, cut it out a bigger version from paper to use as a template. I cut out the holes using the smallest round lid I could find (I think it was a food coloring bottle top in the end) and painted the leaf with green icing coloring.

I cut a rough strip and painted it brown for the tree trunk. Once the colors were dry I stuck the leaf and trunk on with water. The caterpillar was made by slicing stoneless dates to create small rings covering each ring in green roll out icing and fixing together with short bits of cocktail stick the head was just a round red ball of icing.

The antennae were brown roll out icing shaped around the end of a cocktail stick and stuck in. The feet were dark chocolate drops. I wrote on an extra bit of icing with a standard ink pen and simply removed it before cutting the cake. I used cutters for the letters.

Everything you see on this amazing cake was made from roll out icing and the other things mentioned above. The whole thing took an evening to decorate and was actually quite easy to do, less stressful that a 3D cake!

My son who was turning 3 just loves the book, The Very Hungry Caterpillar. So we decided that there was no other choice but to make him a caterpillar cake for his birthday. I use two bundt cakes. One cut in half and arranged appropriately. I used the second cake to fill in the top curve and the head. Then I simply frosted it with buttercream frosting in the appropriate colors.

I used crushed chocolate wafers for the dirt.

The leaves with Happy Birthday and his name were printed on the computer, cut out and just placed by the cake.

This was by far the simplest cake I have decorated and everyone said it was an amazing cake.

My son loved the Very Hungry Caterpillar by Eric Carle. So, for his first birthday my husband and I wanted to make an amazing cake using the theme.

We made two bunt cakes. For the body, we cut one bunt cake in half and turned one half to make the body. We used the second bunt cake for “parts” to fill in where we needed the extra curve in the top. We used a mini round bunt cake for the head.

We then used white icing, adding food coloring to make the red of the head, the yellow around the eyes, and the greens of the body. We used chocolate kisses for feet, and chocolate icing to cover the antennas (which were made of strips of leftover bunt cake).

We iced the body with different shades of green – just like the picture in the book – adding yellow food coloring here and blue there. It was a giant hit. Try as we might, we have never been able to make a cake that looked as good as this one.