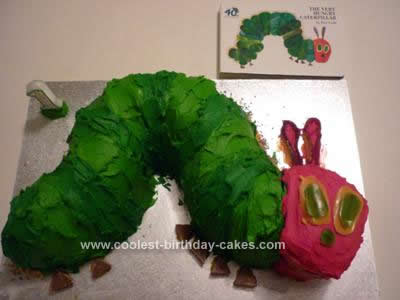 For my daughter’s first birthday I decided that I wanted to make a cake based on one of her favourite books. After narrowing it down to ones that wouldn’t take me ten years and a thousand dollars to do justice to, I settled on Very Hungry Caterpillar Birthday Cake.

I made the body out of buttercake, divided it into two bowls and tinted them both a different green before putting random blobs in the tin so that the inside of the body would match the mottled green of the outside. I used a bundt tin to get the shape right, but it needed a triple quantity of mixture to fill. Luckily I had done a test run the week before with only double quantity and knew it would not be enough. I had to cook the cake at a lower temp than normal so the inside would cook without the outside burning.

I cooked the head in a round cake tin using a gluten free packet mix as we had guests attending that were celiac. I tinted this cake mix red (after checking that the food colouring was also gluten free). This made it easy to tell which bits were gluten free during serving.

Once all cooked I cut the body to the desired shape… easy to do with just the one bundt cake. I cut the head shape out of the round cake, but it was a lot thinner than the body, luckily it was small enough that I could cut another of the same shape and stack them on top of each other, perfect height!.

I iced over all cut areas with a thin layer of runny icing to stop crumbs sticking to the frosting. While it set in the fridge I made up five colours of buttercream frosting: 3 green, 1 red, and one yellow.

The body was then iced with all three greens in blended stripes (purposefully rough rather than smooth), the head in the red, and a yellow stripe piped along the top edge. I used multicoloured sprinkles on the yellow. I cut the eyes and nose out of flat fruit snacks. I put yellow frosting under the eyes so that you could see them on the head and green under the nose and inner eyes to preserve their colour. The antenna were also made from frit snacks. My only regret was that I should have tinted the frosting inside them a slightly more purple colour rather than just using the red.

Since I live in Australia I don’t have easy access to Hershey Kisses for the feet, so I cut chocolate squares in half instead and stuck them to the cake board with small blobs of frosting.

All in all I was extremely pleased with how it turned out and received heaps of compliments from everyone at the party. I actually found it to be quite a simple cake to do as most of the shaping work was done by the bundt tin! No difficult sculpting required. 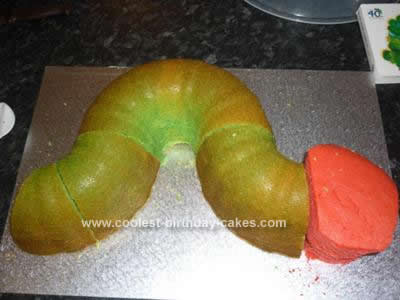