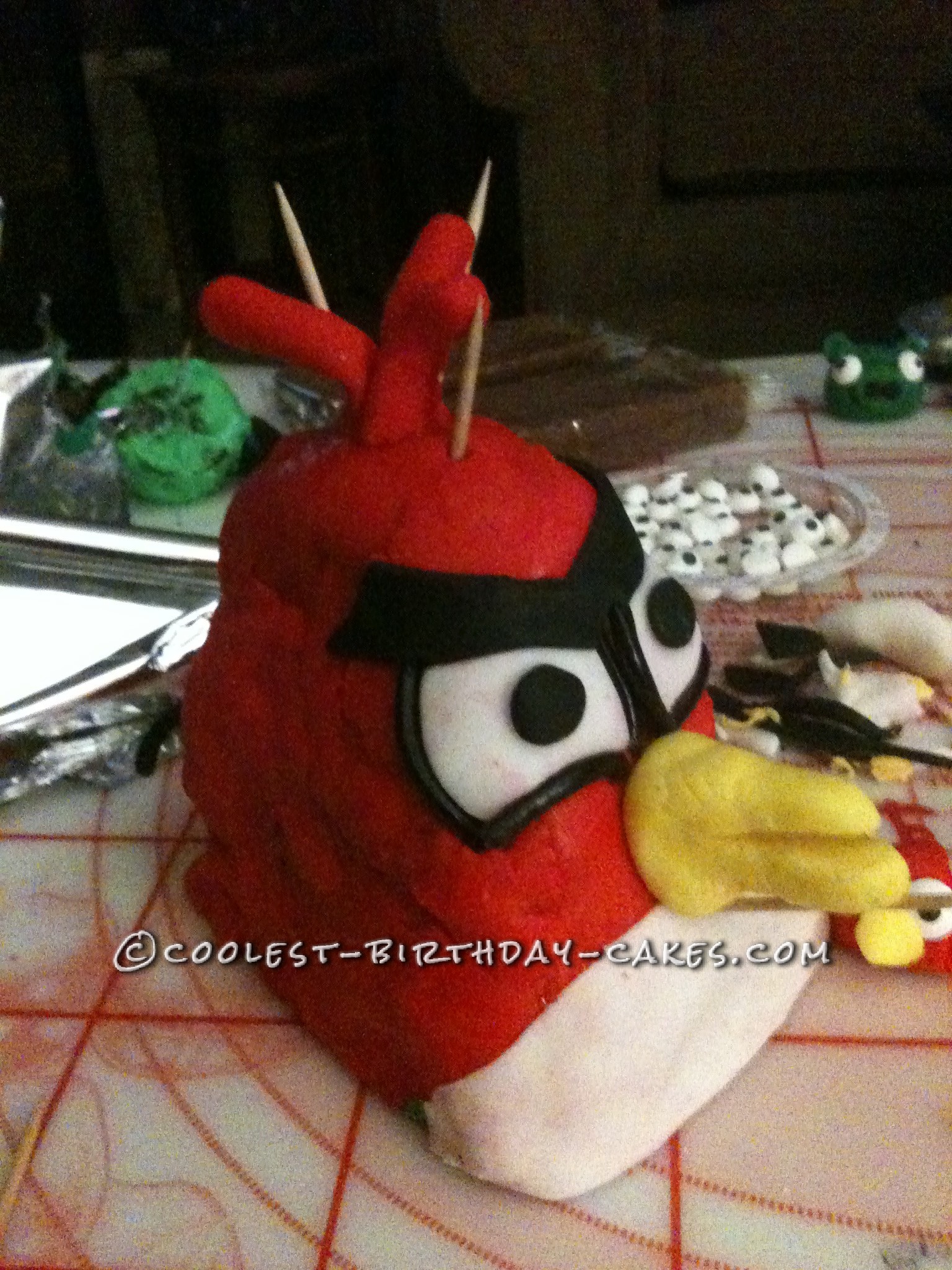 I love to bake and I am very creative. I took one Wilton class at a local store, got sick and could not finish, so what I learned was pretty much nothing….lol.  My great grandson was turning 6 and I wanted to make the cake. He loves Angry Birds, so his Mom told me “YES” with some reservations. I was very excited to try my hand at this, so I bought some fondant, looked at pictures on line, got some ideas and went at it.

I first make a basic white cake, a 11×18 and then a 9″ round. I had a plan, after I frosted the sheet cake blue, I used 3 bags of mini kit kats upright around the edge, then I added the 9″ round and frosted it blue also and put the mini kit kats around it also. Then the fun began, I used 1 pretzel rods, 1 I broke in half and attached it using melted chocolate to the longer pretzel rod to make the sling shot, then I poured melted chocolate on it, it was on parchment paper, then put it in the fridge to harden. Then I turned it over putting more chocolate on it, and I did it to both sides twice using all the chocolate (1 whole bag of chocolate chips).

Then when it was hard, I took it and carved all the excess choc off of it, added licorice for the rubber band and stuck it in the cake, then added a boulder that I made from fondant.  I took more melted chocolate and used a mini Styrofoam bowl to make the nest for the jelly beans.  On top of the “Hill”, I used Nutty bars stuck together with green icing to make the pilings.  I put extra green icing trying to make it look like grass.  Then I did the green icing all around the top, and the bottom of each layer to represent grass.

Then for the fun part, I have 4″ pans that I made brownie mix in, frosted those, stuck them together and carved the large red Angry Bird.  I covered him with rolled out fondant, used fondant for all parts of him, and used licorice laces to trim his eyes.  I used fondant for his beak, made it one piece and sliced it and kept it open with a toothpick until it could set up.  Then, I made all the piggies, and all the other birds using fondant. I had so much fun and everyone was impressed, even I was. I really enjoyed doing it and now I making a Pokemon cake for my other great grandson’s birthday!!!  Thanks for letting me share. 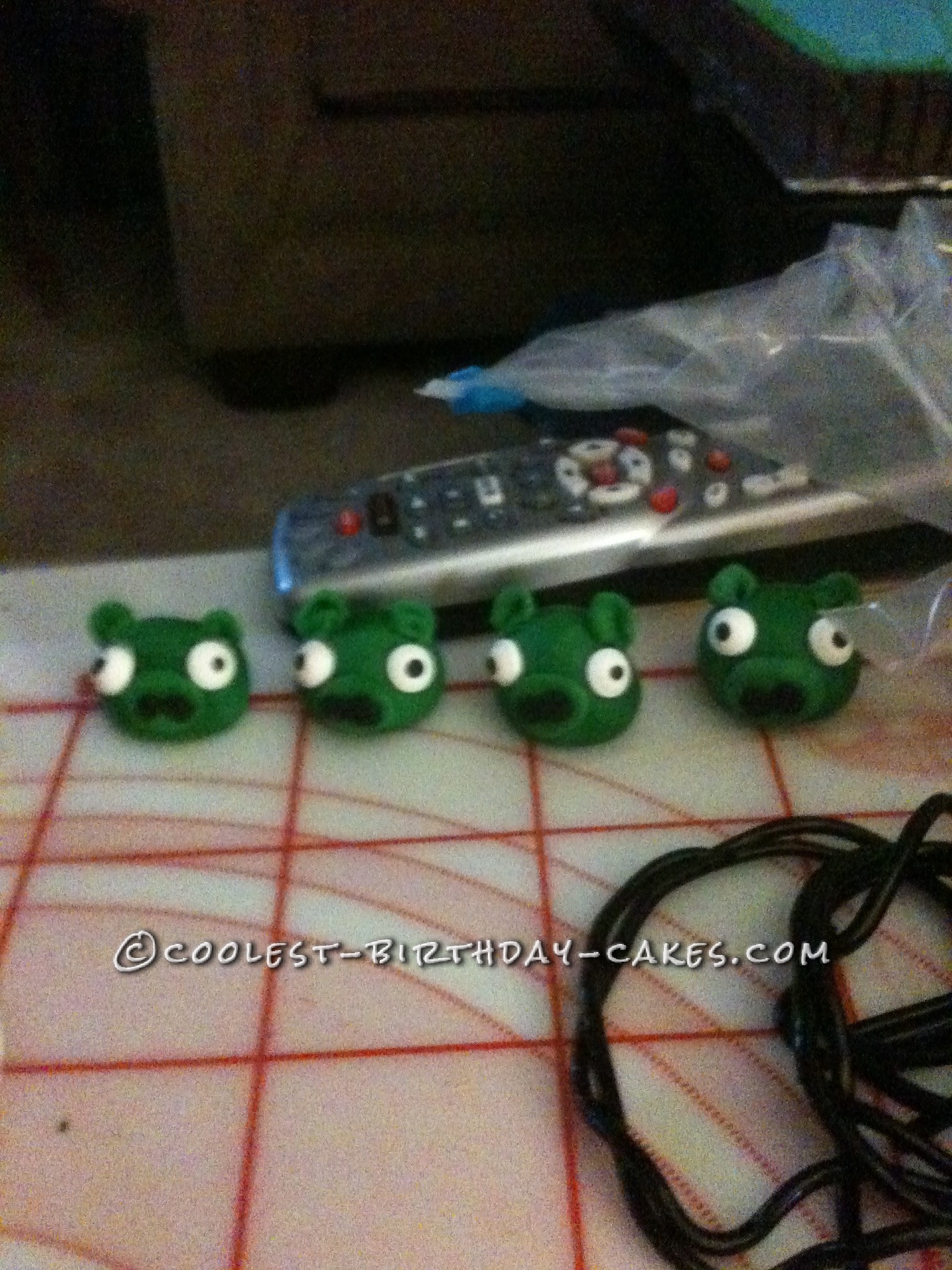 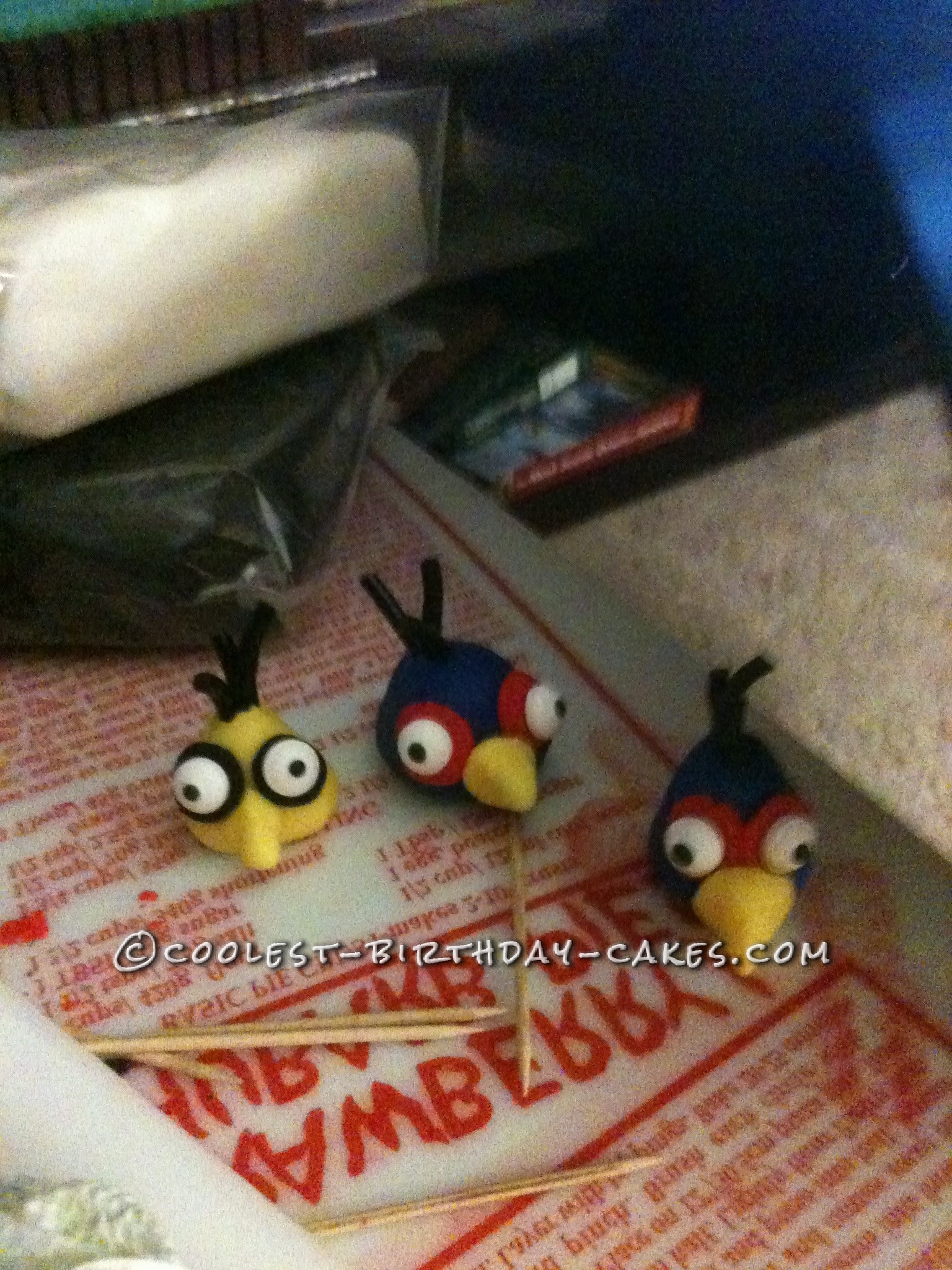 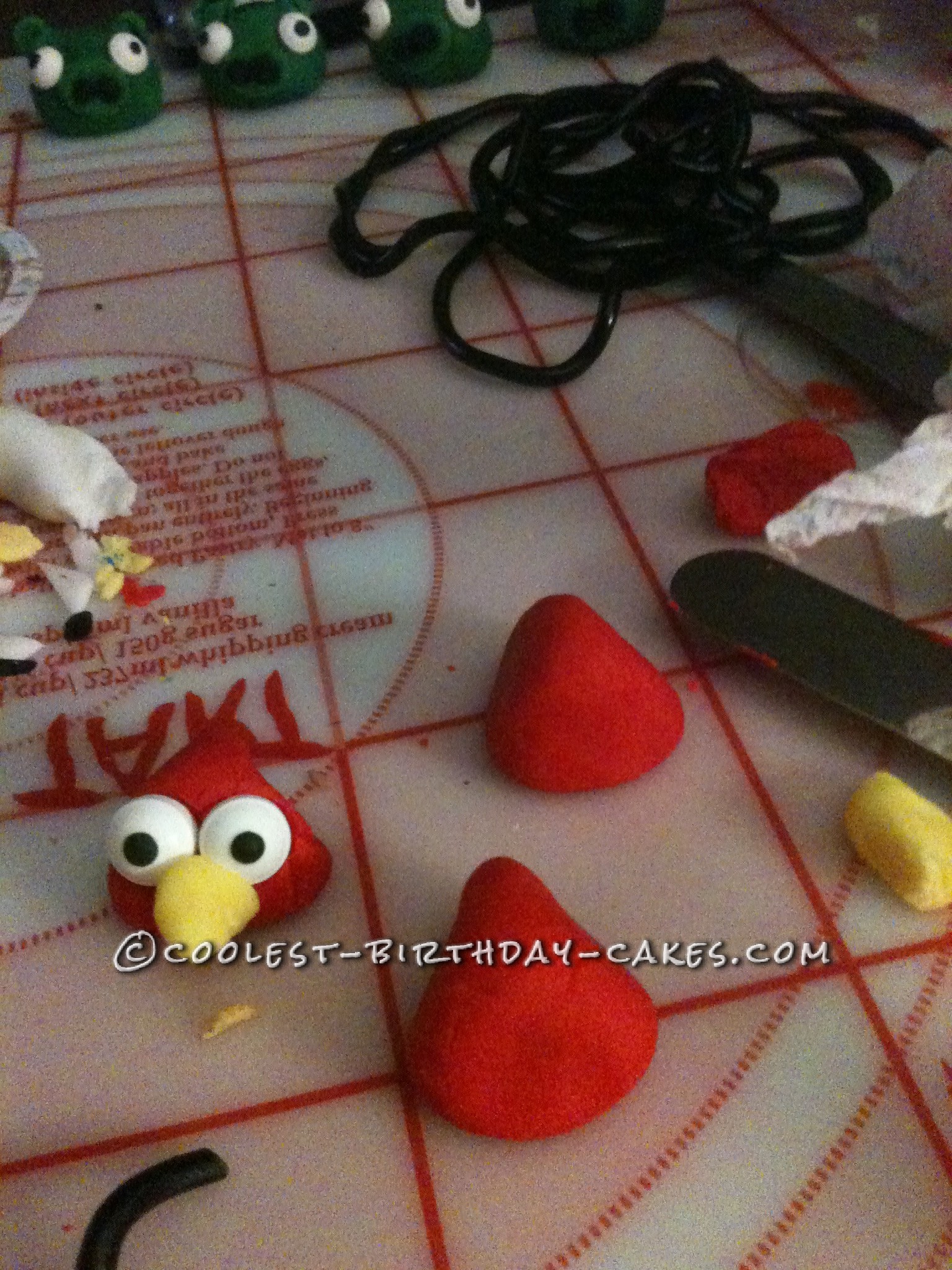 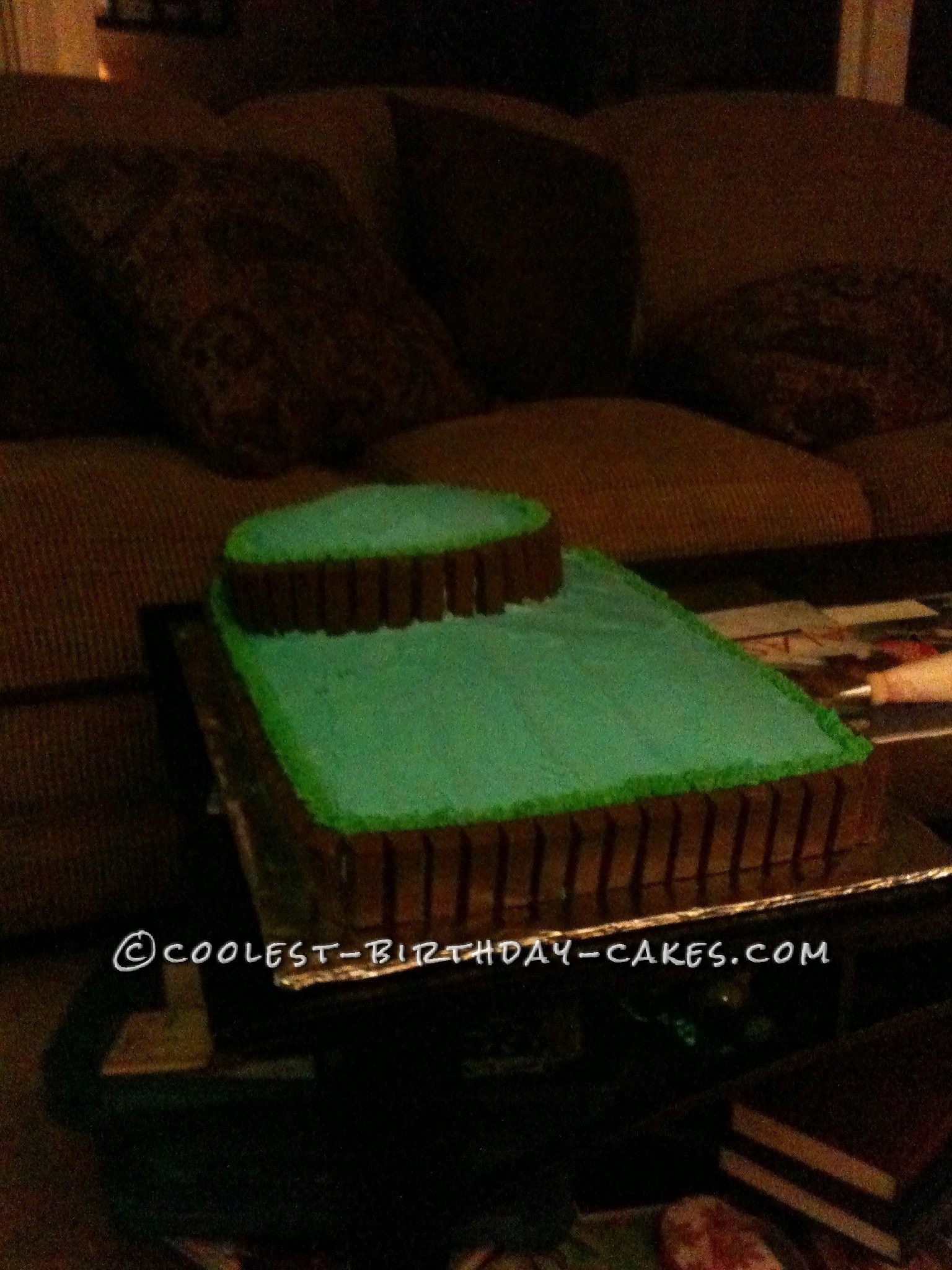 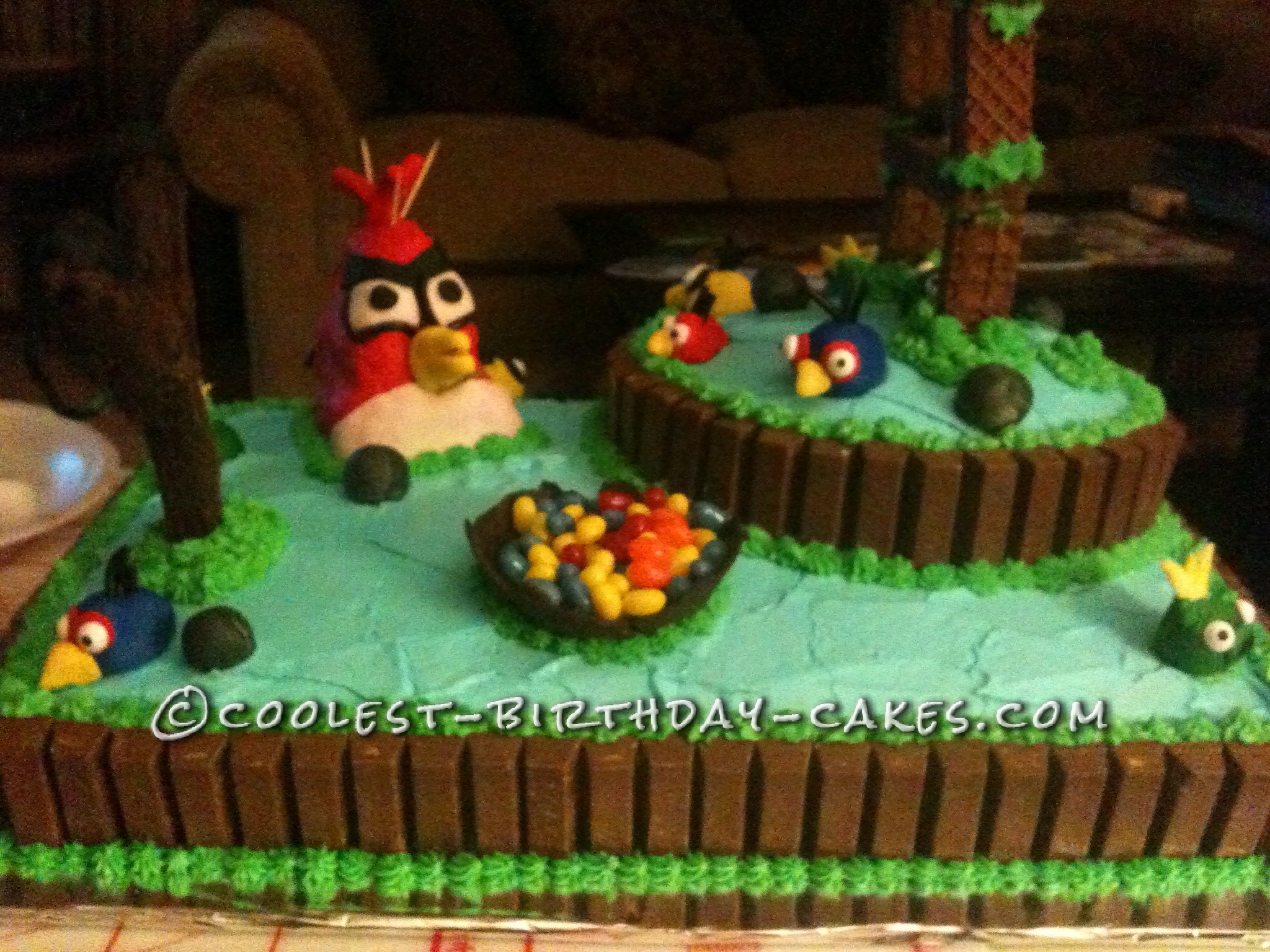 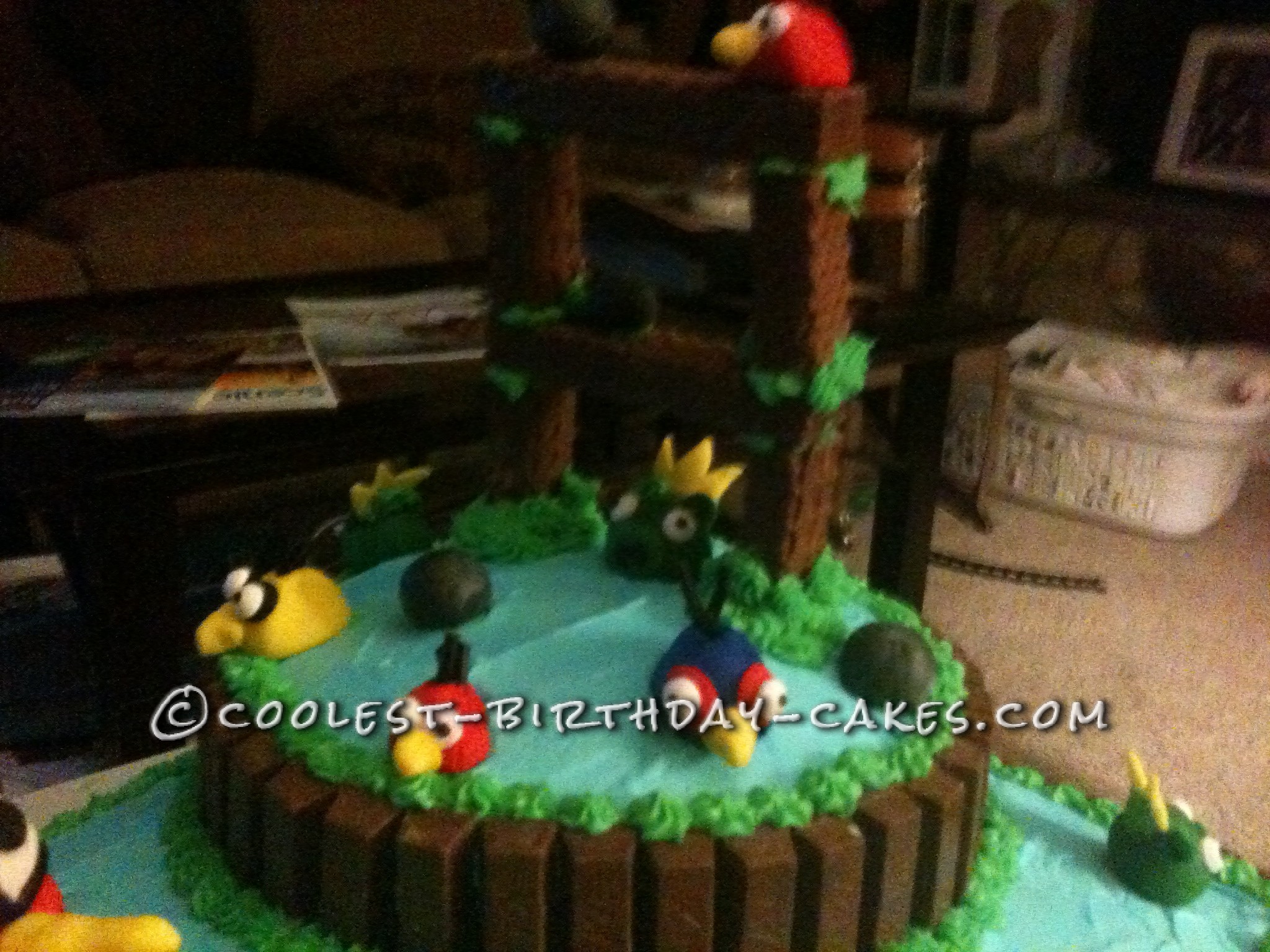 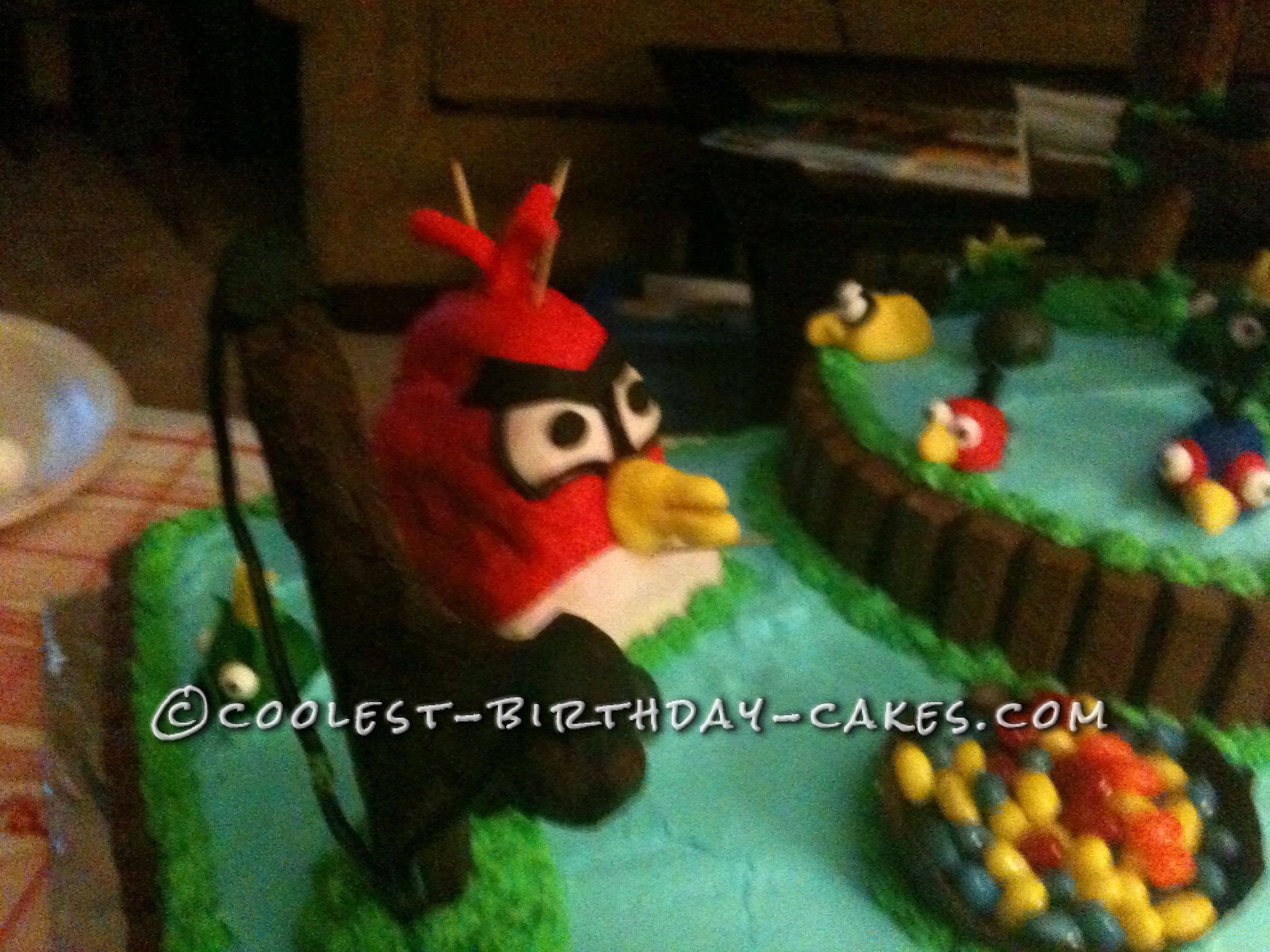 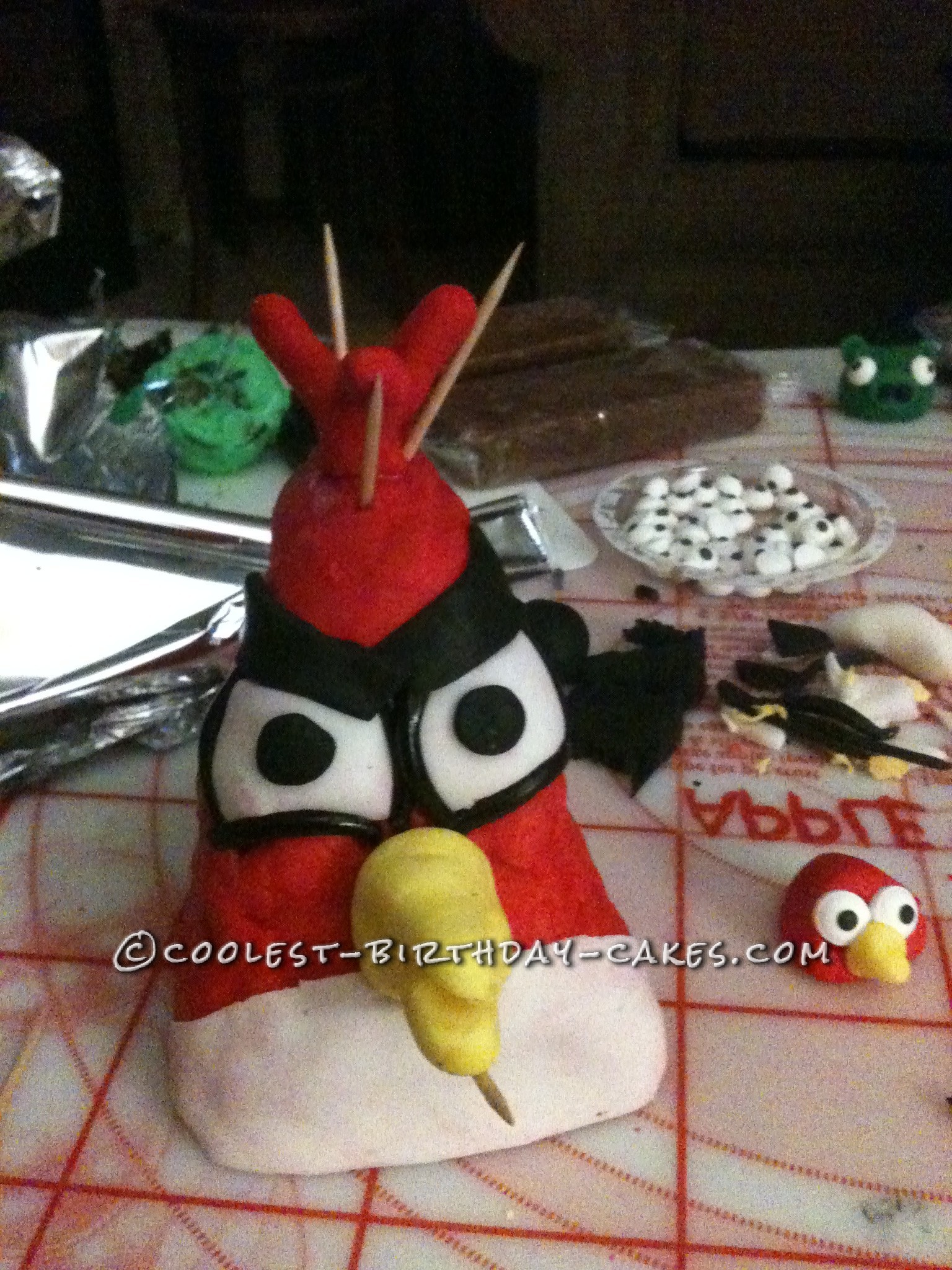 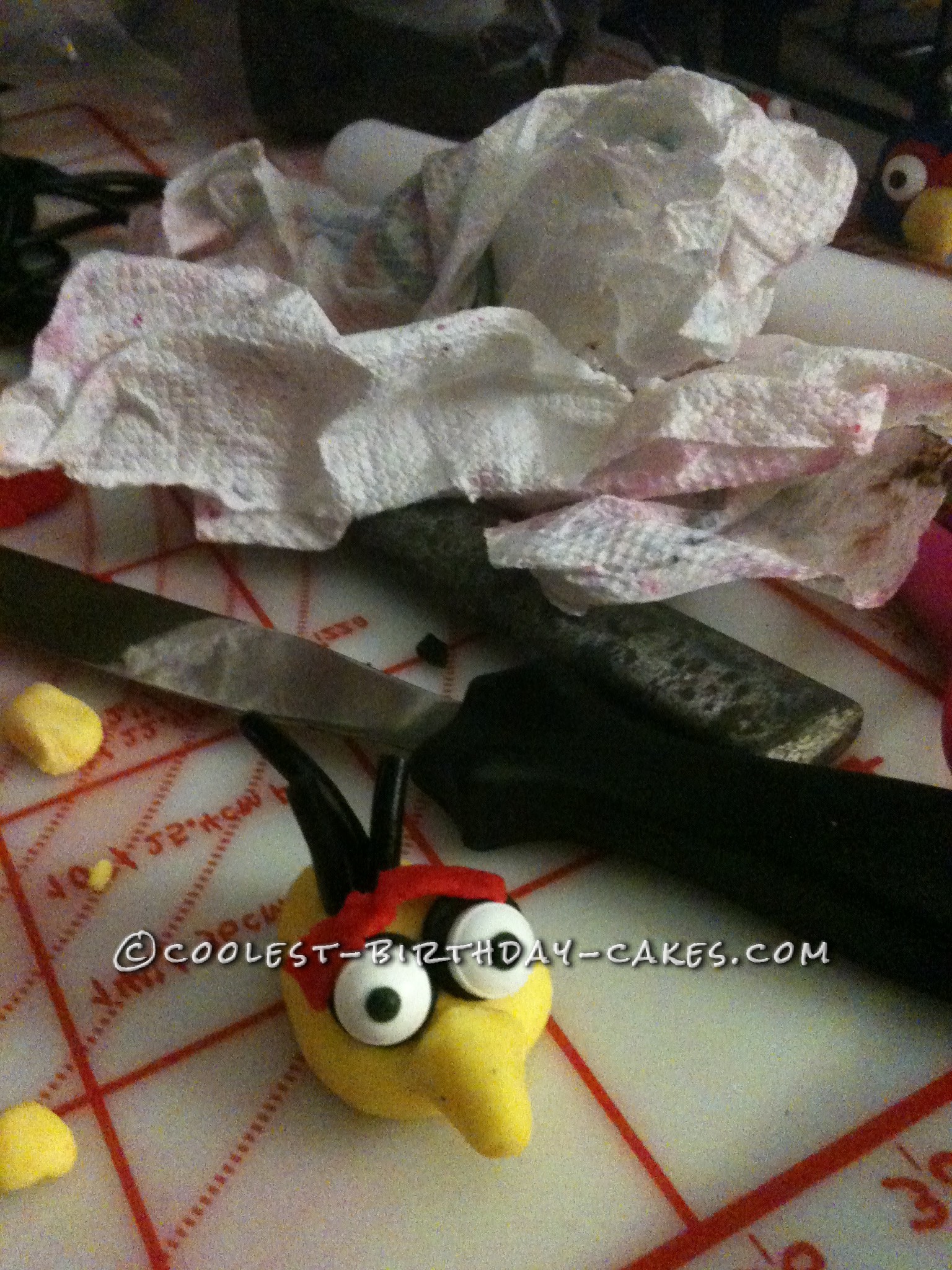