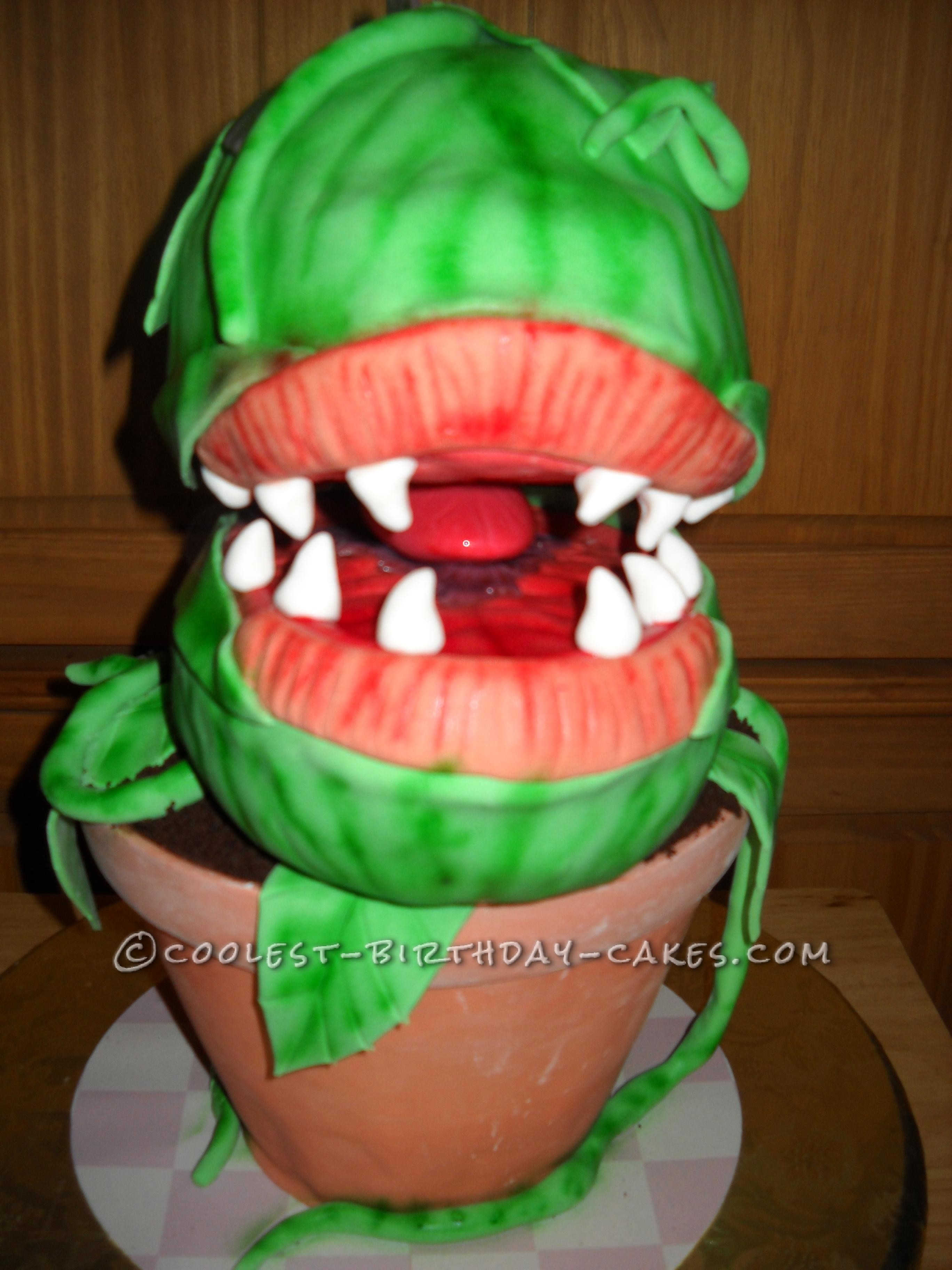 Our “Audrey II” cake was made for an actor in the lead role of “Seymour” in a stage production of “Little Shop Of Horrors”.  This cake was so much fun to make!

The cake board is a wooden disk covered in food grade gold foil.  I used a center post attached to the cake base for stability.  The “Clay Pot” was made of 5 layers of cake supported internally with cake boards and dowels.  These layers were filled with buttercream, crumb coated with buttercream, and covered in terra cotta colored fondant.  The pot was dusted with confectioners sugar to add the effect of a real clay pot.  Two pieces of wooden doweling are also added and extended slightly above the top of the pot for support of the head.  These will not be seen in the final product.

“Audrey II’s” lower jaw was made from two layers of cake carved in a shape similar to an egg with the cake board being in the flat area which is the interior of the mouth.  The board had a hole cut in it toward the rear for stability when placing on the center post.  These cakes were filled with buttercream and crumb coated, then covered in fondant with the flat/board side down, bringing the fondant down and over the board which will become the interior of the mouth.  This will allow the fondant to grip over the edge of the board and later be covered with the floor of the mouth and tongue.  A small piece of cake board is shaped and has a hole made in it.  The small piece of board was slid onto the center post onto the pot and the lower jaw cake in turn slid onto the center post onto the small piece of cake board.

Fondant is rolled and cut in a leaf shape and added to the bottom of the mouth.  A toungue is shaped and sculpted, and also added.

The upper part of “Audrey II’s” head is made in a similar fashion as the lower jaw by using a three layer cake.  The cake board for this cake also has a hole in it to be slid over the center post for stability.  In this case, the fodant is covered over the curved part and brought down slightly under the cake board which will become the roof of the mouth which is iced and covered in fondant.  This cake is slid onto the center post which is now no longer visible.  Fondant is rolled, shaped, embossed,  and added as the roof of the mouth.

Fondant is rolled and scupted into lips and added.  Teeth are shaped from fondant and added.  Jaw “leaves” are added as are all leaves added which will bond the lower jaw and head together for stability.  This will also cover all gaps.  Vines are added.  All green areas were airbrushed.

The finishing touches are the tile floor which is made to imulate the one in the color version of the movie and is made of edible image materials, the “dirt” in the pot which is made of crumbed chocolate cake, and the interior of the mouth airbrushed with water to make it shiney.  I hope you’ve enjoyed viewing this cake as much as I enjoyed making it! 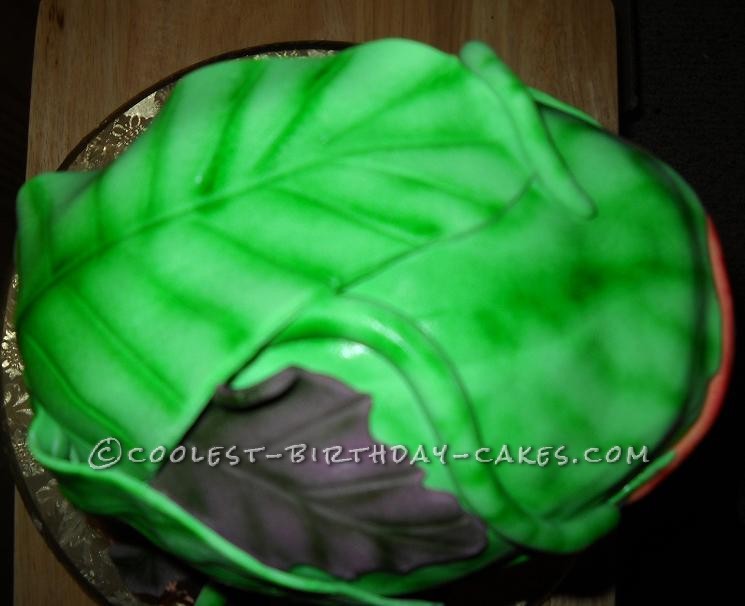 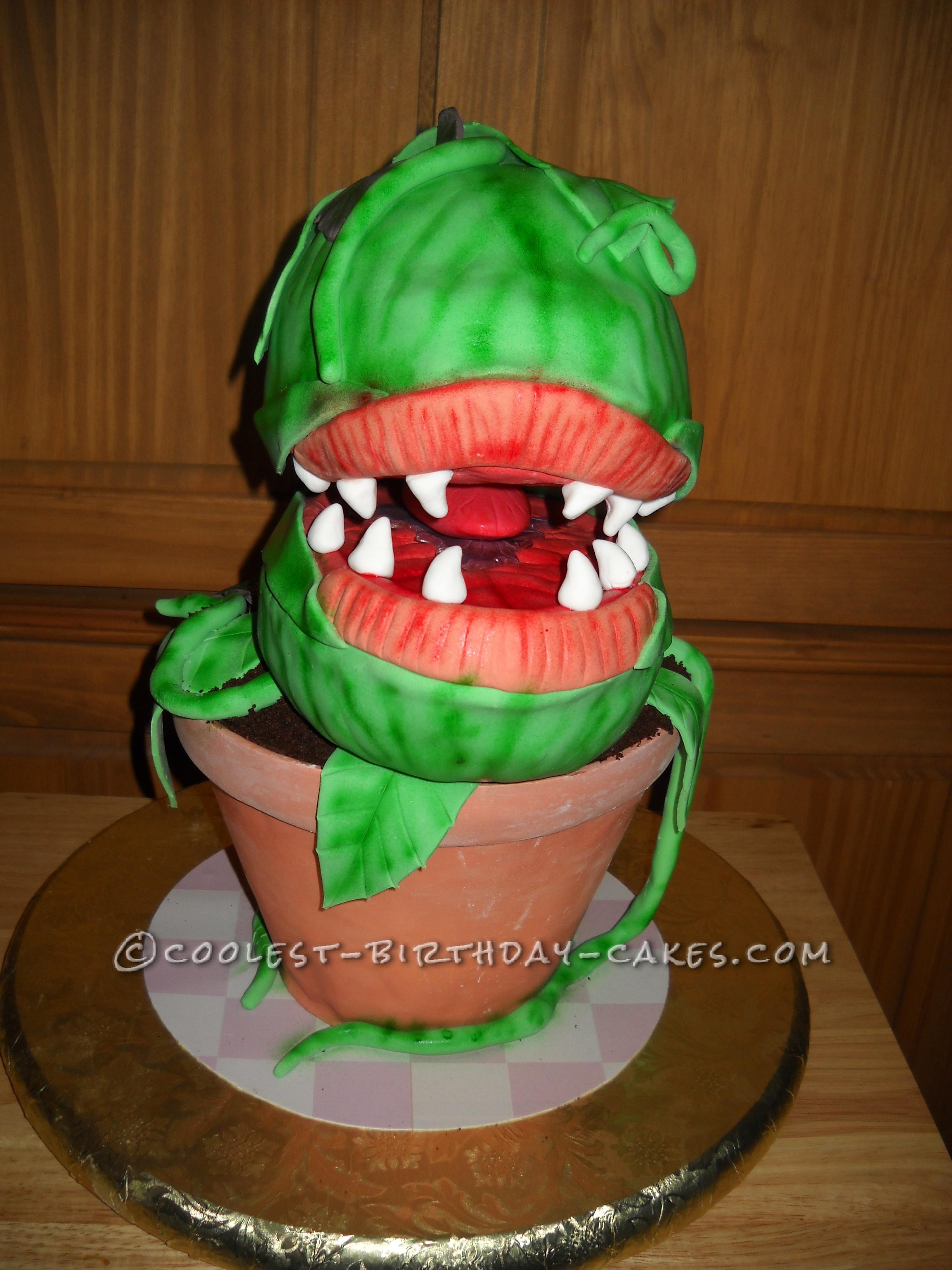 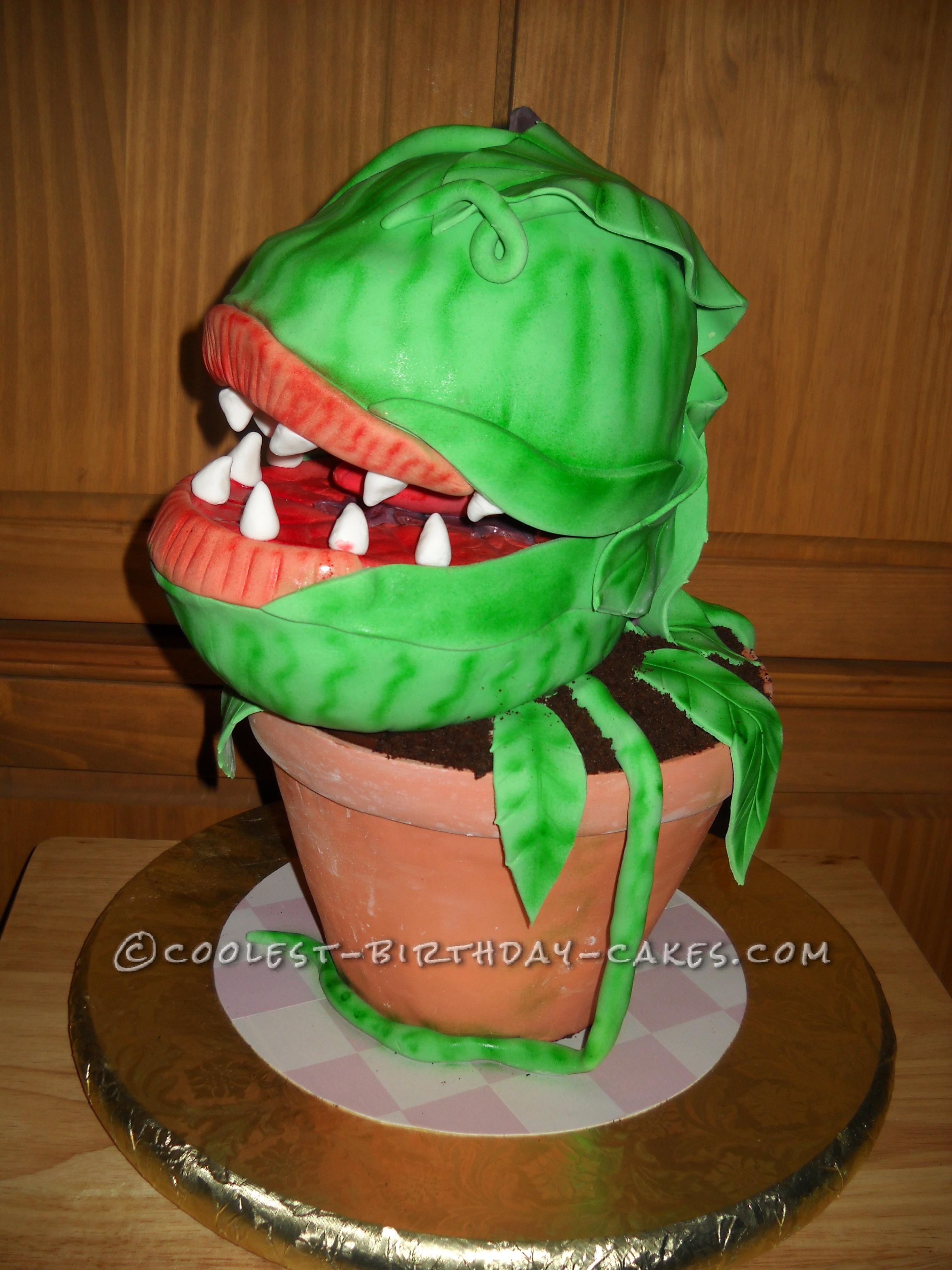 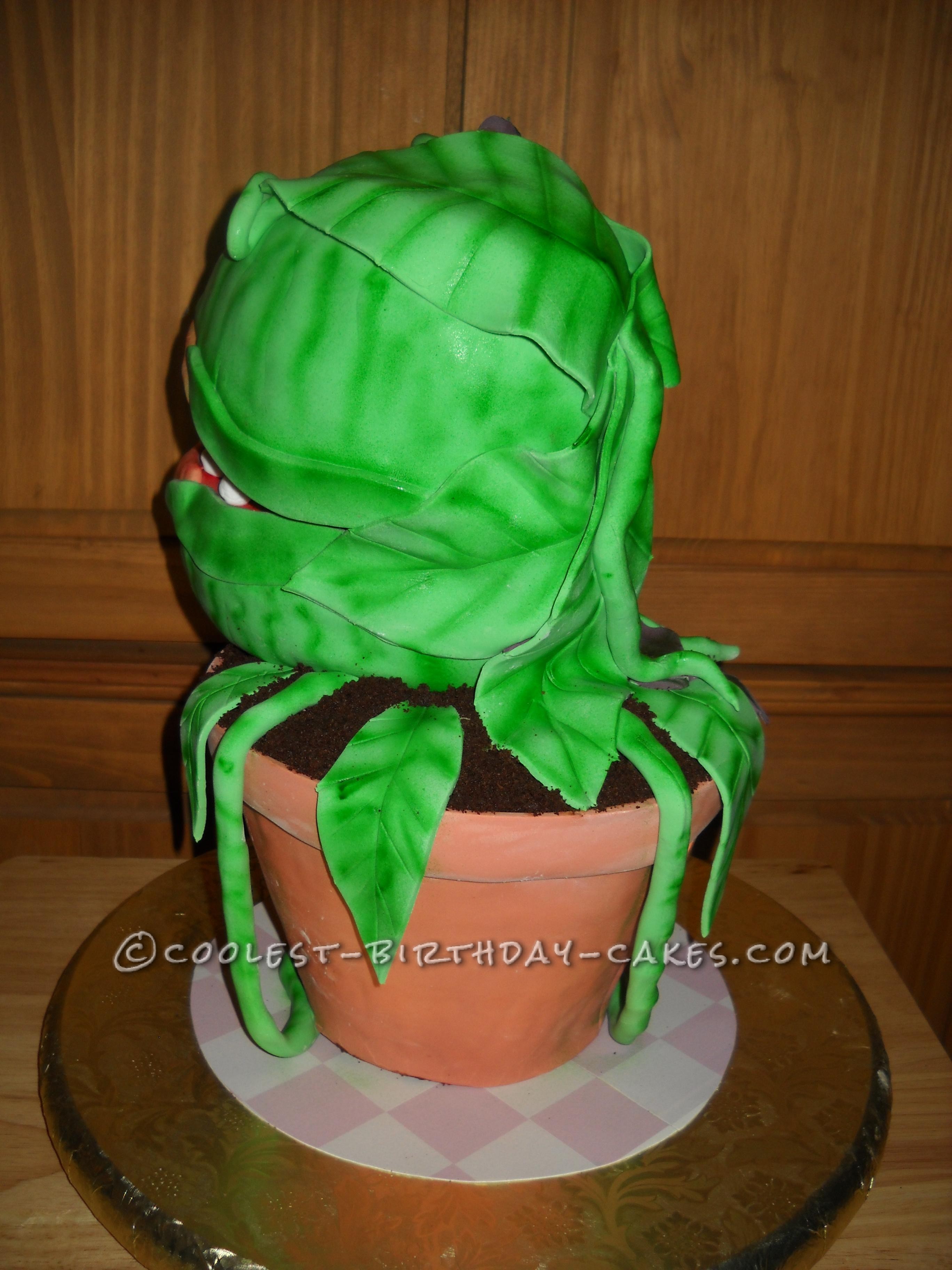 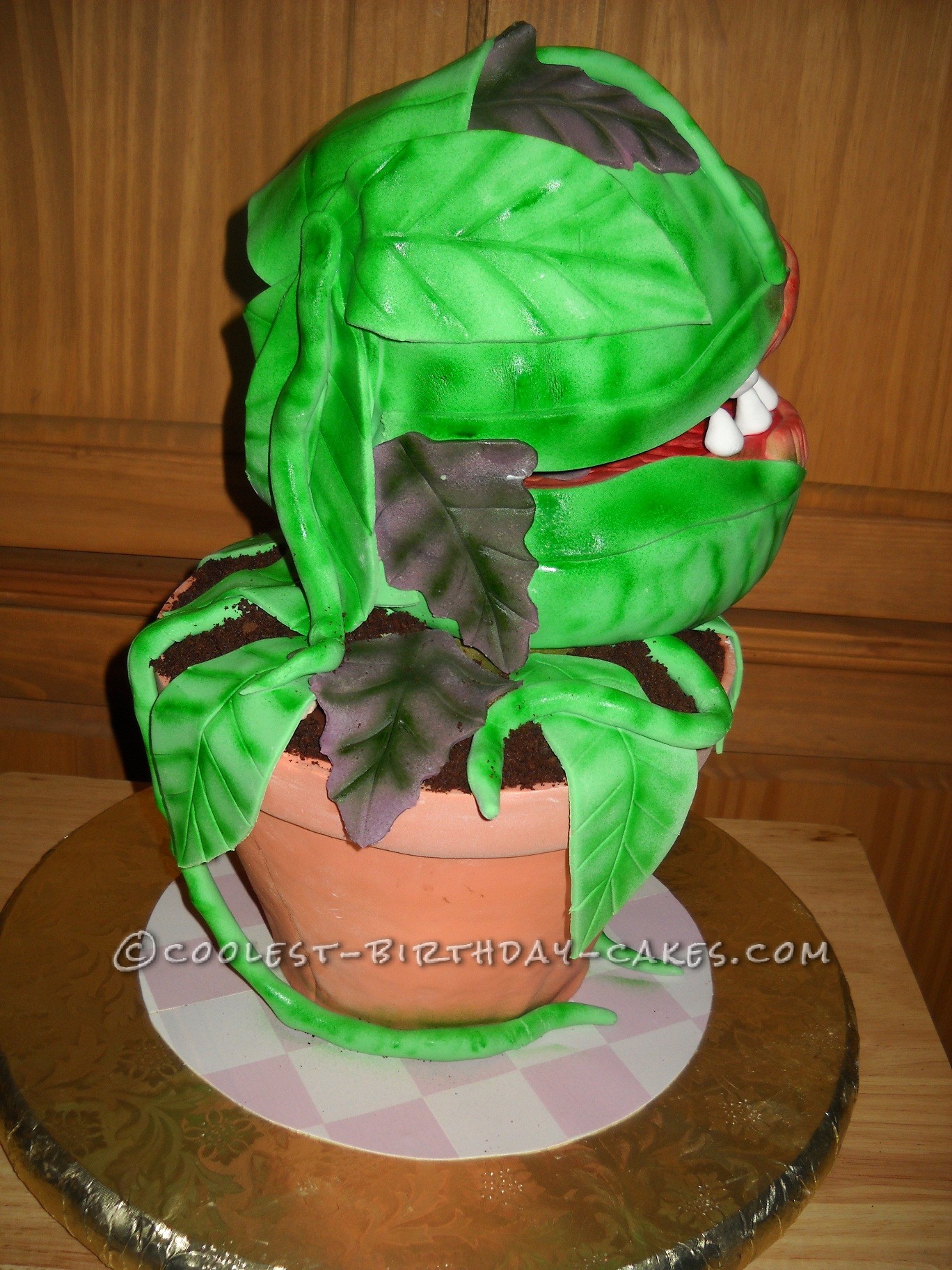 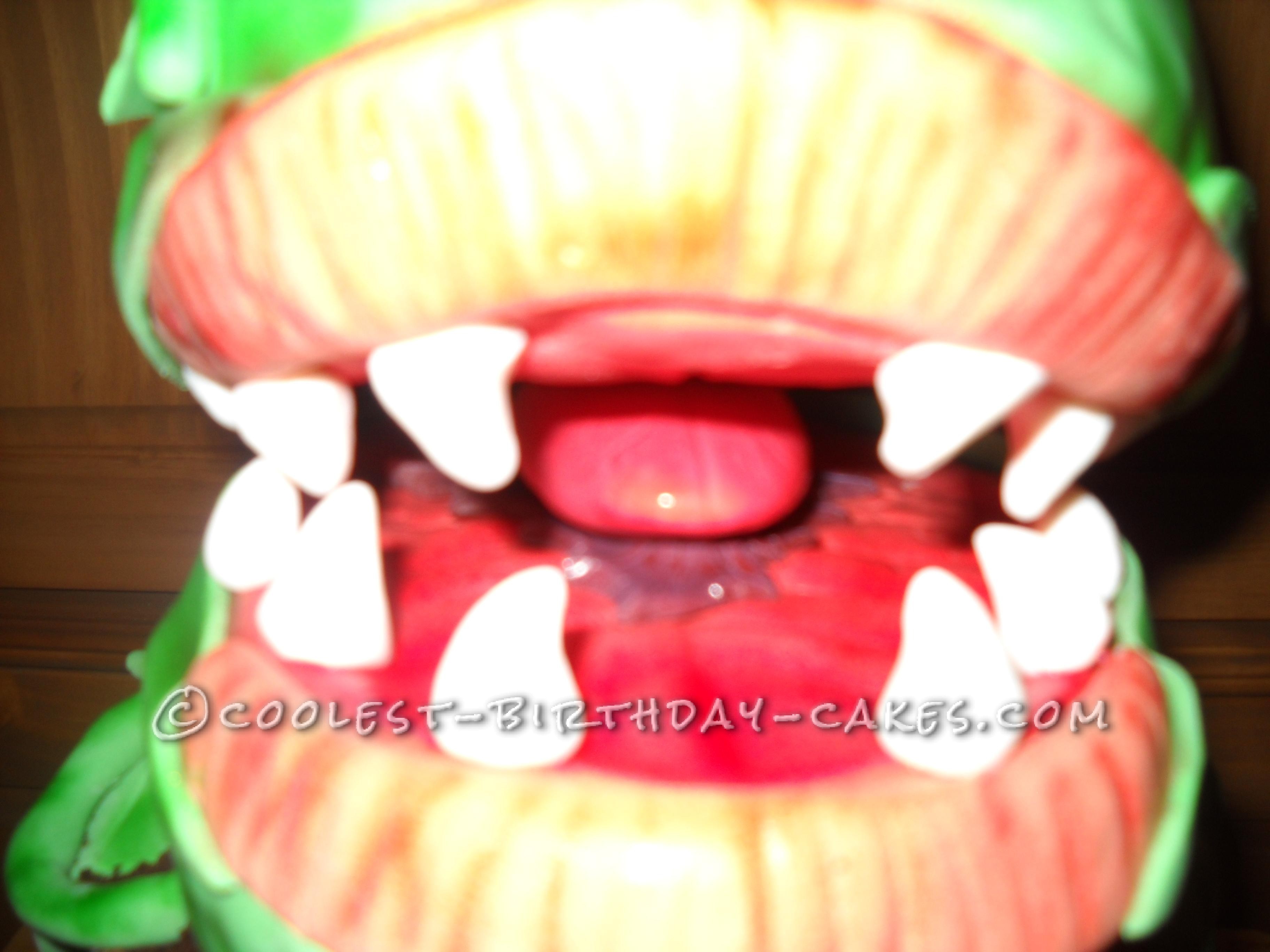