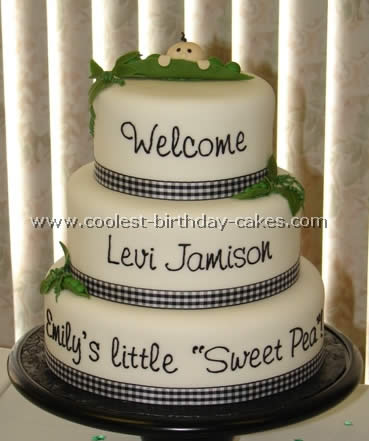 A friend asked me to do a baby birthday cake for her daughter’s baby shower that would match the Sweet Pea theme. She wanted something dramatic and not the usual sheet cake. This is what I came up with. It is a 10″ 8″ and 6″ stacked cake covered in white fondant. A few days ahead of time I made the baby in the pea pod and the other pea pod accents as well as leaves also using the fondant I had tinted to the color I wanted. Using a font that I liked and my computer I printed out the wording to the size I wanted on plain computer paper.

After placing the fondant on the layers, I placed the paper with the wording where I wanted it and held it in place with two stick pins. I then used another pin to poke small holes along the letters. When you remove the paper you then have a pattern to trace for each letter. I used black buttercream icing and a #1 tip to outline the wording. Then I assembled the cake once I had it at the location of the baby shower.

I just simply stacked the cakes then attached a black and white ribbon for the border of each cake. Next, I used long pins with white pearl tops to secure the ribbon to the back of the cake. Then I attached the pea pod accents and the leaves with buttercream icing tinted green. I used a #2 tip to make the curly vines. I did the same thing for the top. Everyone loved it and didn’t want to cut it!

After all that hard work they made me cut and serve the cake! It was beautiful baby birthday cake and delicious! 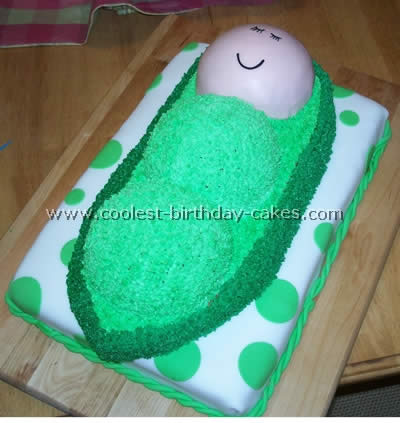 I volunteered to make this cake for my sister-n-law’s baby shower. Really wanted to use my Wilton ball pan and racked my brain and the internet for a baby birthday cake with the sphere shapes. I saw the idea for a pea pod cake using cup cakes so I thought I would just use that idea on a bigger scale. This is easy (only the second cake I have ever made).

It is two big sheet cakes (one on the bottom covered with white fondant and green fondant circles). The second sheet cake I cut into the shape of the pod using a wax paper template I made earlier. I piped dark green butter cream onto the pod so it looked like it had texture.

Then for the peas I just used my Wilton ball pan and made three spheres. I covered one with peach colored fondant (which I bought pre made) and the others I piped with a lighter green butter cream.

The last step was to finish the edge of the cake. This was the first time I had used fondant (not nearly as scary as I had thought) but I did not do such a great job trimming it evenly on the edge. So I just rolled long pieces of fondant and twisted them together then wrapped them around the edge of the cake. It hid all of the mistakes I made when trimming the fondant. The cake was the hit of the shower! 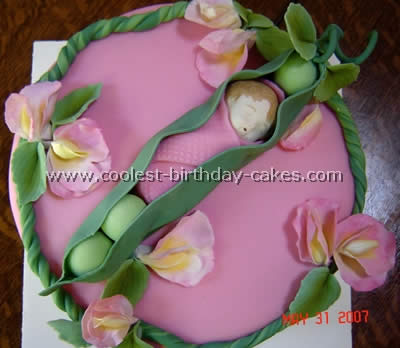 I’ve always wanted to do a baby birthday cake. In addition to wanting to try my hand at gum paste so how nice it was when I was able to do both at once! The cake is three 9″ rounds cut, filled and frosted. Then, they’re covered with pink MMF (marshmallow fondant – very easy, tastes great and covers nicely – here’s the recipe…). “Congratulations” is embossed into the fondant before it dried.

The vines are simply marbleized green fondant in a rope twist. The sweet peas are made of white gum paste allowed to dry. Then my wonderful husband carefully airbrushed them with pink food coloring. The baby is flesh toned gum paste (made from a fimo clay cherub mold I made). The hair, eyelashes and eyebrows are painted on with food coloring. 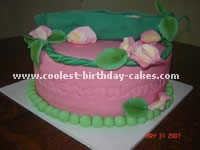 Once I painted the baby, I used a lump of fondant to form a little body, rolled out some pink fondant, cut a rectangle and impressed a quilted pattern on it then wrapped it around the body and head of the baby.

After cutting out a large rectangle of green gum paste I placed the baby in the center and three green gum paste “peas” on either side then folded the “pod” of the pea up and around the baby and peas. Once I’d joined the edges I trimmed off the excess to allow the pea pod form to the baby and peas inside. Once all the “details” were made it was a matter of placing them on the top of the cake and “voila!” a “Sweet Pea” shower cake!

I hope these baby birthday cake tips have helped you!

Take a look at more of the coolest Baby cake ideas…