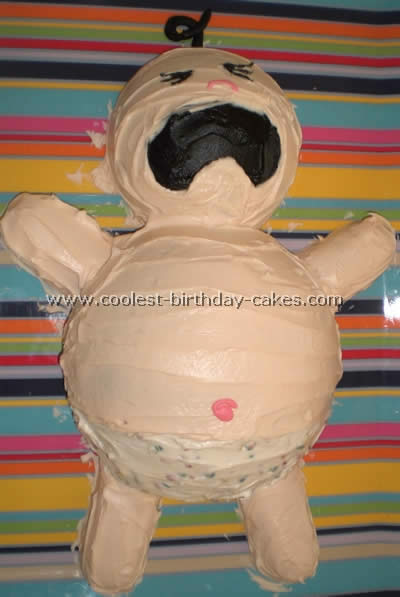 When my best friend came home for a baby shower I immediately knew I had to make a baby shower cake for her. I used the Betty Crocker Bake ‘n’ Fill dome shaped cake pans for both the body and head of the baby and Twinkies cut to size for the arms and legs. I used plain white frosting for the flesh color of the baby (a few drops of red to make it pink and added yellow to get it to be peach). I used Rainbow Chip frosting (her favorite) for the diaper and black icing for the hair eyes and mouth; pink for the belly button. The best part about the cake pans is that you can make an ice cream cake fruit filled or just mix and match flavors of cake. She chose a marble cake and Rainbow Chip cake which left me with enough left over cake mix to make a double layered 9″ round cake as well.

The second cake was perfect to write a message on. I had a lot of fun doing the cakes and was very pleased with the way the baby turned out.

The first baby shower cake was made for a friend. It was very simple to make. I based it on an 8″ round sponge cake and simply lay it down one next to the other. Then I colored some white icing pink and covered both cakes. The ears, arms, feet and toes were made from the left over icing. I placed some white icing on half of the bottom cake and marked two lines for the nappy and made a belly button. The arms and other parts were then added along with his face!

The bootees were a second baby shower cake and were a little tricky at first. I baked a 10′ square cake and cut and shaped the bootees from there. They were covered in self mixed blue icing and imprinted with a teddy on the front of each. For the ankle cuff I cut a piece of icing and shaped the edge then I cut out the hearts. I got the two ends and stuck them together and sat them on the bootees with edible glue. I used blue ribbon for decoration and with the cut out hearts glued them to the cake board.

This was a baby shower cake I did last year for a baby shower at my mom’s job. Since the shower was being given for a man I had to think long and hard about this cake because most shower cakes are really feminine. Since he was going to be a new dad I decided to try my hand at sculpting fondant.

I made the body by forming a block then covering it with a thin layer of rolled fondant that I shaped around it for the shirt. The legs are a block that I cut part the way up to make the legs. Then I rounded out the legs. The shoes were shaped from a teardrop. The arms and hands were paddle shapes that I cut the fingers into and rounded out. The head is a ball with a thin layer of fondant for the hair. I used a toothpick to put texture in the hair and to mark eyes and a mouth. The eyes and mouth were added with buttercream icing.

The color is paste icing color mixed in water and painted on. I attached the head, arms and legs with toothpicks. I did the colors in blue and pink since they didn’t know the sex of the baby. I sprinkled edible glitter on it to give it some sparkle. The dad took the guy on the cake home to show his wife. He really appreciated the fact that I tried to keep the baby shower cake from being too girly.

My friend was getting ready for her baby shower. I told her that I would make her a baby shower cake. She had no idea what I was planning on doing for her. I just asked her about her theme and she gave me a plate.

I then took the plate and decided to design the cake similar to it so that it would fit into her theme. Well it turned out great. Although this is the practice one, I do believe that the real one will be better…. Practice Makes Perfect!

This is a cake made for a baby shower.

The hood is gum tex you can get this at your local craft store in the cake decorating section; you must let it dry overnight over a ball or bowl. The baby is fondant.

The blanket is painted on with watered down food coloring gels.

The ruffles are buttercream.

Cake by Valerie I., Seymour, CT

I was looking at many websites for baby cake ideas and tweaked my own. All I did was make your typical cake mix and had two 9-inch layers. I used one layer for the head and one for the body.

Then I used a little bit of brown icing mixed into white frosting for the skin tone. I had fun decorating with what I had on hand around the house (ribbons, etc.). I also bought a frozen pound cake and carved out the feet and arms and placed them on top! I used flattened starbursts for the cheeks and cut them into circles.

I had so much fun with this baby shower cake!

I got this baby shower cake idea from the Wilton Decorating Year book. I made a 9″ round cake, one mini sports ball cake, and a 7”x9″ rectangular cake.

The face is the round cake. I cut out the hat shape from the rectangular cake and put the mini ball on top of the hat (secure it with a toothpick). Ice the cakes according to color preference. The names are cut out from fondant icing.

For this baby shower cake, I used half of the Wilton Sports ball pan, one 9-inch round, and 24 cupcakes.

I lightly iced the 9-inch round and the half-ball in butter cream. I then covered the half-ball in flesh-tone fondant, adding black fondant eyes and mouth. Using pink butter cream and a large petal tip, I added the ruffled bonnet and ties; then finished off the cake by piping pink and white basket weave on the sides of the 9″ round.

For the cupcakes, I simply iced them smooth with flesh-tone butter cream, added black butter cream eyes and mouth, and finished with the ruffled pink butter cream bonnet. Hope I helped someone with my baby shower cake ideas!

Cake by Carrie A., Dothan, AL

This baby shower cake was very easy to make and very adorable. I just used 2 different round cake pans to make the body (depending on how many people you need to feed) and just filled it in. I added the monogram of the baby for that extra special touch!