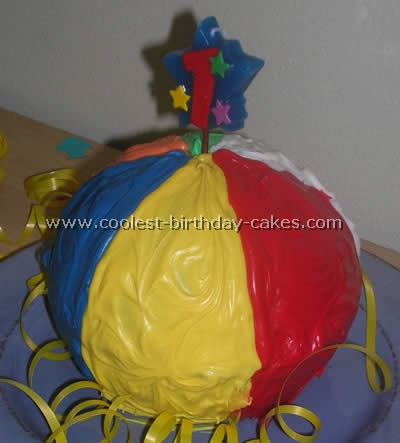 I made this beach ball cake for my son’s first birthday. I used the Wilton Sports Ball pan. It took one boxed cake mix which I altered the recipe by using four eggs and one small box of pudding. I cut off one end so it could sit steady. I put frosting in the middle then added the other half of the cake.

I put pieces of parchment paper gently under the ball cake so I would not get frosting on the plate. I used about two and half tubs of pre made frosting. I tinted about 1/3 cup of frosting the six colors of the beach ball. I scored the cake so I could see the sections clearly. I frosted one section at a time. I piped frosting on then used my fingers to smooth each section. I added a candle on the very top.

My son’s birthday is in July and I wanted to have a summer themed party – so a beach ball cake seemed perfect. I bought the Wilton Ball cake pan, baked that and then baked 1 9-inch square cake.

I then spread white buttercream all over the ball to make a smooth canvas for the rest of the decorations. I then traced the intended sections of the ball in the frosting and then frosted a black line to designate the sections.

Then using a star tip started filling in the sections. I piped my son’s name in the center and finished the cake with green grass piped around the ball and the edges of the square cake.

For my son’s 1st birthday I wanted to make a beach ball cake to reflect his favorite toy: balls! Using two hemisphere molds I frosted them together, and then lightly frosted the whole thing white. I then used black gel icing to create the lines, and filled in each block with hand colored frosting. It was a bit odd to cut, but my son, and all his little friends, loved it.

Our family went on a summer holiday and took our youngest son to the beach for the first time. He had such a great time that we decided to have his first birthday party as a beach theme.

I had so much fun making the ball cake! I found a round cake pan that was for a bowling ball. The cake was so easy to make and looked so cute! And the rubber duckies and umbrellas just seemed to fit in perfectly!