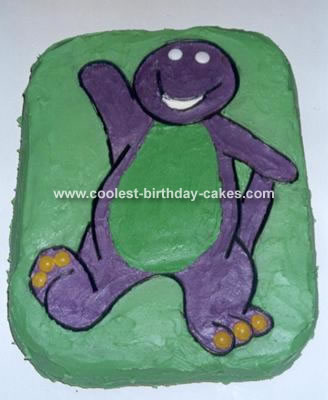 My daughter was crazy about Barney so I decided to make her a Barney the Dinosaur cake for her 3rd birthday. I used 2 boxes of Moist Orange Cake Packet Mix and made a large rectangle cake in the roasting pan.

For the Barney shape I enlarged a picture out of one of her story books and copied it onto the cake using a toothpick to outline my shape. I made up 2 quantities of buttercream icing as per the recipe in the Australian Womens Weekly cake book. Then I split it up and coloured it purple and green, and a tiny little bit I left white.

I iced Barney in purple and green icing and used licorice straps which I cut thinly to outline him in black. For his yellow toenails I cut jellybeans in half. For Barney’s eyes I used 2 white M & M’s and white icing for his mouth – this I had a bit of trouble with in such a small space and it ended up getting a bit smudged.

As this was my first attempt at icing a picture on a bigger cake I found it very time consuming, but I was pleased with the end product and my daughter and her friends loved it.

The one thing I did wrong was I should have had the green coloured icing on the outside of the cake a much lighter shade than what it was, but I was still pleased with the end result.

1 thought on “Barney the Dinosaur Cake”