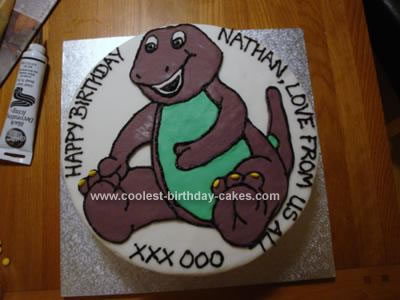 This Barney cake was a group effort for my son`s second birthday on 19th October 2009. He loves Barney and we decided that we were going to give it our best shot.

We baked a large chocolate cake in two rounds and sandwiched them together with apricot jam. We then iced the cake with a thin layer of lovely Ballymaloe chocolate icing. Without a light background, Barney would not stand out so well so we decided to roll out white icing to cover the cake and then cut out all the coloured shapes as a jigsaw-type stencil.

It was really tricky to get the outlines traced through baking parchment and, once cut, the icing stretched out of shape very easily, making it difficult to line the picture up. We eventually got everything lined up and then piped black icing, through a fine nozzle, as the main outline.

The toenails were yellow Smarties, cut in half with the same craft knife we used to cut the outlines of coloured icing.

We were happy with the way it turned out and really thought it was worth the two and a half hours of icing! This was the first cake of its kind that we had ever attempted and we were really happy with the outcome. I look forward to all the other cake challenges for our two sons and would like to say a special thanks to Brennans Cookshop, Co. Cork, Ireland. We asked them loads of questions and must have been a real pain, sorry !