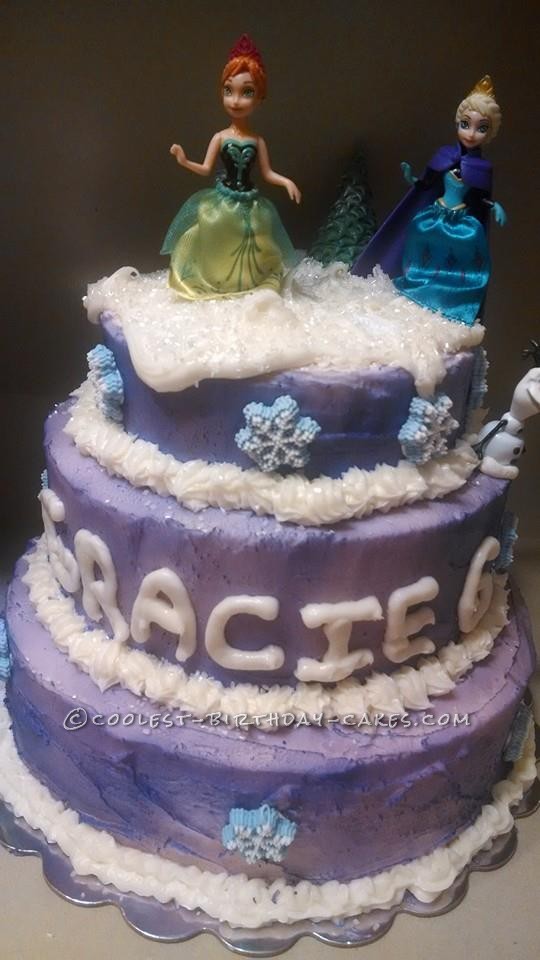 I am very new to cake decorating.  I have not taken any classes.  This was my first tiered cake for pay.  I was asked to make this cake by a lady at my church for her daughter who was turning 6.  She sent me a beautiful picture of a blue 3 tiered cake covered in snow and snowflakes.  On top of the cake were some figurines that looked like the main characters in Frozen.   She told me her daughters favorite color was purple so I decided to make it purple instead of blue.  While I was at the store looking for supplies to make it I saw a cake mix for a purple and white zebra cake.  I had made this kind before so I decided to make the top tier purple zebra stripes.  The order was for white cake so I just added a little purple food color gel to make it purple.  I had also found some purple spray paint for cakes.  I had never used this so I decided to try it. The cake was made with a 10” bottom tier, an 8” middle, and a top tier that was 6”.  I used dowel rods to help support the top two layers.  Each tier was two layers of cake with buttercream icing in between the layers.  I baked the cakes 3 days early and froze them.  I did not want to have a cake fall apart on the day of decorating and delivering.  I started decorating the morning before the cake was to be picked up.  I started with the top tier since it was the smallest.  I frosted and smoothed and frosted and smoothed some more.  I didn’t think I would ever get it even.  By the time I got to the bottom tier I felt like a pro!  Once it was all covered in buttercream and was smooth and even I started to assemble it.  I had no way to cut the dowel rods so my husband used his pocket knife.  They were a little rough on the ends after that.  I used some fine sandpaper and they were good as new.  When it was all assembled I set it on my spinning stand and started with the spray painting while turning slowly.  I had purple all over my kitchen table at this point.  Once the cake was sprayed all over I cleaned up the overspray.  Then the hard part.  I had to pipe a border around each layer.  I have very shaky hands so this took a while.  Then came the fun part.  Making a snowy mountain on the top layer.  I pile white buttercream on top and just let it kind of “melt” over the edge.  Then I used some sparkling sugar over that to make it glitter.  The figurines were supplied by the mom so I started putting them on.  I decided it needed some evergreen trees.  My niece was home from college so she shaped some green fondant into some very cute little trees for me.  I used a little silver spray on the trees and snow.  I found some snowflakes made from sugar at the store so I used those instead of trying to make some.   Then I added the child’s name and age on the side of the middle tier.  I got a message from the mom later thanking me for the cake and said that her daughter loved the “surprise” inside the top layer.  I had a blast making this and look forward to making more in the future. 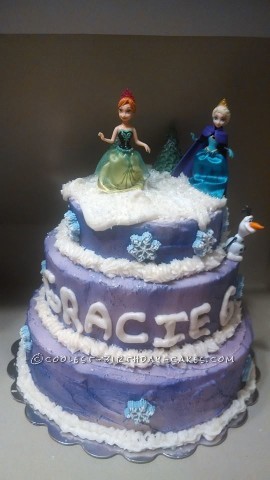 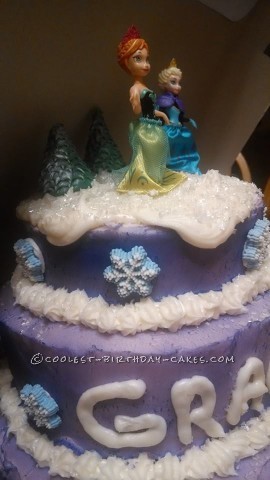 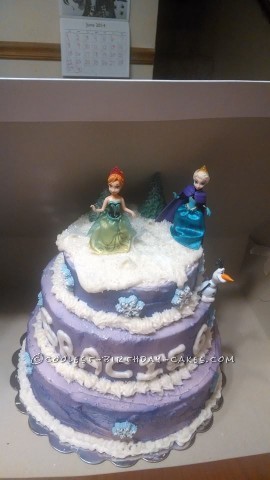 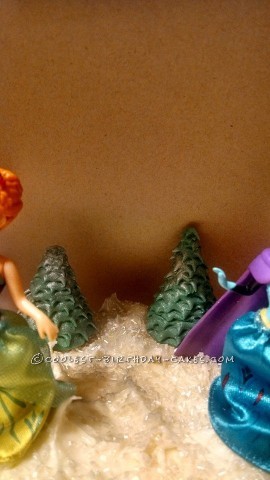 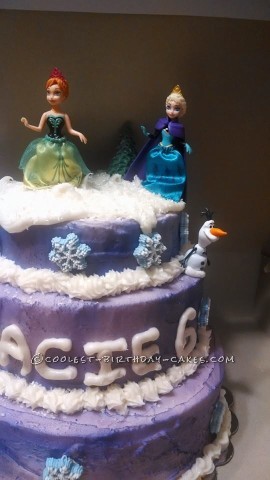 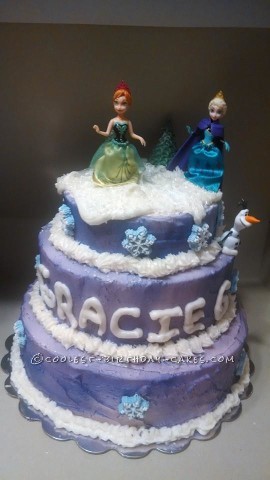