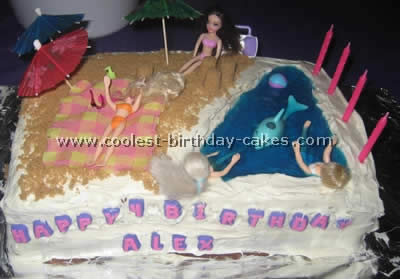 I made two 9×13 cakes and two cans of prepared frosting for this beach cake. After the cake cooled on the top layer I cut an area out for the beach. I did a crumb coat. Then another coat after that was set. I did cut a little to close to the edge and it started to collapse but toothpicks secured it. Make sure the beach part is well frosted so the jello won’t seep through the cake.

I made the jello the quick set method. I let it set in a bowl in fridge for 10 minutes then I poured it into the beach. My daughter had a blast putting all her Polly Pocket toys etc. in. we used brown sugar for the sand/sandcastles. It was very easy to make and I have to thank Coolest-birthday-Cakes.com for this wonderful website and all those who entered their cakes to give me the idea. It made my daughter’s fourth birthday fabulous!

The basic cake here is a 9 x 13 sheet cake which I made into a beach cake. A day ahead of time, I made the dolphin, turtle, and fish out of gum paste. I let them dry overnight so they would hold their shape better. I also made the palm trees using candy melts. I had a mold for the trees, but had to add sucker sticks on the back afterwards to help hold them upright in the cake. I placed the fish and turtle on the cake at one end, and then covered them with piping gel tinted with aqua paste coloring. I put the dolphin on to look as if it were jumping out of the water.

For the sand, I used brown sugar. The sand castle is just brown sugar which was packed into decorating tips and couplers to achieve the right shape. I formed the rest of the figures out of fondant, and used edible markers for the faces. Last, I piped the lettering in piping gel, and put borders in buttercream icing around the top and bottom edges of the cake.

After looking through your site for ideas for a beach cake I decided on a beach theme for my daughter Alexa’s 8th Birthday. We had recently watched “Jaws” on TV and she had really liked the movie. So I dug through her enormous “Polly Pocket” collection and found two girls and a boy plus a beach chair to add to the cake. I also found a plastic shark among my son’s toys.

I baked one box cake mix (chocolate) in a rectangle pan. After it cooled I frosted the whole thing with homemade buttercream frosting and cooled it in the fridge. Then I added another layer of white icing on one side and covered it in crushed Nila wafers for sand. The other side was done with icing tinted bright blue and made to look like waves.

I added two of the “Polly Pockets” on the shore (one sunbathing under a paper umbrella and the other yelling “shark”). The last “Polly Pocket” was put in the “ocean” swimming from the shark. I used silver balls to make “Happy Birthday Alexa” in the ocean (hard to see in photo).

My daughter and her cousins loved this beach cake!

This was a beach cake idea that I got from the cover of a magazine. We had a pool party for my daughter when she turned two so this was perfect! The cake itself is an eight-inch two layer cake. I then “dug” out the pool on the top and filled it with blue jello to set.

Later I iced the cake and pressed graham cracker crumbs on for the sand. The bears are teddy grahams, the inner tubes are gummy savers and the shaped colored pieces are Airheads used similar to clay (they “form” similar to fondant only they taste so much better!) The slide is a fruit roll-up. The umbrellas and palm trees were purchased at a party store.

I usually make birthday cakes for the grandchildren as a two layer with normal cake decorations. My roses are a big hit. I think they believe I can do anything with icing but the only thing I’d ever done is rose’s borders etc. This year my five year soon-to-be six year old granddaughter and her brother, eight, requested a beach cake “with surfers and everything”. I said that I could only do roses and their faces fell.

I got out the cake stuff yesterday and I started thinking how I could maybe do a beach cake. My daughter-in-law went to a party store looking for tiny palm trees etc. but everything was normal sized. I was about to give up when I remembered the Internet. Thank goodness for the internet. I found this website and the rest is history. It’s not original thinking, I copied everything from the talented other cake makers.

I used a 9×13 chocolate cake. I iced with white icing reserving about a third for the ocean. That I colored blue. I swirled the blue icing to look like waves and I put one larger wave in front for the surfers and another smaller one behind it. Carefree gum cut into shape is the surfboard. I used the Teddy grahams. I painted bathing suits on them with a new item from the grocery, little tubes in a box that are for “painting”. I used gummy Lifesavers for the inner tubes. You have to cut a hole in the middle and push the teddies down firmly.

For the teddies lying on top I used a dab of icing so they won’t fall off. The beach is crushed teddies. The palm trees are pretzels with cut-up Fruit by the Foot. It sticks well to the top of the pretzels without anything else. The beach towels are Laughy Taffy and I rolled them out a little flatter than they were with a rolling pin. I put icing beneath the sunning teddies to stick them to the towels. The other teddies standing up I just stuck into the icing. The ones on the surfboards I used icing to stick them upright.

On the sides of the beach cake, I cut the Fruit by the Foot into irregular pieces and stuck them into the icing for seaweed. I should have bought goldfish too. They would have been fun in the seaweed. There was no room for the “Happy Birthday” message so I put a piece of parchment paper in front of the cake and wrote on that. I think that’s it.

P.S. I made goodie bags out of all the candy that was left over.

I planned a beach themed birthday party and thought this beach cake would be perfect. First I prepared a round cake following the directions of whichever cake flavor you choose. After the cake is cooled I cut a jelly bean shaped hole on one half of the cake through the first layer of cake. I frosted the outside of the cake with cream cheese frosting and the inside of the whole with Caribbean blue cream cheese frosting.

I prepared blue jell-0 and filled the hole. After the beach cake cooled in the fridge I used the extra cake, grounded up to make the sand, made white chocolate seashells with a seashell kit and used Swedish fish, Dora cookies with soft lifesavers for floaters, striped chewing gum for towels, layered frosting of different colors to make plant life and sprinkles to decorate. When making the seashells put in a small amount of Wiltons food coloring to make them unique.