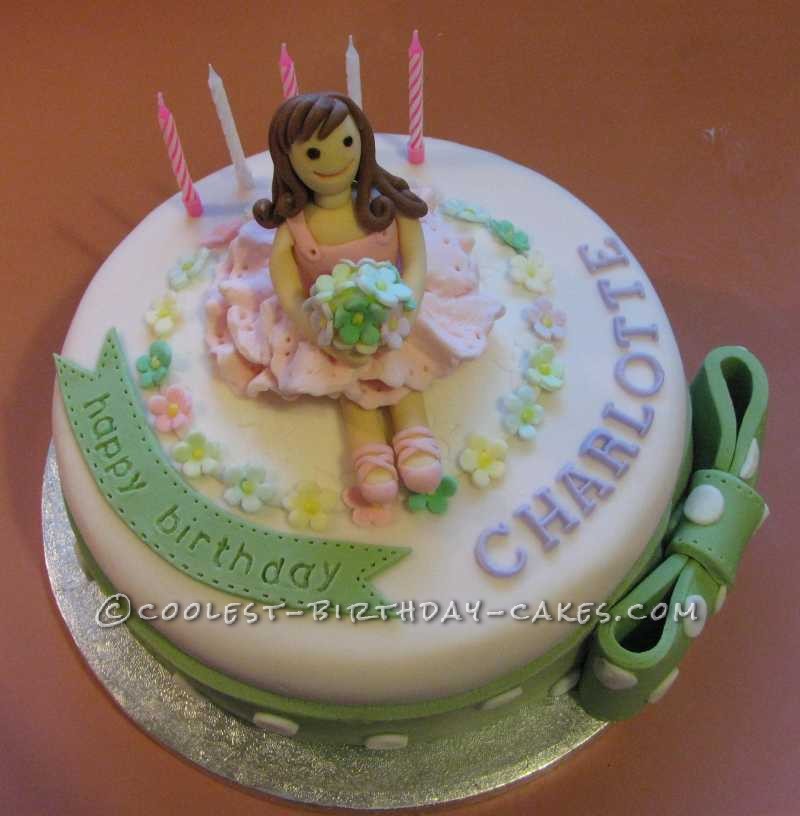 For my daughter’s 5th birthday, she asked for a ballerina cake. I’m not the best at envisaging a wonderful creation in my head so I used CakeGirl from Flickr’s cake (not sure if hers was the original, I think so though). Mine is a little different.

I made 2 moist chocolate crazy cakes (this recipe is by Shirley Corriher and is available online). It’s a good sturdy cake for holding fondant and is rich and delicious and dark. I sandwiched them together with mocha butter cream. This is my best recipe for cakes, people always comment how nice it is.

I made the ballerina cake 2 days before the party but found it very stressful (there was much cursing and even tears)! My advice is to do the figurine in advance. I just googled to find advice on making the ruffles for the skirt. I found this tricky as the icing dries out quickly in our summers and started to crack. I used a large scalloped edge cookie cutter, used a knife to cut a hole in the center (for the body) and a slice to be able to place it around the ballerina. I just ruffled it as I went and added more pieces to the skirt if needed and added layers.

I used the end of a tiny paint brush to make lacy holes. Her bouquet is just a ball of marzipan with flowers stuck on. To make my fondant stick, I use a glue of hot water with sugar (dissolved) and this works well to stick things on. She’s sitting on a round pad of white fondant that I used a flower cutter to gently press part way in to the icing with to make a pattern.  When covering the cake, Google a tutorial, there are lots of quick ways to do this.

I cut the happy birthday banner out of fondant with a knife and used the tip of it to make the indentations. I used a stamp for the lettering; I found this tricky though as the icing kept sticking. I went back over the words with a butter knife to neaten it up a bit. The name was just done with those rulers you get at cake stores that you press down in to the icing. That was tricky too as the letters stuck to it were very hard to remove (honestly, this cake nearly broke me, lol).

The ribbon on the ballerina cake is pretty easy to copy, however with the bow, I’d suggest making it in advance too. I rolled the fondant in the bow shape and pinched in the center and placed rolled up kitchen paper towels in between to hold the loop open. Make-Fabulous-Cakes have a good tutorial. The bow has no tails. Leaving the fondant thick helps for it stay in shape. I used a toothpick to hold the bow on, poked in to the cake and also the glue I mentioned above.

A friend told me that she said to my daughter “gosh your Mummy is clever” and my daughter responded with “I know! I LOVE her!” We have lots of photos of her amazed face. I think this was the best loved cake I’ve ever done for her.

Her party was a “B” party, she had a lovely ballet costume. Other friends came as butterflies, batman, bears, black beard pirate, bride, blue people, builders and birthday cakes!