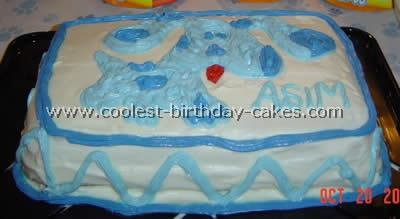 My son loves Blues Clues so for his third birthday I decided to make a Blues Clues cake by myself. I used French vanilla cake mix and instead of typical buttercream frosting I used whipped heavy cream. Because of real cream it was light and yummy and equally difficult to decorate.

I used a Blues template to trace it on the cake with a toothpick. I used a basic Wiltons cake decorating kit and used a Wiltons ready to use icing for cake decoration. This Wiltons kit has blue color too so I used two different shades of blue, light and dark. For decoration I used Blues Clues napkins.

I made two round 10″ cakes. I printed a template of Blue’s Clues on DLTK’s but actually used it to draw a larger one. I cut out a face birthday hat, two ears, Mr. Salt and Mrs. Pepper all out of the two round cakes. I assembled it on the cake board and then iced it.

I used cream cheese icing because it was a carrot cake but buttercream would be much easier because cream cheese melts and I had to refrigerate every couple of minutes!

I made the paw print by pouring my left over cake batter in a pan and using cookie cutters to cut it out. I recommend freezing it first. I was in a hurry and didn’t get to freeze the cake so I had cake crumbs in the white icing.

This was my first cake I made using the star tip all over. It is incredibly easy and only took about two hours.

I actually got this Blues Clues idea from a friend. She had a template for this one but I no longer have it. You could download a simple coloring book photo and enlarge it if necessary. Bake two large rectangle cakes, cut the face from one and two ears from the other. Attach ears with icing; you’ll need about six cups of icing, blue food coloring and two large M&M’s for pupils. Leave a little white icing for eyes and writing.

Cut a small triangle out at bottom of face for mouth but don’t cut off completely leaving half inch thickness. Make blue icing leaving room for darkening for spots. The first Blues Clues cake actually ended up on the floor this is number two. This is an easier cake to make if you refrigerate when icing starts to get runny.

Like last year I also made a lazy cake. I molded it into a rectangle because I needed to feed 50 people. I refrigerated the cake overnight. I then covered with sugar paste and decorated it with icing sugar and used a template to draw blues clues.

I used food coloring to make the color red present and a pink hat. I used templates for the stars and used the remaining sugar paste to make paw prints. The party was a big success and everyone loved the cake!

I baked a couple of Rainbow bit boxed cakes in a large rectangular pan. Let it cool completely. Then I searched the net for a cut out shape of blues clues cakes and put it on the cake with toothpicks then cut the shape out. I set it up exactly how I wanted it and froze the cake to make it easier to ice.

Then I made butter cream icing colored with Wilton’s colors and used a star tip to cover the cake after we did a skim coat with icing.

The problem with butter cream icing using real butter and not Crisco is that it gets warm and needs to be cooled every so often.

For the eyes we bought googly ones from Michaels and stuck them on. The kids love the blues clues cake but it was a bit of a pain with the blue icing… it stained their mouths and hands and for the adults wasn’t very becoming but everyone enjoyed it. Next time I would try to mix the blue with a bit of a base color perhaps so we don’t have to use too much color. It certainly was fun to make!

This blues clues cake was a request from my nephew Javin. I found a template online (coloring book pages will do too) – printed it cut it out and laid it on a 9×11 cake. I used a toothpick to trace the outline in the white icing and then went over it with blue icing to create the outline.

I colored the remaining icing for all the different parts of blue. I used a large round tip to apply the icing and I “patted” it smooth with my finger (which I dipped repeatedly in cornstarch to prevent it from sticking to me). I put a plain shell border on the top and bottom of the cake and used a smaller round tip to make the “paw prints” on the sides of the cake.

Using white sugar paste icing, add blue food coloring and roll out. Cut out the shape of blues clues (the dog) and then decorate him using darker blue icing for spots on him, white for eyes, dye a bit red for tongue and a blue icing gel pen to outline him. Then place him on an iced cake.

This is my first Blues Clues pull out cake I did for my son’s 2nd birthday. The face and name is made of cupcakes and the icing is made from scratch of butter cream icing. You can get the recipe from wilton.com. After seeing so many different cakes I decided to go freehand on doing this and so here it is. I got the template of the head shape on nickjr.com. Enjoy hope you like it.

This is a cake of Blues Clues house. I made a sheet cake and a cake with a “house” pan. The house pan allows you to sit the cake upright. I sat the house upright on the cake and used coconut that I dyed green to create grass.

I made a lot of flowers out of royal icing a couple of days before to add flowers to bushes and flowers on either side of the sidewalk. Then I ordered character’s from Blue’s Clues to put on the grass.

I did my best to ice the house to look like Blues clues house. It wasn’t perfect but my daughter loved it. She watched me make it and got the biggest kick out of watching Mommy build Blue’s house.

I made this Blues Clues cake for my sons 1st birthday. I used a Wilton cake pan and the Wilton colors and butter cream icing. I used tip 16 to pipe stars in the cake.

I also made the small one for him to have his own cake. I used a small round cake pan and used tip #16 star to color in the cake then lined the sides of the cake. I bought the candle at a hobby store.

This cake was for my second grandson, Brandon, for his second birthday. We had a Blues Clues birthday theme with bone cookies iced with blue frosting, blue paws around the room, blue koolade goody bags with all blue things inside and we played a game where the kids hunted for bones and were able to choose prizes.

Later they all went outside to have a silly string fight, blue of course! The cake is a 14” round top cake pan. Great because you don’t have a top border and can decorate on the edges. I use two cake mixes for this size pan. I prefer Duncan Hines cake mixes and always sit the oven temperature at 315 degrees so that the cake center will rise flat and even with the sides. I also put wax paper back into the original pan cover very well and freeze the cakes. They are easier to frost if frozen.

I made paw prints out of colored fondant but could have just as easily filled in the paws with icing as Blues Clues was done. I enlarged a copy of the Blues Clues dog and traced on parchment or wax paper. After icing the cake white I gently laid the paper onto the cake and with a toothpick traced around it gently pulling it off when finished. I used a #5 round tip with blue icing that was thinned a little. Using a circular motion I filled in the light blue and then the darker blue features.

The eyes were white fondant but could use a larger round tip. The bottom border was a shell border using a medium size star tip and a blue dot using a #3 round tip was added between each one. The writing can be put directly onto the cake with a round tip. I don’t like my letter writing skills too much so I sometimes do the letters days before in royal icing. The recipe is in the Wilton book. When finished I glue a toothpick on the back of each one with royal icing and let dry. This will keep the letters out of the icing. I put them at an angle on the cake. I like the way they look standing away from the cake. The kids had a great time at the Blues Clues Club birthday party.