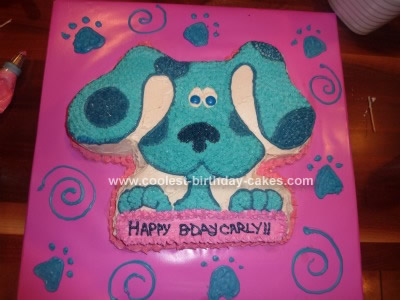 I found the Wilton Blues Clues cake pan and purchased it on eBay for this Blues Clues Cake Design. I also purchased a Wilton cake decorating kit for 9.99 at my local kitchen store. My daughter picked out Funfetti for the kind of cake she wanted so that is what I used (you can choose any kind, be aware that the lines from the pan are harder to see if you use chocolate or something dark.)

So first I made the batter and then greased the pan with vegetable shortening and also used the Easy Bake spray on top of that…came out of the pan perfectly. While it was cooling I took a 18″x18″ board I had and wrapped it with foil then pink wrapping paper for a nice background. Once the cake cooled I iced the whole thing with the buttercream icing recipe that comes with the pan and set in fridge overnight. The next day I made 3 different blues to use for the nose, body and dots on Blue as well as a pink for the birthday message.

I started by tracing the outlines of Blue, since I iced over everything I looked at the picture and did it by hand. Next I filled in the body with the turquoise like blue and traced the nose and filled that in as well. I then used white icing for the eyes and had bought Almond Joy Pieces candy and used two blue ones for the eyes. Next, I spread pink icing on bottom and edged it with stars and wrote my birthday message with the blue icing I did for the nose. Last I took the left over icing and went around the bottom of cake with the shell like tip.

At the end I decided to make little prints and swirls for an added effect with blue I had left over. This cake wasn’t too hard, it just took a lot of thought and time! It was all worth it when my 3 year old daughter saw it and said “Its beautiful!” Good Luck!

I also made cupcakes with blues clues prints on them. I just iced them and used a bottled icing to dab the paw and tips. I added sprinkles around edge too. They were both a hit at the bday party! 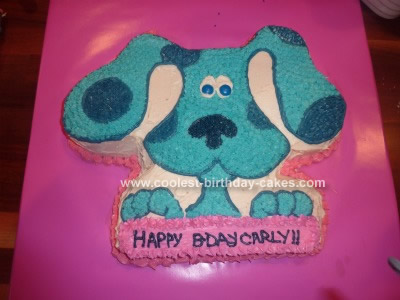