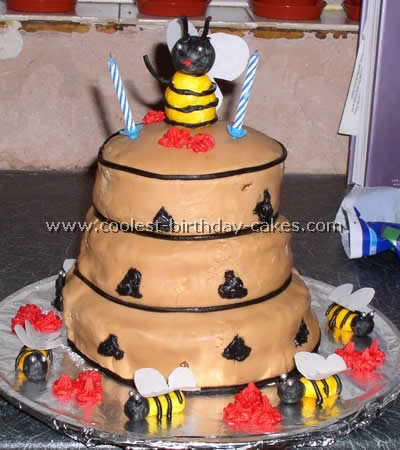 This Bumble Bee cake was so easy to do. I made three different sized Victoria sponge cakes, each just a couple of inches smaller than the first. I believe it was 8″, 6″ and 4″. I bought some teddy bear colored icing. I used black icing for the windows and liquorice shoe string to go round the cake. 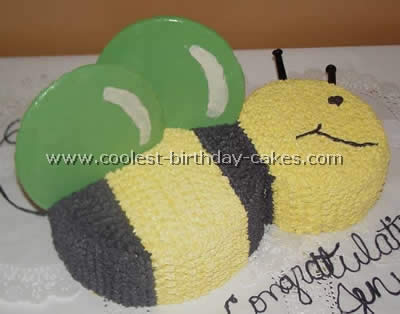 This bumble bee cake was actually made for a baby shower. It is made of two double layer round cakes (8” and 6”). Then I star tipped the entire thing (both cakes placed together) in yellow and then added the black striping. The antennae are licorice.

Cake by Emilee B., Waynesboro, PA 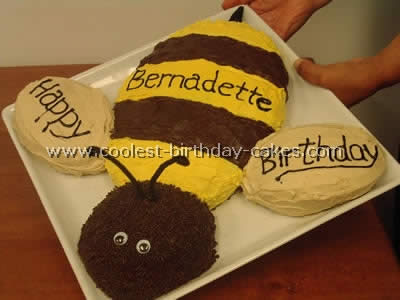 It was my co-workers birthday and she liked bumblebees so when it was her birthday I took the challenge and made a bumble bee cake! The body was made from a medium size oval baking dish and the wings were made from a small oval size baking dish.

The head was the small batter bowl from pampered chef. I drew out the strips and colored them in and poured chocolate sprinkles over the head for that fuzzy effect. The eyes are large wiggly eyes and the antennas are a pipe cleaner bent in half.

The neat thing about my cakes is they are made with different flavors for example the wings are chocolate cake with peanut butter icing, the head is yellow with chocolate icing and the body is chocolate with alternating white and chocolate icing. 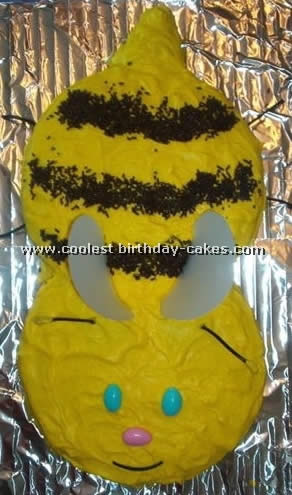 This bumble bee cake was for my daughter’s 1st birthday; I used two round cakes (strawberry flavored) and then cut a small section off one of the cakes so the two pieces fit together and used the cut piece (which I cut in half) for the stinger.

For decorating I made buttercream frosting and colored it with cake decorator food color (they had a bright yellow that was perfect) then added Jordan almonds for eyes and nose, black licorice for legs and antennas (I dipped the tips in a little frosting) and chocolate sprinkles for the stripes. I forgot about the wings so I looked around and used some vellum.

The bumble bee cake was a huge hit with the kids but the adults devoured the cake. It was fun and not stressful. “Aerodynamically the bumblebee shouldn’t be able to fly. But nobody ever told the bumblebee so it goes on flying anyway”. 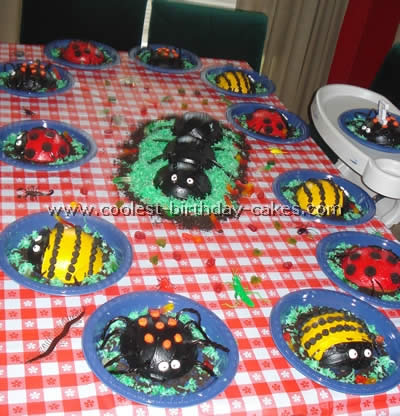 I did a bug party for my son’s first birthday. I used the Wilton ball pan. This was pretty easy to do and came out so cute. I made a little bug cake for each kid. (a ladybug, bumblebee and spiders, also an ant in the middle of the table for adults). I described the ant already on this website.

To make the bugs I used only one cup of cake batter, that way the cakes were smaller for the kids to manage. Let the cakes cool. Ice the cakes in the appropriate colors use mini Oreo’s for ladybug spots. At the last minute I decided to take marshmallows and cut them in half then coat them in the left over icing for the stripes on the bumblebee and the spots on the spider. I used black licorice for the antenna and legs marshmallow’s for eyes.

Then I surrounded them with coconut died green for grass and Oreo’s crushed for dirt. I also placed some gummy worms in the dirt.

I placed all of this in a red and white checkered table. It was very cute and inexpensive. 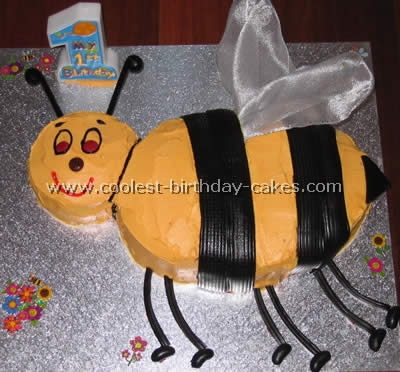 This bumble bee cake was my first attempt at a kid’s cake. I got the idea from my daughter’s book. I made a chocolate cake (double quantity) in a Swiss roll tin and cut the oval body shape from it with a pointed tail for the sting then from a corner section cut a circle for the head. I rounded off the edges with a bread knife.

I used a basic butter icing recipe and only needed one batch to ice the whole cake (although I made double – what a waste!). I colored the icing with yellow food colour. It took a whole little bottle to get good cover. I also made some into chocolate icing for the stripes. Here’s a tip – chocolate cake and yellow icing don’t mix well! I had a lot of trouble with choc crumbs contaminating the icing.

Licorice straps were used for the black stripes and sting and legs. Black jelly beans for the feet. I used gel icing tubes for the face. I found some bumble bee and flower stickers which I put on the cake board. Hope this helps. Everyone loved it. 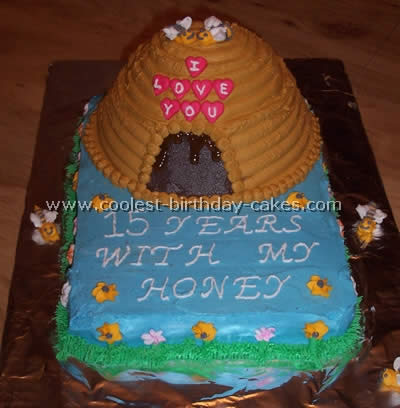 I wanted to make something special for my husband for our 15th anniversary (we have three kids and were in the process of buying a larger house so money was TIGHT). I looked through MANY cake books until I found this bumble bee cake(I did a lot of it my own way though).

I made the base cake and frosted it smooth. The beehive is made from the Wonder Mold doll cake pan by Wilton. I used this neat little scraper tool to get the lines on the beehive. I made the hearts, flowers and bees out of royal icing. I used yellow gel glaze for the dripping honey.

It was a lot of fun to make and the kids loved helping to make it disappear!! 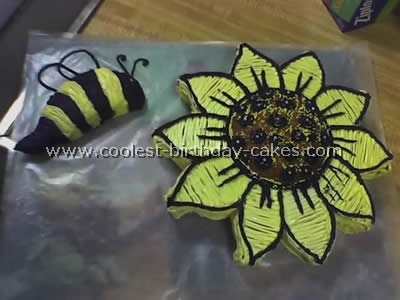 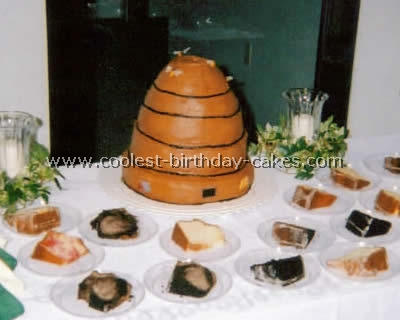 This Bumble Bee Hive cake was for my son’s elementary school’s 50th anniversary celebration. It was a blast to make. Since there were going to be a lot of people there I made it large and used a lot of different flavored cakes. I used the set of round pans for this cake: 14X2, 12X2, 10X2, and 8X2.

The top was the Wilton classic wonder mold. Each layer of this cake was a different flavor. The classic wonder mold is perfect since it already has a hole in the top for the bee’s to enter and exit. For each layer of this cake you need to have support. I used the Wilton dowel rods and cut out cardboard circles. I had one long dowel rod that went through the center to stabilize the cakes.

Each layer of the cake you need to cut off the edges to make this cake rounded. I used Wilton icing for the borders and homemade buttercream icing for the rest. I went to Michael’s for the life like bee’s and the little chalkboards and buses. 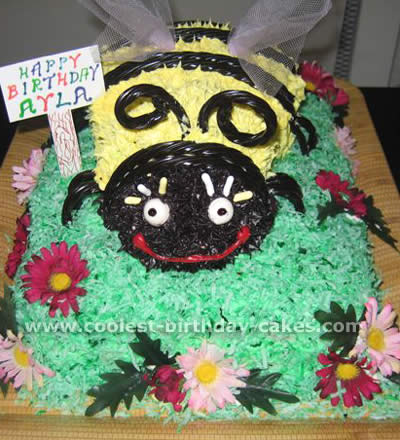 For this bee cake I made 2 rectangle shaped cakes for the base. I covered it with coconut shavings dyed green to look like grass. I used 2 round Pyrex bowls to create the body and the head.

The face is created out of candy. For the stripes I used licorice. The wings are just gathered up material tied to a toothpick. The flowers are the only thing that is not edible on the bumble bee cake. 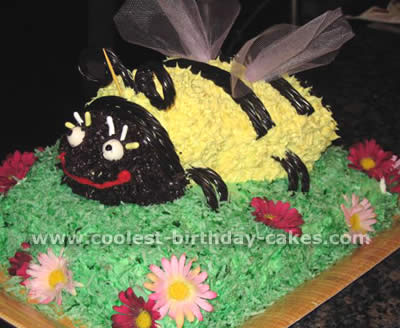 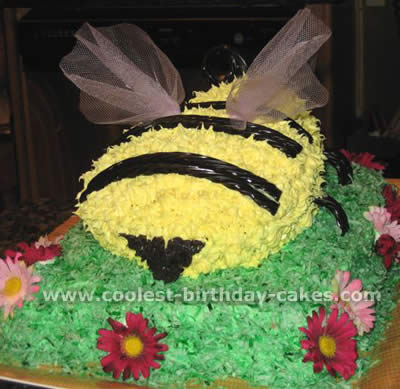 Cake by Linda B., South Africa 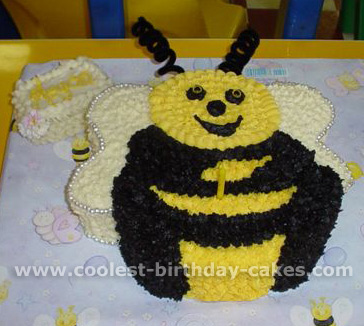 Read Linda’s “Party-Tale”: The story behind the cake…