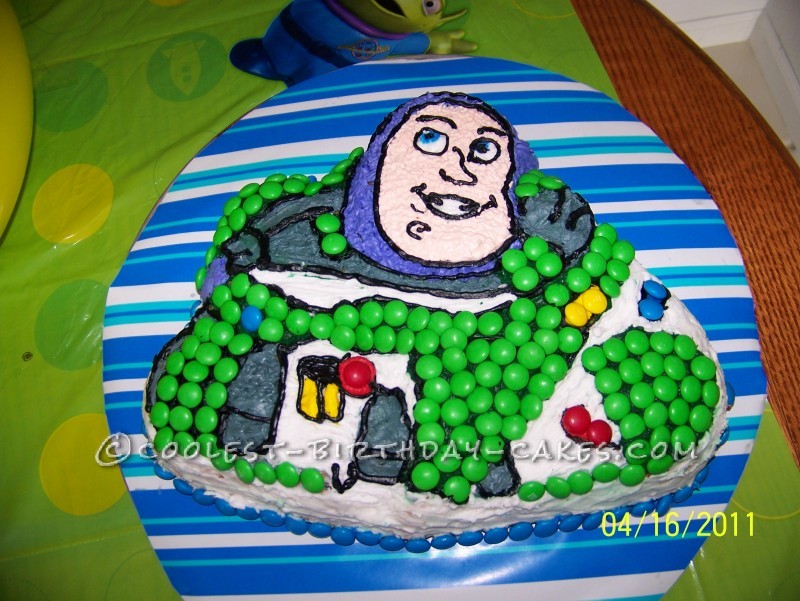 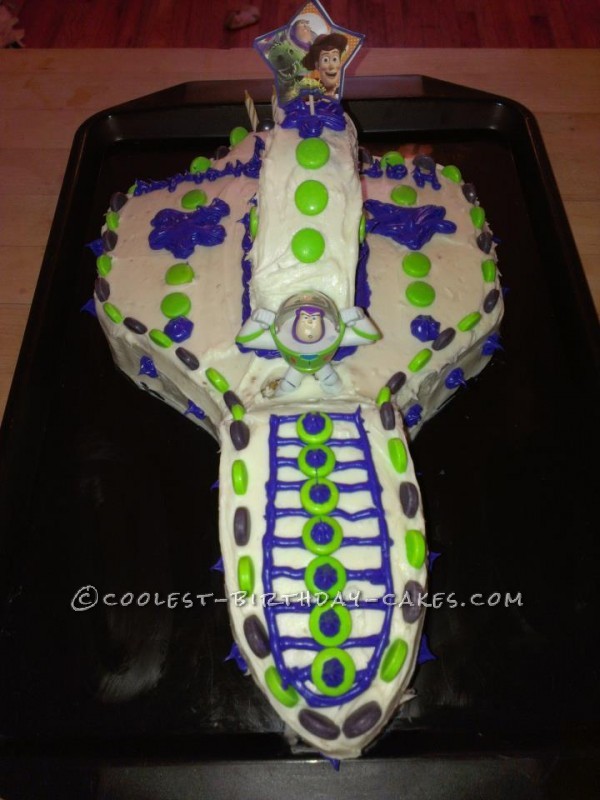 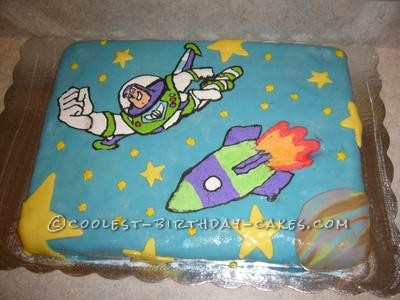 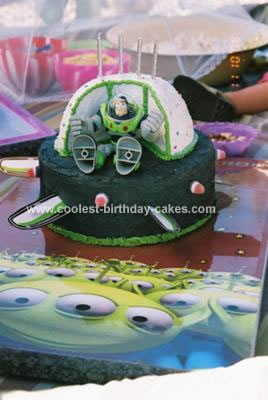 This Buzz Lightyear Cake was for my son’s (1 of twins) 4th birthday. Baking, building and icing the cakes are a huge effort between me (artist) and my husband (in construction)! I used two 25cm ring cake pans and a big Pyrex glass bowl (test-bake this part beforehand if you are using a big bowl) … Read more 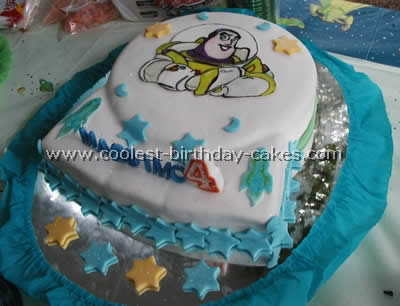 I learned to decorate this Buzz Light year cake during a course in Caracas. I used a regular vanilla cake and filled it with chocolate and cream filling with chocolate chips. The small round cake was the “practice” for the course. The big one was the final project. The cake cover is made with powder … Read more 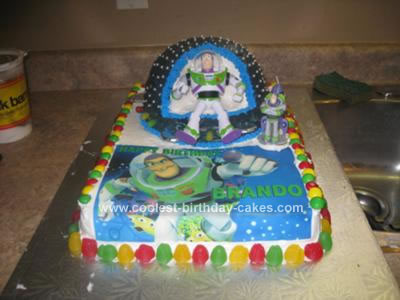 I got the idea for this cake from this website. I made the cake for my nephew’s 3rd birthday. He loves Buzz Lightyear and he had a special request for me to put lots of candy on the cake. The party was for 50 people so I had to make it quite large. The first … Read more 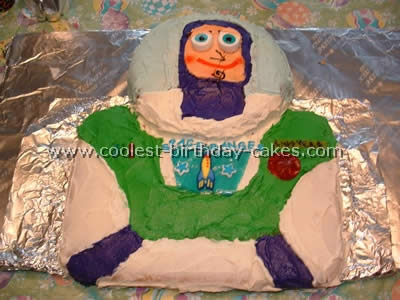 This cake was for my daughters second birthday. I used a round cake and a 9×13 sheet cake to make the shape. Then I used Wilton’s frosting coloring to make the different colors. I used the sugar candy cake toppers for the rocket and marshmallows for the eyes. I cut out the different shapes with … Read more 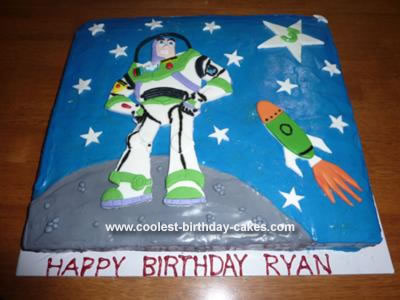 My son loves Buzz Lightyear so I made this cake for his 3rd birthday using ideas from this website. I made the figures out of moulding icing about three weeks prior to the birthday party. I found a picture of Buzz Lightyear, the rocket ship and star on the internet. I enlarged them to the … Read more 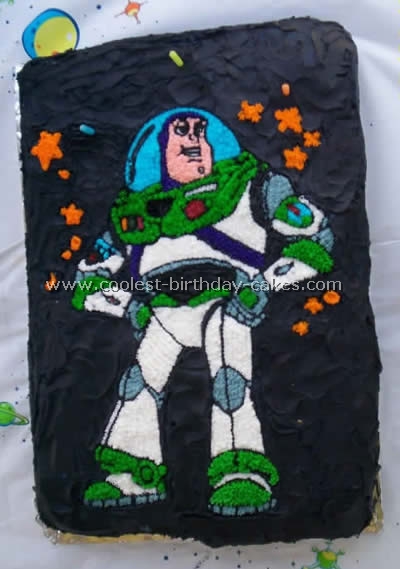 My three-year-old son wanted a Buzz Lightyear cake for his party, I couldnt find a cake pan anywhere so I decided to make a stencil. I did this by printing a picture that I liked, blowing it up to about 11 x 17 and tracing the picture onto wafer paper using an edible marker. From … Read more 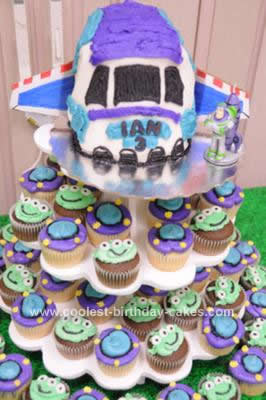 This Homemade Buzz Lightyear Rocket Birthday Cake was made for a Buzz Lightyear themed birthday for one of my friend’s son. The cupcakes are homemade chocolate and vanilla. They were decorated with homemade buttercream frosting colored with Wilton food color. The vanilla cupcakes are decorated to resemble little alien spaceships using the purple icing for … Read more 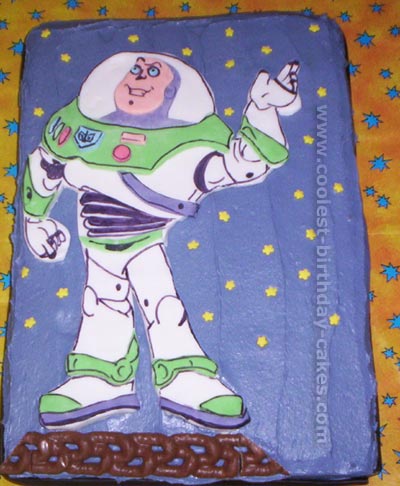 This Buzz Lightyear cake was for my sons 4th birthday, he just loves Buzz.The kids have a great Toy Story disc, which I printed out a picture of Buzz and made a template. I just used white fondant icing (plastic icing, pettinice) to get his full outline, then I tinted some icing green, red, skin … Read more 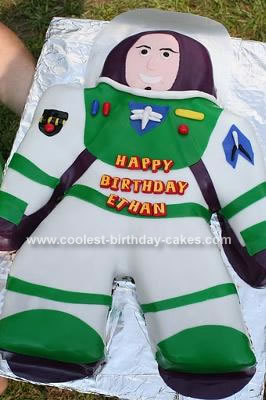 To make this homemade Buzz Lightyear cake I copied a coloring page (I got it blown up and than traced him out on top of the cake). I also bought a 12X12 pan – it took two batches of cake mix. I iced it and than covered it with all different color fondants. 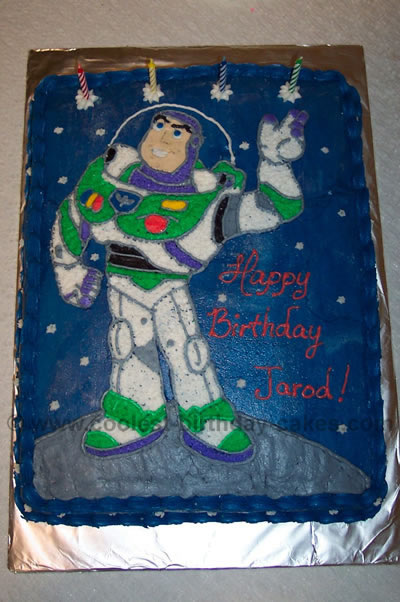 This Buzz Lightyear cake was for my sons fourth birthday. I used a picture from one of his Buzz Lightyear story books and made a photo copy of it. I enlarged the picture to fit on the cake and traced around it. It was my most challenging because of all the detail I had to … Read more 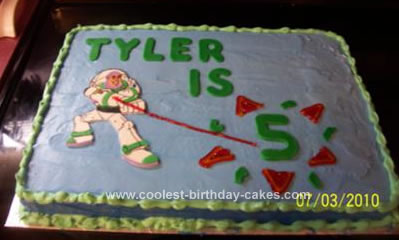 With the new Toy Story movie, my son wanted a Buzz Lightyear cake. I started out by finding a coloring page with an appropriate picture for the Buzz Lightyear Leader of Star Command Idea I wanted. I cut the figure out, and cut fondant to shape. I then freehanded all the lines with black edible … Read more 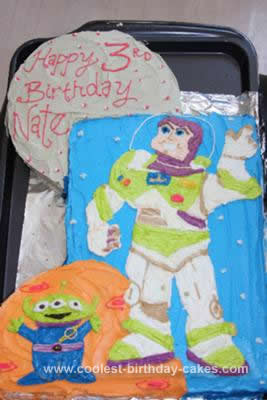 My son asked for a Buzz Light Year cake for his 3rd birthday. I always look on Coolest Cakes. com for ideas for every birthday. I found a nice cake a woman made of just a Buzz, but instead of following her lead and making a template first and tracing, I went free hand the … Read more 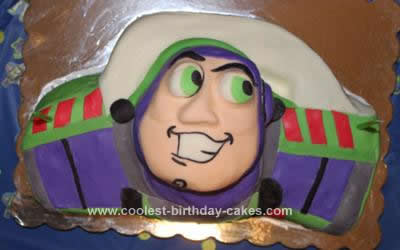 My son turned two and he loves Buzz Lightyear so I decided to sculpt a cake that looked like Buzz and use Fondant Frosting for the first time. First of all I now know that you should use a big piece of fondant to cover the entire cake first and then add pieces to it … Read more 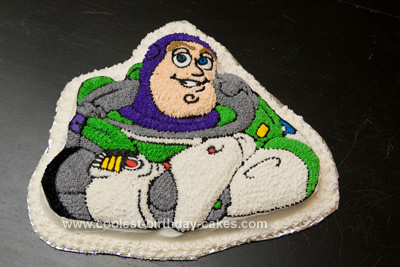 My son was totally obsessed with Toy Story when he turned 4, so a Toy Story cake it had to be! I have no creativity or baking/decorating skills, so I got the Wilton cake pan and icing color set and went to work. This Buzz Lightyear Cake was my 4th cake I’ve ever done (one … Read more 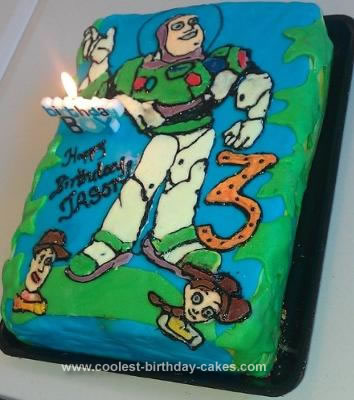 I decided to make a Toy Story inspired cake as Woody and Buzz are currently my 3 year old’s favorite characters (it changes every year!). I received the inspiration from this website and decided to do something I never tried before in my life, frozen butter cream transfer(FBCT). I really wanted to get it right … Read more 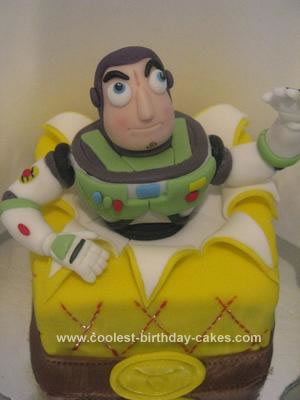 This Buzz bust cake was inspired by a very sweet little boy who loves Toy Story. It`s a personal sized cake (a 9×13 slab cut into 4 pieces and I just stacked two of them), the other pieces were saved to make pops! I covered the cake first in a thicker layer of white fondant, … Read more 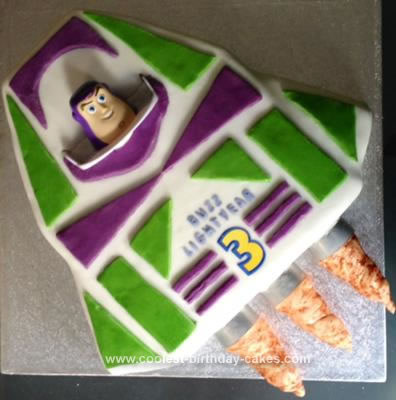 My son Casper is obsessed with Toy Story and loves Buzz Lightyear. He really wanted a Buzz cake so we compromised and went for Buzz’s rocket with Buzz in it! He also really wanted a chocolate orange cake – so I searched out a Nigella recipe which was lovely and moist and kept well for … Read more 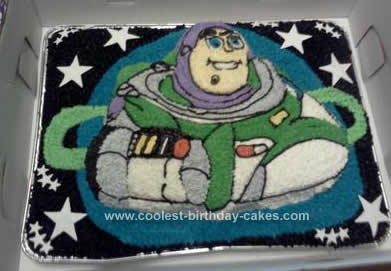 I made this Buzz Lightyear Birthday Cake for a little boy’s 2nd birthday. The bottom is 1/2 sheet cake with homemade french vanilla cake and the top is my recipe for a moist chocolate cake (grandmom’s recipe from Germany). I make a delicious buttercream icing which is homemade. The stars are Wilton’s new sugar sheets … Read more 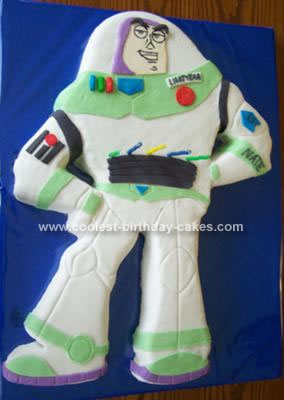 I put together several ideas I saw in Google-images and came up with this cake for my grandson’s 5th birthday. This was my 3rd attempt at using fondant and my first attempt at making a “sculpted” cake completely covered with fondant. I used homemade marshmallow fondant– very easy and inexpensive to make and it also … Read more

I made this Buzz Lightyear birthday cake for my son’s 4th birthday. I used 2 1/2 sheets, 1/4 sheet for the body, and a small mixing bowl for buzz’s helmet/head. I used Hershey bars for the wings. I did a thin layer of frosting with a cherry preserve/cherry jell-o combo in the layers! (1 jar … Read more 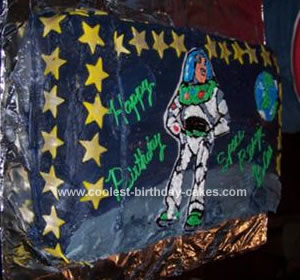 My son loves Buzz Lightyear, and I decided to tackle making his second birthday party cake. I used fondant, and Wilton’s ready to go marshmallow icing in a bucket. It can be found at Wal-Mart at a better price than most craft stores. I baked four 9 x 13 cakes and double stacked them. I … Read more