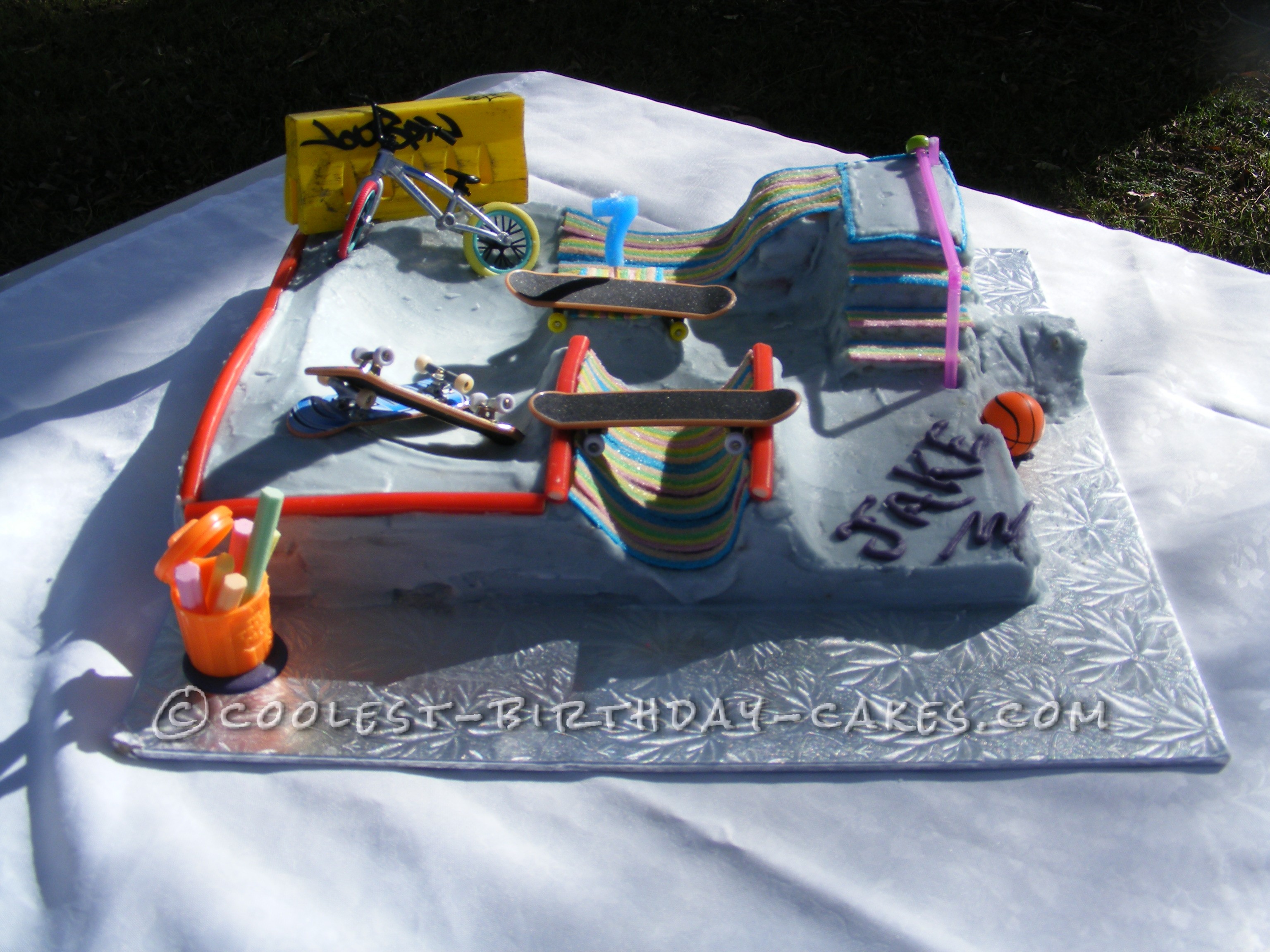 This is the 3rd year in a row we made a skate park cake for our son ( 7 this year). It’s always a joint effort. Taste is important even if the cake looks great it’s got to taste good too. I always use the basic butter cake recipe (in most cake books, ) and … Read more 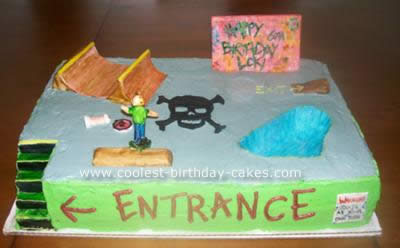 This cake was for my son Loki’s 6th Birthday at the skatepark. He is into skateboarding so I figured a skatepark cake would be awesome for him. I started out with 2 sheet cakes (1 layer chocolate and 1 layer yellow)put buttercream between the layers then a layer of around the whole cake. Then I … Read more 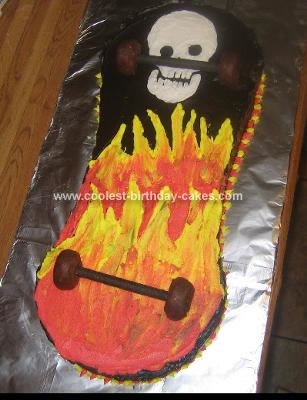 My cousin just loves skateboards and anything having to do with them. I made this Skateboard Cake for his fourth birthday party after seeing several on this site. I also blended the idea for the skull off of this site as well. I started with a 9X13″ and a 9″ round cake. I cut the … Read more 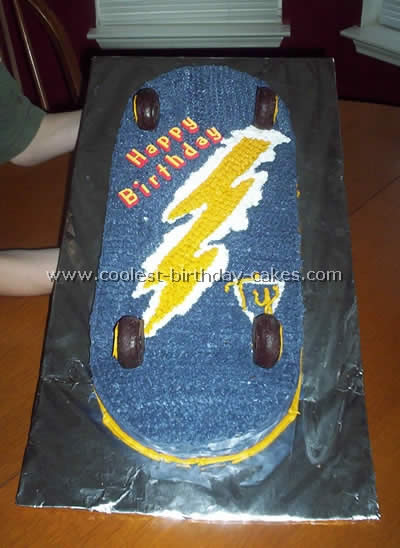 I made this amazing cake for my sons 10th birthday. He likes to design skateboard decks and I thought it would be cool to transfer one of his designs to a cake for his birthday. I used a 13×9 cake pan and a 9″ round pan for the cake. I cut the round cake in … Read more 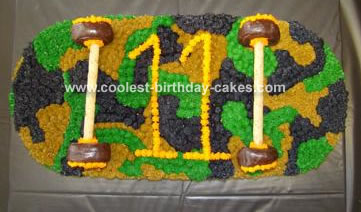 Took a 9X13 pan and 1 round pan. Cut the round in half and put it on each end of the 9X13 and iced it. I used Homemade Color Frosting Mixed Green and Brown Together for the army type green color. Mixed up some orange for some details and black and brown for the Camo. … Read more 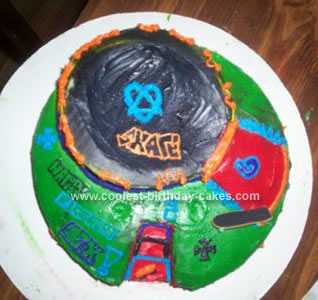 My nephew wanted a cool birthday cake. But, he couldn’t think of what he wanted. He was turning 12 so, it couldn’t be just a cartoon character or basic design it had to be AWESOME! The only thing I could come up with that I KNEW he liked was skateboarding. However he didn’t want JUST … Read more 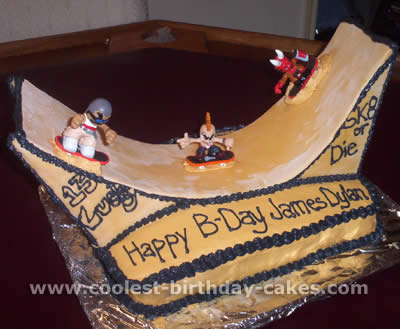 My son loves to skateboard and so I thought he would like a skateboard themed cake. It was actually pretty easy, I made just a regular rectangle cake and then I cut out some triangles from cardboard and used fondant over that to make the ramps. I used little Tech Deck guys as the skaters. … Read more 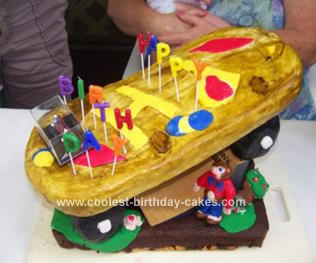 This skateboard cake was a birthday cake. We made the skateboard out of rice crispy. Chocolate cake on the bottom and covered the skateboard and parts of the cake with fondant and hand painted everything. 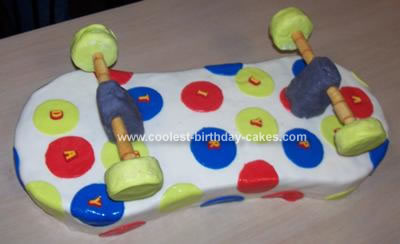 This Skateboard Birthday Cake was made with one 9 x 13″ chocolate cake and one 9 x 13″ white cake and frosted with homemade whipped cream frosting. We cut a board the shape of a skate board to hold the cake. We laid the 9 x 13″ stacked cakes on top of board and cut … Read more 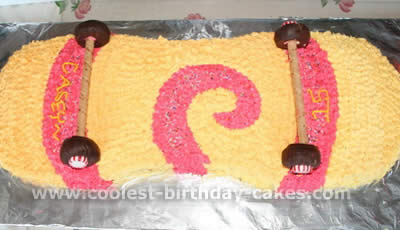 I made this amazing cake for my neighbors 15th birthday. He likes skateboarding, so I looked on the internet to find a picture or recipe. The best one I found was on Disney’s Family fun site. I have made several cakes, and have had great success using their ideas. I used about 6 cups of … Read more 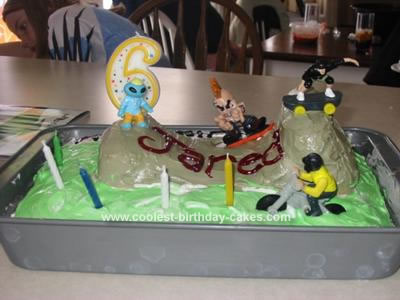 This skate park cake was for my son’s 6th birthday, in 2006. He is really into skateboarding. After a couple of years of practice I would have done it a little different, but looking back I didn’t think it was so bad. I started with 9×13 cake and frosted it. Then I took 6 Twinkies, … Read more 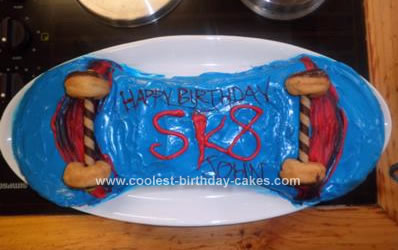 My son had a Skateboard theme for his 8th birthday. I checked out the net for ideas and came up with this one based on a combination of a few ideas I saw. I used 3 packet cake mixes (I used butter cake). 1 packet for the round cake and one for the rectangle cake. … Read more