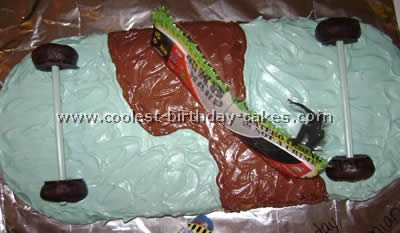 My son loves skateboarding so this year he wanted me to make him an amazing cake instead of buying one because he likes it better. I used two boxes of cake mix (one for 9×13 pan and one for a 9inch round pan). I baked them the night before and the next morning I got up and cut the 9inch round one in half. I placed the 9×13 first and then placed each half of the 9inch on either side of the 9×13.

I used two tubs of butter cream icing and one tub of chocolate. I dyed the butter cream icing and began icing. I used my handy butter knife to ice with instead of the star tip. I used four donuts for wheels and a section of plastic clothes hanger for the axels. I also placed a skateboard scene in the middle (I bought it from eBay). This was really easy and it turned out to be an amazing cake. I love this site, I added it to my favorites!

I made this amazing cake for my sons eighth birthday. He is really into skateboards. He picked out the type of skateboard deck he wanted and I reproduced into a cake.

I used a 13×9 cake pan for most of the deck. Next I cut a 9” round in half and put them on each end. I iced the cake with butter cream icing and then I used a star tip to make the design. I used four chocolate doughnuts for the wheels with pretzel rods in the middle. My son and his skateboard friends were amazed.

A friend asked me to make her son a skateboard cake for his 13th birthday. (I was honored to do so). I first baked two boxes of store bought cake mixes for the bottom of the cake using a slab cake pan that I have. Than I baked another box of cake mix for the 9″ round cake and one small rectangular cake pan.

I first cut 9″ round cake in half. This will be used for the rounded edges of the skateboard. Set this aside for later. I began by icing the slab cake white in buttercream icing putting about six cut off wooden dowels in the slab cake to secure the half round and rectangular pieces which I placed on top of the slab cake (one half round piece first than rectangle then the last half round). I than decorated the “skateboard” using the star tip. I used mini donuts for the wheels and dowels.

This skateboard cake was an amazing cake and he loved his cake!

This was the easiest cake I ever made for my son. He was turning five and he absolutely loves Tony Hawk. I used a 9X13 for the middle and a round cake cut in half for the ends. His favorite colors are red and blue and I got an edible image made for the graphic. The wheels are pirouette cookies with donuts.

This turned out to be an amazing cake and was a big hit and all the boys loved it!

Place one half of the 9 inch round on each of the short ends of the 9×13. Ice the cake. Using star tip 21 cover the entire cake creating a pattern of your choice. Let the icing dry a little. While the icing is drying make the wheels. (Need two sets)

Take two chocolate doughnuts, place one pirouette cookie in the middle and glue with frosting. Use peppermint candies in the outside center of the doughnuts. Let dry for a while then place on top of cake. This was a most amazing cake!

I made this amazing cake for my son’s 10th birthday. He likes to design skateboard decks and I thought it would be cool to transfer one of his designs to a cake for his birthday.

I used a 13×9 cake pan and a 9″ round pan for the cake. I cut the round cake in half for the ends of the skateboard. The longest process was icing the cake. I did the deck of the skateboard in small stars and I used chocolate donuts for the wheels. He thought it was awesome!

My son loves to skateboard and so I thought he would like a skateboard themed cake. It was actually pretty easy, I made just a regular rectangle cake and then I cut out some triangles from cardboard and used fondant over that to make the ramps. I used little Tech Deck guys as the skaters.

My son really thought it was an amazing cake and so did his friends. I thought it might be good inspiration for you cake makers out there. I would go with a bigger base or a smaller ramp next time!

I made this amazing cake for my neighbor’s 15th birthday. He likes skateboarding, so I looked on the internet to find a picture or recipe. The best one I found was on Disney’s Family fun site. I have made several cakes, and have had great success using their ideas.

The cake itself is a 9×13, with a 9-inch round, half on each end. Freezing the cake for a few hours helps before shaping the sides (I just put it outside, at -11 degrees – it works!). I shaped the sides slightly to look more skateboardish.

I used about 6 cups of icing, 4 yellow, 2 red. I covered the cake with a very thin layer of yellow, and then put outside for a few more minutes. With a toothpick, I etched a swirly design in the icing. I used a small star tip and covered all my mistakes! However, if you do not plan to “star” it, you don’t need 6 cups of icing.

For the wheels, I used chocolate covered donuts, and for axels (if that’s what they are called), Pirouette cookies. I used mint candies on the outside of the wheels. Then, personalized it by writing “Happy Birthday” and 15 on the red stripes.

Although this may sound tedious, from beginning to end, with baking time included, it took about 4 hours. Also, I’m sixteen, a bit of a beginner, but it turned out great, and was fairly easy. The stars were time consuming though.

First I built a platform, Plexiglas to hold the birthday cake, dowel rods to hold the cake up and a board underneath to keep it all steady so it would survive the ride to the party.

I baked two cakes and cut them to the shape of the Plexiglas platform. I used 4 cupcakes for the wheels and put icing all around to help hold them in place. I was so worried that a wheel would fall off before the party that I kept the 3 colors of icing so I could repair. My 8 year old son LOVED the birthday cake – skateboarding is his favorite pastime. It was a big hit and well worth all the time and effort. He told me I was the best mom in the whole world!!!!