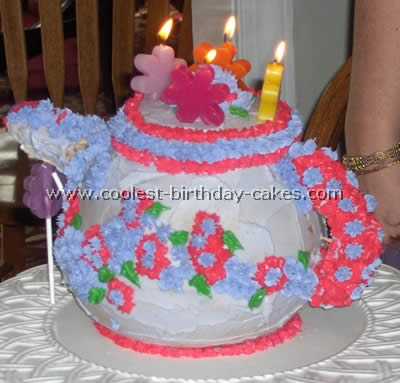 My three year old wanted a Tea Party Theme for her birthday so I thought a tea pot would be perfect. I found on this web site ideas for childrens birthday cake recipes. I baked the cake by making two halves in two bowls then placed one atop the other with frosting between.

The top is made of cake shaved off the bottom. The spout and handle are made of rice krispie treats though they ended up being a bit heavy and needed to be supported (I used a lollipop for the spout). Another time might try marzipan for the handle and spout. It was really adorable though and she loved it!

My future daughter-in-law baked this cake and we decorated it using ideas from childrens birthday cake recipes from this site. We white frosted the cake, for the spout and handle we used pastel multi-strand Twizzlers. For the top we used a Ring Pop.

The lid is outlined with a few strands of the Twizzlers. The bottom of the teapot has the rope-like Twizzlers. Decorations for the flowers were M&M’s or Skittles. We cut the teabags off and had three of the tea tags hang down from the lid. The spout had to be shaped using toothpicks. If it is a warm day do not add the Ring Pop as it will melt. It would be best to add the handle and spout the day you serve the cake or the strands may peel apart.

My six year old daughter wanted a tea party for her birthday so I searched for childrens birthday cake recipes and found a teapot and tea cups for her cake.

I bought a dome pan and made two separate cake mixes. I stacked them on top of each other to make a round ball then frosted it with butter cream. I then made a batch of cupcakes for the tea cups. I used fondant to decorate.

The cake idea came from a magazine on childrens birthday cake recipes. I looked at the picture and did my best to copy it. The lady that I made the cake for sells teapot collections and wanted a teapot cake for her party.

The pot is two round cakes shaved in the shape with a knife. The lid handle and spout are all fondant held onto the cake with wooden sticks.

This teapot cake was inspired by the Tea Party Birthday decorations actually featured on this site for childrens birthday cake recipes.

I made two cakes in the two quart pampered chef batter bowl. After baking, trim off the bottoms of each cake, spread a layer of icing on the bottom of one and then stick together so they look like an egg- the shape of the teapot.

We then used butter cream, icing all over the cake and filled the colored areas in with a star tip. For the spout and handle I used store bought sugar cookie dough and shaped them into the right shaped. Baked them until they were very crisp. I then decorated them with stars to match the cake and stuck them into the side of the cake using sucker sticks. We used a tootsie roll pop for the top. This was my first attempt at any cake and it was a big hit at the party especially with my two year old twins!

I baked two banana cakes in Pyrex bowls, sliced off the tops and joined them together with butter frosting. I colored the frosting with turmeric to get the yellow color. Once joined together I then covered the rest of the cake with the frosting (this was a challenge in 37 degrees!).

I used different colored liquorices to make the flowers and decorate the lid and base of the teapot. The liquorices I used can be molded in the any shape but I just cut the sticks on an angle for the flowers and leaves. The spout and handle were made from cardboard templates (from the internet) but in hindsight I could have made these from the liquorices also.

Thanks to your website, I copied this idea from childrens birthday cake recipes.

We decided to have a tea party for my daughters 1st Birthday. I searched the internet and found this site which had several teapot cakes. I used several of the childrens birthday cake recipes for ideas.

To attach the handle and spout I used many toothpicks and a wooden skewer through each piece. I was really impressed with my efforts as this is the first cake I have ever attempted to decorate. The party was a success and everyone thought the cake was amazing!

I decided to do this cake as a practice cake for the upcoming Mother’s Day. My Grandmother loves Delft teapots and teacups as we are Dutch. I just copied this from other childrens birthday cake recipes.

I used two Pyrex casserole dishes and made a pound cake because it makes a very firm cake making it easier to sculpt. I then sculpted it basically eyeballing it until I had a nice round “teapot” shape.

Next I iced it in butter cream frosting and covered it with fondant for a smooth porcelain look. And decorated it with a similar pattern I saw in A Collette Peters wedding cake book. The teacups were made from cupcakes and covered in the same manner.

Simple childrens birthday cake recipes and lots of fun. Use the Wilton round baseball mould for the round body. Use icing of your choice and I used marzipan for the spout and handle and flower decorations. All the girls love the dimensional cake.

My daughter for her 7th birthday party wanted a tea party theme so I decided to make one of the teapot childrens birthday cake recipes. I called some of my best friends and we got to work.

For the teapot shape I used the mixing bowl of a kitchen aide mixer (yes its safe to use in the oven) and the base to give height and shape was a 2-inch thick cake pan from Wilton. Inside the layers of the cake as well as the outside of the cake was a buttercream frosting flavored with cotton candy flavoring.

The pink fondant covering the outside of the cake was made with marshmallows, powered sugar water, and a whole lot of “elbow grease” (this is where the help of friends really comes in). The cake pictured is our/my practice cake before the big day.

Recipe for buttercream frosting: 2 sticks of butter at room temperature, 2 cups of Crisco, 3 tsp for flavoring (add one at a time until desired taste), 2 lb bag of powered sugar, 1/2 tsp of salt, and 2tbs of meringue powder (I like Wilton’s brand). First beat on low butter, salt, and Crisco; then add half of powered sugar and meringue powder until well mixed. Keep adding sugar until its the desired consistency (if it gets too thick add 1/2 tsp of milk to thin back out). This frosting can be stored for a couple of weeks if put in a well-sealed container.

I made this cake for my baby shower. I used a glass-baking bowl to make the bottom and top of the pot. The spout, handle and top are made from marzipan along with the flowers on the sides. The handle and spout are attached with toothpicks. I bought candy roses for the top. This is one of the childrens birthday cake recipes that is very simple to make and a lot of fun.

I made this for my Mother for her birthday. The flowers are made out of rolled fondant.