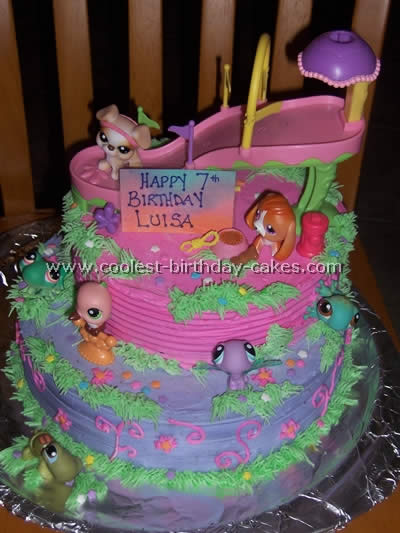 My daughter wanted a Little Pet Shop cake but I could not find a pan so we bought a play set and used some of her figurines on a layer cake. The top layer was chocolate and the bottom was cherry chip. She loved the decorations. The hint was to match the colors as close to the actual Little Pet Shop theme colors. 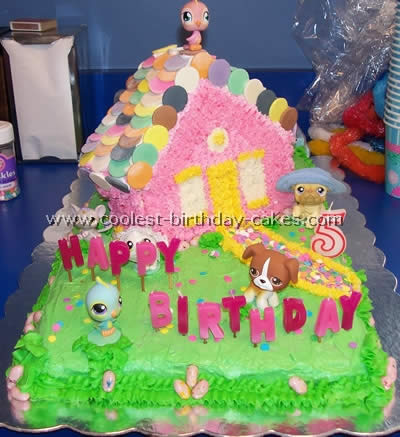 For my daughter’s fifth birthday she asked for a Littlest Pet Shop party. I knew that I would use the pets but wasn’t sure about what else until I found some ideas for childrens cakes on this site. I found the 3D house cake pan and then I baked two 9×13 cakes and baked the house cake.

I put the two 9×13 cakes side by side on the cake board and then iced them both in green. I sat the house cake on top of the two at an angle and I secured with bamboo skewers. Then I iced the cake with white and put the roof on. I used Necco wafers for the shingles and then I used the star tip and tinted butter cream frosting in pink and iced the house.

I also used yellow and white with the star tip to out line the doors and the windows. To make the path to the front door I used spring confetti sprinkles from Wilton. For the pool I used blue tinted butter cream frosting and then put tutti fruity jelly beans around it. I then used the Wilton blue sugar to put on the pool so that it would sparkle.

I used green Necco wafers set in the icing to place the pets on and then sprinkled spring confetti on the cake to resemble flowers in the grass. I put jelly beans around the edges. Everyone at my daughter’s party just loved the cake! It was a big hit! 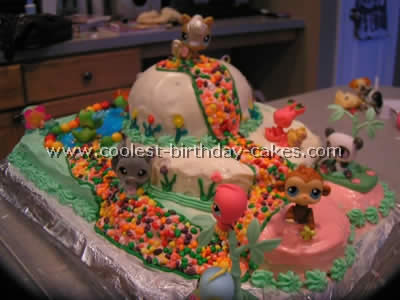 My 6 year old daughter has a huge collection of these “Littlest Pet Shop” pets. So we decided that we would make a cake around that theme. Well there is virtually nothing out there for this theme at least no such ideas for childrens cakes that I could find, so I gave it a shot on my own

Clueless, I basically built this LPS “scene” cake pretty much as I went. So I thought I would share this idea for all the other LPS lovers out there. First I knew I wanted to showcase her favorite LPS pets. So I had her pick out the ones she liked the best. I realized that the best way to showcase them was to create a “scene” that they could be in. I knew I needed several surfaces to place them on and I thought I would create a “tiered” effect to accomplish this.

I used 2 cake mixes and about 3-4 cans of frosting (melted soft). I made a base out of a 9×13 cake pan a layer from an 8-9 inch round cake pan and 2 small cakes from my smallest stainless steel mixing bowls in 2 different sizes. The mixing bowl cakes had their bottoms trimmed to have a flat surface on which to sit on the big cake. All cakes COMPLETELY cooled off and chilled in fridge. 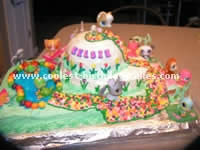 The 9×13 cake was cooled and turned out onto a tray and frosted with a green tinted frosting. On this layer I created a “frog pond” by placing toothpicks in the shape I desired and filling it in with blue decorator gel & placed colorful mini gobstoppers around it.

The round cake and the largest of the 2 “bowl cakes” were placed on top as the “mountain” than frosted white. Here is where I chose to melt the frosting to a liquidly consistency and pour it over top the cakes and smoothed it with a knife. This went really well and made it look very smooth and satiny and I didn’t have to work hard to smooth it.

The smallest bowl cake (bottom cut off) was placed on the side like 2 “islands” and frosted pink (per my daughter’s request). Again with melted frosting. I created a “sidewalk” by outlining a path with frosting in a tube and filling it carefully with nerds candy. I piped green plants and green trim around the bases of cakes with frosting in a dec. bag and a decorator tip to cover any cracks where the cakes came together.

I made tulips from decorator frosting in a little tube. I used candy letters for her name. Now I placed the frogs in the pond and the other animals throughout the scene with her favorite pony pet on top! Not including bake and cool off time for the cakes it took all afternoon to decorate this. But it wasn’t really that hard just time consuming. EVERYONE thought it was aDorable! The hard part was choosing where to cut into it.

Good luck with your own childrens cakes! 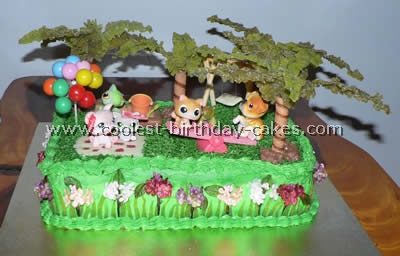 For my daughter’s 6th birthday she wanted a Littlest Pet Shop themed cake at the park. Not being able to find any such childrens cakes, I checked out the internet to find ideas when I came across this website. I tried to make everything edible except for the Littlest Pet Shop Toys, the balloons, and the flowers.

The grass was green coloured desiccated coconut. The palm trees were made out of green sour apple straps lollies cut into shape with biscuit trunks. I used green wire to weave through the leaves to shape them. 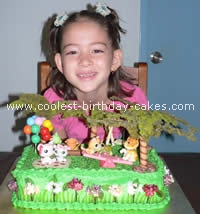 It wasn’t one of the easiest childrens cakes, it took a lot of time, but it was fun and well worth the look on my daughters face when she saw it. 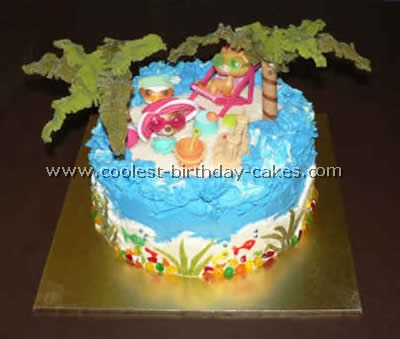 The sand was crushed up wafer biscuits. The palm trees were made out of green sour apple straps, lollies cut into shape with biscuit trunks. I used green wire to weave through the leaves to shape them.

I used the same green sour apple straps to cut up some shaped seaweed and crushed up some boiled lollies for the little rocks. The fish’s bubbles are edible sprinkles and the rest is all icing. 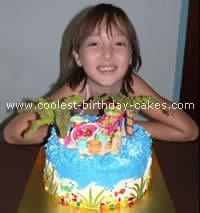 This cake was incredibly quick, easy and lots of fun!