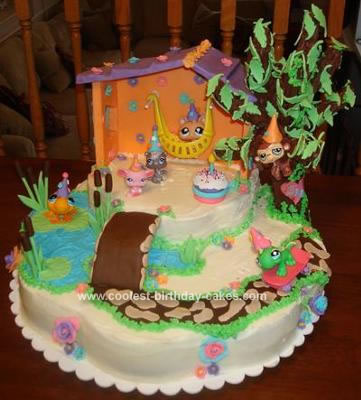 I made this Littlest Pet Shop Toys Cake for my daughter’s 9th birthday. Over the past several months she has been obsessed with Littlest Pet shops and has accumulated quite a collection of figures and buildings. This was the beginning of my inspiration.

All of the decorations on the cake (except for the LPS figures) are made out of fondant or buttercream frosting. I had to make these several days ahead of time so they would have plenty of time to harden. I used my daughter’s LPS clubhouse as the model for my colors and shapes.(By the way, you have to use almost half of a jar of paste food coloring to get that dark of a brown!)

The fondant house was put together using toothpicks inserted into the sides and top to hold it together. I also inserted two sucker sticks into the back to hold the hammock (this was a plastic piece that came with the clubhouse).

I made fondant roses, lilly pads, a birthday cake, birthday hats for the figures, an arched bridge, a path, stones for the path, cat tails, little flowers for the house, and leaves for the tree all out of fondant.

The tree was made out of the center cardboard of a roll of paper towels. I trimmed it down to the size I wanted and then stuck sucker sticks into it in various places for the branches and hot glued them in place. Then, the whole thing was covered in tin foil. I then frosted over it with stripes of chocolate buttercream frosting (homemade) with a medium sized open star tip. I also did this in advance so the frosting would get hard (I knew no one was going to eat the tree). Then, I “glued” on the fondant leaves with more chocolate buttercream.

The cakes were made with a 15 inch flower shaped pan and a 9 inch flower shaped pan. The 15 in. cake took two boxes of Devils Food cake mix and the 9 inch cake took about a half to three quarters of 1 box of white cake mix. The remaining white cake mix I marbled into the chocolate just to use it up. Once the cakes were baked and decently cooled I put them in the freezer over night. I took them out of the freezer for just about 30 minutes, so they were still pretty firm but not frozen solid, and cut them horizontally across the center so I could fill them. They were filled with white buttercream frosting (homemade). (at my daughter’s request, she has no imagination:) I then stacked the cakes and frosted them smooth with white buttercream frosting. I find that the cakes frost much smoother when they are frozen.

Now, for the fun part! Putting all the decorations on. I tinted some buttercream blue and swirled it on the cake for the pond. Then,I put the fondant lillypads and cattails in the pond. Then I placed the path and stones and bridge. Now for the house. I put 3 dowel rods into the cake underneath it but it turned out not to be enough support and later into the evening the back side of it started to sag:( The tree was then put into the base cake and “glued” to the side of the house with buttercream. It wasn’t very stable and if I would have had to transport the cake it surely would have fallen. Definitely need more under support next time! Then I had fun just piping green tinted buttercream around for the grass. The little flowers for the house were “glued” on with buttercream as were the hats for the LPS figures. A few more flowers and some fondant roses placed here and there and I was ready for the LPS figures. I of course used her favorite ones.

All in all it was an amazing cake and I had so much fun making it. I definitely learned how NOT to do some things and, my daughter was thrilled and it tasted SO good! 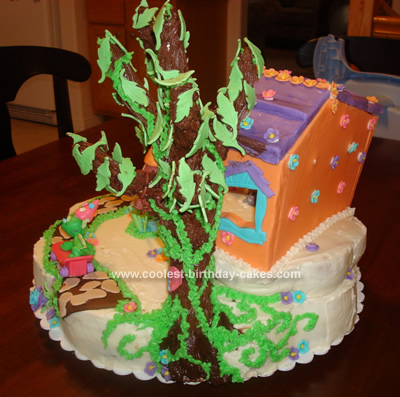 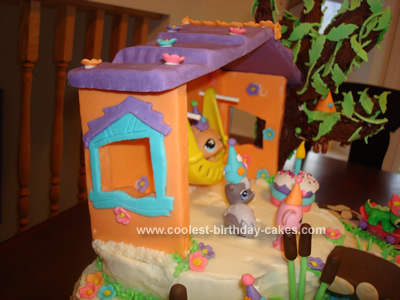 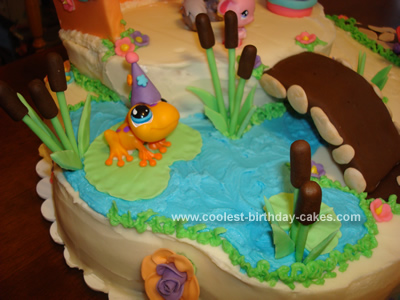 Coolest Littlest Pet Shop Cake 22 – A Day at the Beach