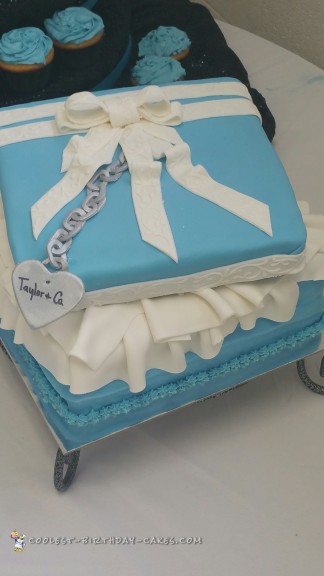 This cake was made under extreme circumstances. I had made the commitment during the month of December, the bride to be had tasted the cake and was pleased. She told me the theme of her shower, put me in touch with her coordinator, sent me a copy of the invitation and said “go for it”, well that made me nervous in itself.

So I got on line and started looking at Tiffany boxes. Well low and behold, it was the week to get started, my mother was taken to the hospital and placed in ICU, I couldn’t back on her and I work a full time job, so I just did it.

I started with the charm, because I wanted it to be dry all the way thru. To make the charm, I started with white marshmallow fondant and a pinch of Tylose powder. I cut the charm with a medium heart cookie cutter and mad the links out of the same, cutting them out with a tiny “O” cookie cutter. I cut the O’s at the end and link them together, then cut one in half and attached everything to the charm, and let it dry on parchment paper.

The next night I sprayed it with silver satin color and continued to spray it for two more nights, while I prepared the cake. Once it was the color I wanted, I wrote the name on it with the edible ink pens.

The cake and icing were general white cake with cream cheese icing. To decorate the cake, I baked three 10×10 squares, iced the bottom two, placed three dowels in it that were maybe about an inch above the cake to hold the top, placed them in the fridge to firm up and worked on the top of the box.

The fondant was white marshmallow that I did with royal blue gel food coloring, I had to be careful, because I thought that I had the light blue at home, but not a drop to be found. I live in a rural area and if you don’t get everything before 9:00 you are out of luck. It came out the color of the invite, after a lot of mixing. (Most of the cakes I bake, they send the invite and I create from that.

I also try to make everything edible so there is not a lot to discard)The top layer was placed on a circular cake board instead of square so that the corners wouldn’t punch thru the fondant, and it could be cut and served for the correct number of people, iced, it and covered Cut the ribbon, rolled it out on the mat that has the scrolls on it.

Trimmed out the top, added the bow, placed deli paper in the bow so that it could dry while I worked on the bottom of the box. Rolled out and cut the measured squares for the box, placed them on the sides of the iced cake with just a little water and paint brush. While the sides were drying, I rolled out more white fondant and cut the strips in 2 inch strips, and rolled them without the rubber bands to as thin as I could handle them to make the tissue paper for the box, this took time, because I kept sticking my fingers thru it, and making the folds was not easy.

I finished the first row and them added the second row so that it would look full and I didn’t want it to weigh down the box. Used a number 18 tip and added the boarder on the bottom. Left every thing out on the counter for night to dry. While I was doing this I made and iced cupcakes for the cupcake stand she wanted.

The blues matched up really good. Next day covered everything in plastic wrap boxed it up, took it to the venue and set it up, along with extra icing in case it gapped. Bride to be was pleasantly pleased and I was asked for cards, which I don’t have because I always want it to be fun. 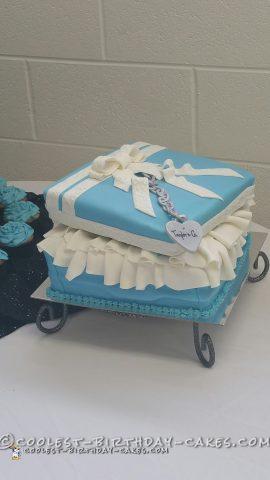 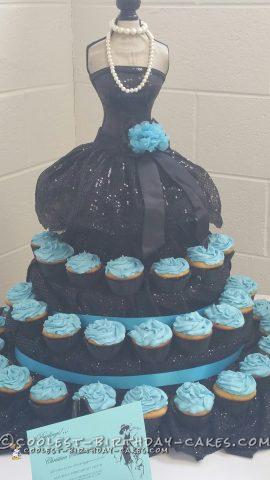