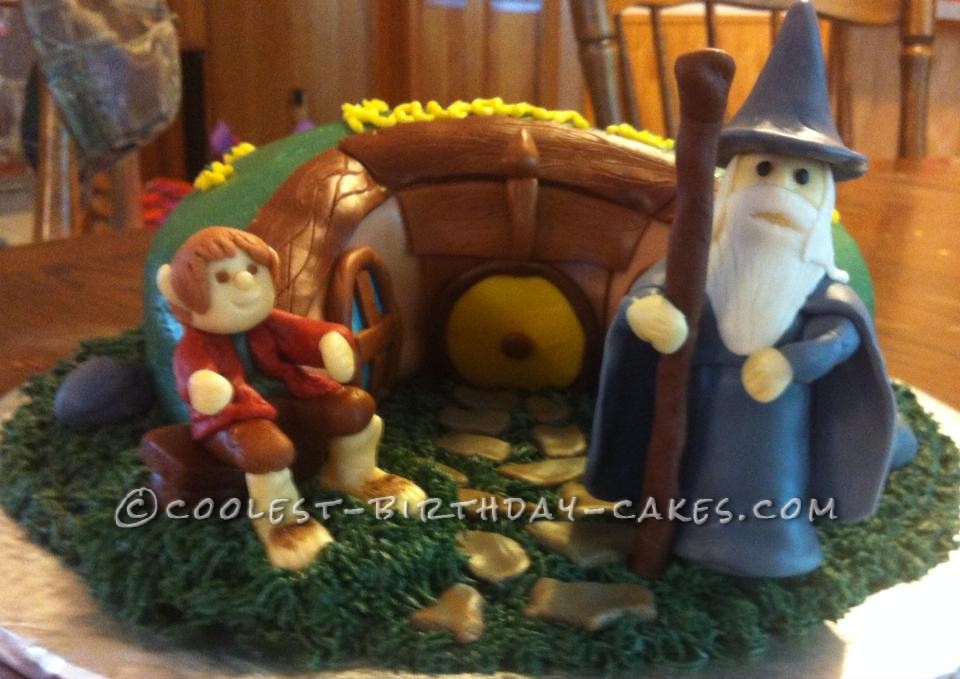 My niece really wanted a Hobbit House cake for her birthday.  So, I started by looking at good ol’ Pinterest for inspiration.  Then, I got started my design.

I worked on making fondant and buttercream about five days before I was going to decorate.  I needed several colors of fondant to make my figures and details on the house.

I sculpted the figures of Gandalf and Bilbo a few days before I decorated my cake.  I made the bodies first, and then worked on the heads.  On Bilbo, I did the pants first out of brown fondant.  I then added big hobbit feet and painted on some hair using gel food coloring.  I made his torso green.  I then cut out pieces of red fondant and build my jacket next.  His hands were balls of fondant that I added details to, and then stuck on the wire.   His head was a bigger ball of fondant that I shaped and then added eyes, ears, a nose and hair to.  I then made him a stool sit on.  Gandalf is made from a wire frame, and covered in gray fondant.  Once, I had his arms on, I made small balls of fondant for the hands and marked some detail for the fingers and attached that to the wire frame.  I then made a bigger ball and added a nose with some eye sockets.  I added the white hair and eyes after that.  I took some gray fondant and shaped it into a hat and placed it on his head.  His staff is made out of a kebob stick covered in brown fondant.  That is how my figures came to life.

The cake a two layered chocolate cake carved and iced with chocolate buttercream.  I then used marshmallow fondant in green is my base.  I added layers of brown for the door frame detail, and then I added a yellow door.  I added blue fondant for some windows and framed them in more brown fondant.  I then piped out green buttercream grass and created a gray stone path out of fondant.  I added a few boulders around the house to give is some detail.

The hardest part was the figures.  I have made figures in the past, and they always give me difficulty.  I have to say these turned out so cute.  I just love them.  I love the hairy feet on Bilbo and the beard and hat on Gandalf.

Everyone gushed over the cake, and my niece loved it so that was the main thing.  Almost didn’t want to cut into it. 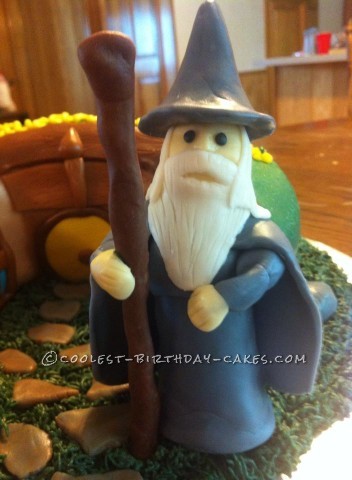 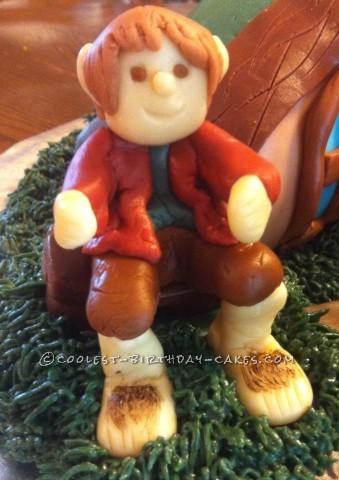