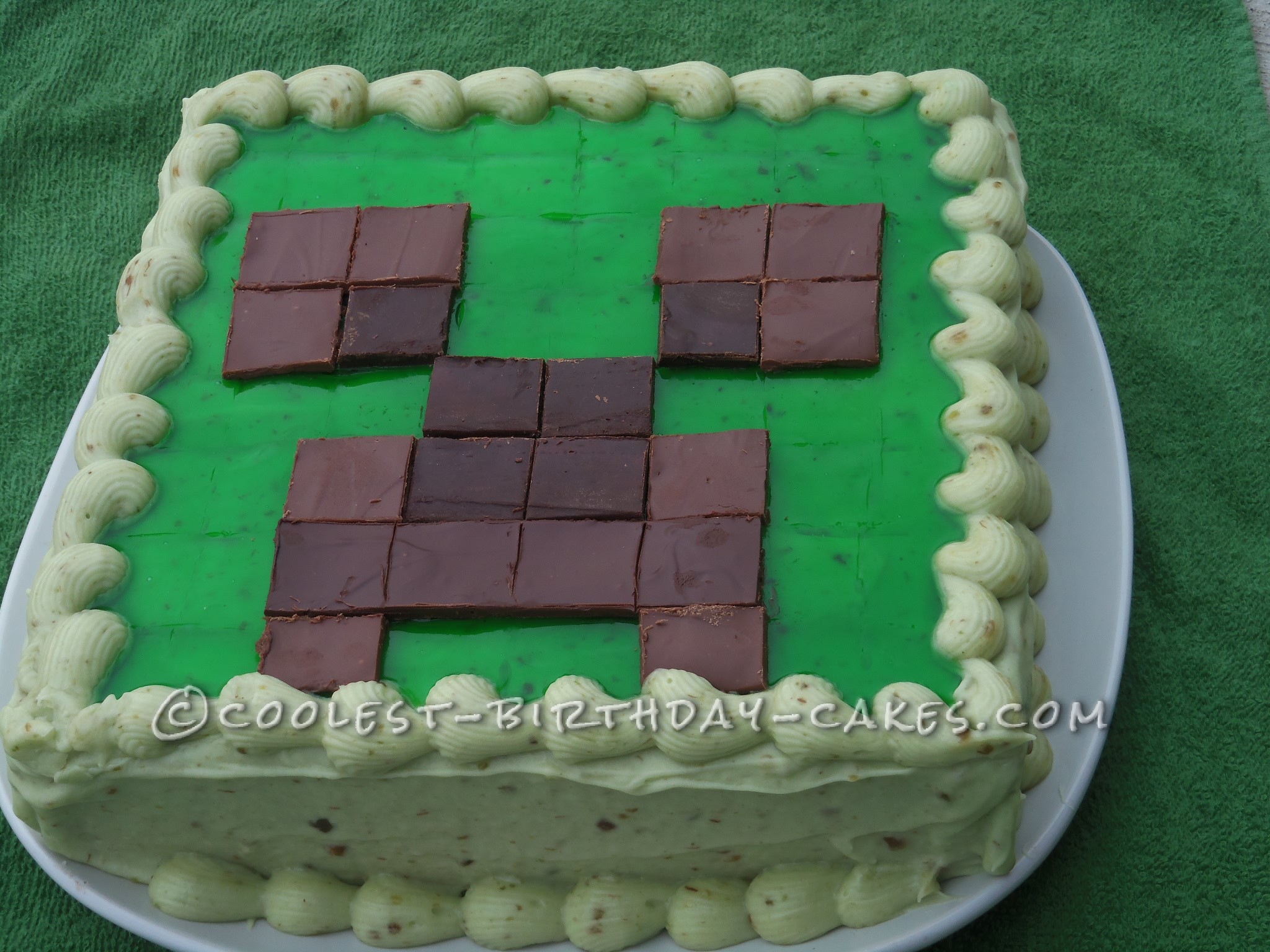 So St. Patrick’s Day is this weekend, and this is green, right?

(Can I just mention that I have a hard time liking a holiday whose only purpose I’ve seen is to have an excuse to pinch people?!  So I read more about it this year, and concluded that the symbol should be a THREE leaf clover.  Look it up.  But I digress.)

OK, no, that’s not really why I made the cake. My son’s birthday was coming up, he loves Minecraft, and begged for a Creeper cake. Fortunately he only wanted it’s face and didn’t really care if each pixel was a different color than the next. So he got this simplified version.  But he wanted it green. Inside too.  But it had to be white cake.

My older son, a senior in high school, saw the finished cake first. His reaction?  He pulled out his cell phone, snapped a picture, and announced that he HAD to send this to his buddy, who would love it. The birthday boy?  A huge grin. And then laughs when I tried to stick birthday candles in the top (if you want to do this, consider poking them in when the gelatin is still semi-liquid.  Otherwise, the gelatin works as a great trampoline for the candle ends.)  I did eventually get them in, but had to treat them like screws, twisting to gain entry.

Here’s what I used:

Grease and flour your pan really well, then bake the cake until done.  Meanwhile, bring one cup of water to a boil, add the gelatin, and stir to dissolve. Don’t add the other cup of water the box calls for. You’ll have about 1 1/3 cups of gelatin liquid.  Set it aside. When the cake is done, let it cool in the pan 10 minutes, then invert it onto a cooling rack.  While the cake is still warm, carefully spoon about 1/2 cup of the gelatin mixture on it, spreading it so it soaks in evenly.

Once the cake is completely cooled, make the frosting:  Beat 1 stick of softened butter until it’s smooth, then add about a pound of powered sugar and 1/4 cup of the gelatin mixture (warm it slightly if it’s too solid to pour). Beat until smooth. If it’s too thick, add a little more gelatin mixture; if too thin, add more powdered sugar.  (If you notice the dark specks in my frosting, they’re caused by experimenting with a half avocado in the frosting.  It never did end up as smooth as I wanted, but it gave an interesting earthy appearance.)

Frost the top and sides of the cake, then pipe a border around the top. Leave NO GAPS in the border. Pour the remaining gelatin onto the top; the border serves as a dam to keep it there.  The ideal pouring temperature is slightly warm to slightly cool- you don’t want it so warm it melts the frosting, nor so cool it forms lumps all over the top.

When the gelatin has just started thinking about setting up (slightly thicker than egg whites), pull out a ruler and a chef’s knife. Score the gelatin, pressing down into the frosting below,  in an 8×8 grid pattern, which is one square to one inch. Now make your chocolate facial features, you’ll need 20 1×1” squares; 10 darker and 10 lighter. Melt 3 Tbsp semisweet chocolate chips and spread in a 3” by 6” rectangle. Do the same with milk chocolate. Chill in fridge about 10 minutes, until just set but still flexible, so it won’t shatter when cutting.  Pull out the ruler again, and cut to form 1” squares.  Lift them up with the sharp side of the knife and set them in place on the cake. 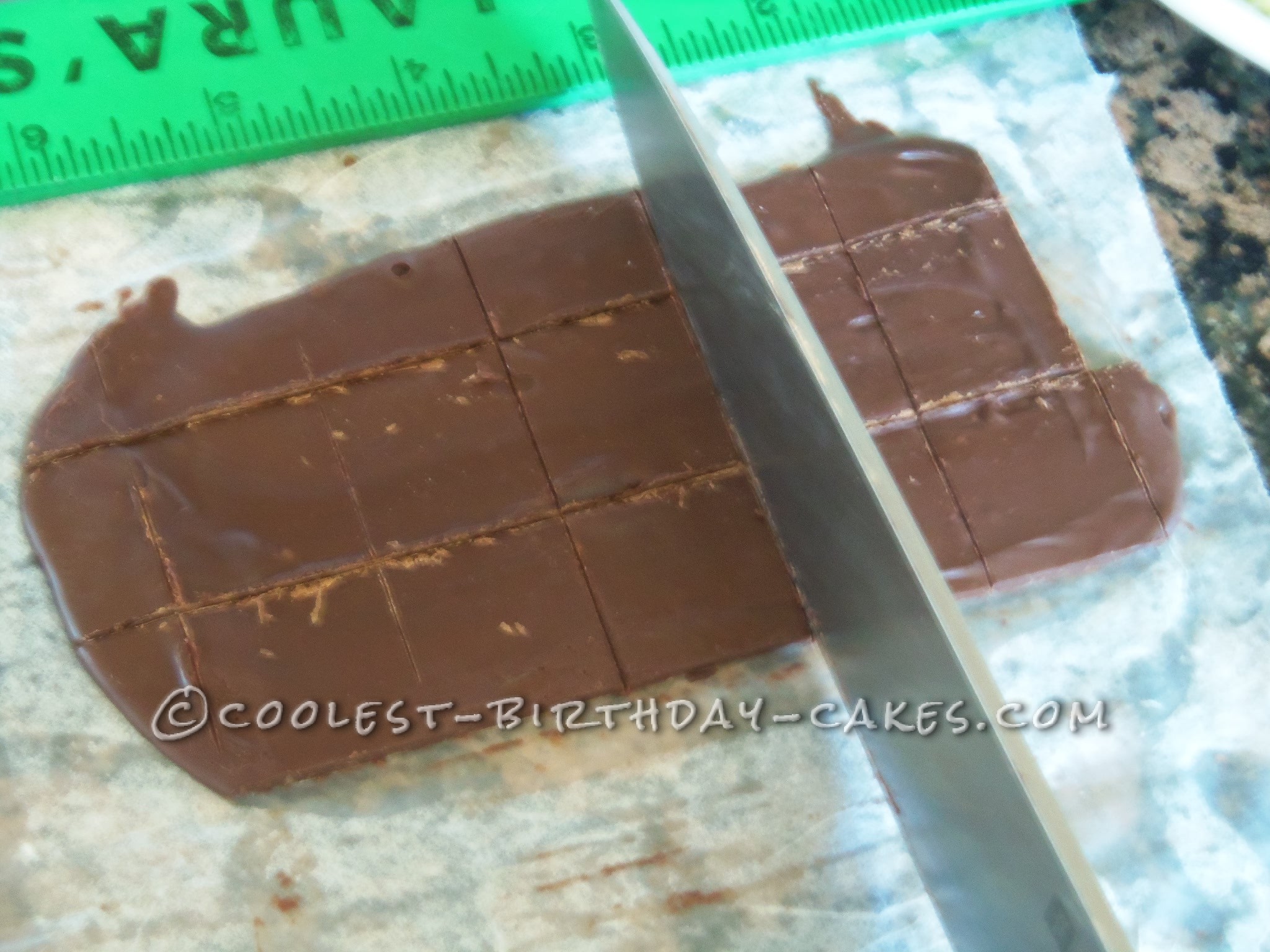 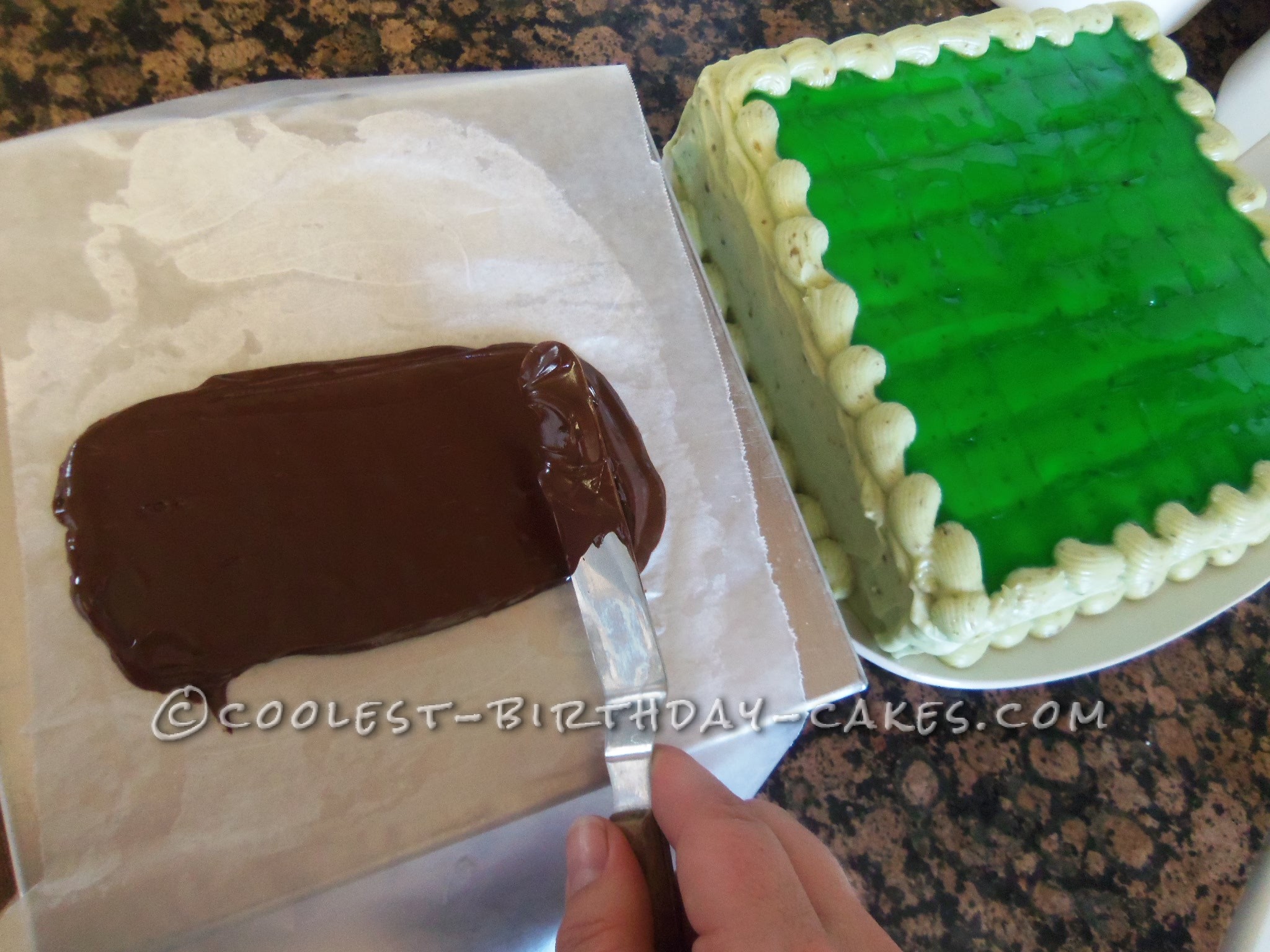