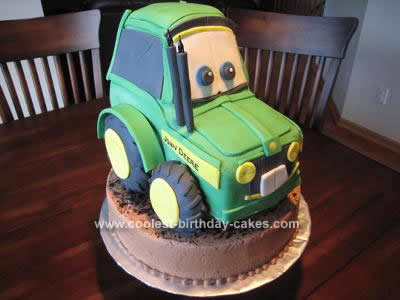 My idea for a Homemade 3D John Deere Tractor Cake started out with thinking that I would use a tractor loaf pan and then add a three dimension to the wheel on the back. However, the more I thought about it, the more I wanted it to stand up completely and really have a 3D look to it. I had never done a 3D cut-out cake or covered a 3D cake in fondant, so I saw many challenges in front of me. The web helped me see hundreds of examples of everyday people making some beautiful cake creations, which gave me the confidence to get started.

So I drew up what I wanted it to look like, decided that I would want it to stand on a cake base of 12″, and began baking. The body was a half sheet pan of dense chocolate cake (for support). I then cut up the base boards so I would have the correct proportions. One for the bottom of the tractor and one for the cab, with four plastic internal pillars for support. I had already made the wheels earlier in the week, with homemade Rice Krispy bars that I formed in two small glass prep bowls. After forming them, I covered them in fondant and stuck a dowel rod through them like a sucker, so they could be pushed down into the base cake (rather than attaching them to the tractor body).

After sculpting the cake with a knife, I rolled out the green fondant and covered it. Then I began giving the tractor personality and details over the span of 4 hours.

The tractor, the base and the wheels all arrived to the site separately. I assembled the tractor by placing it on top of five pillars that came out of the base to give the look like it was elevated. Then I placed the wheels in the base last. It was a great learning experience and a lot of fun. 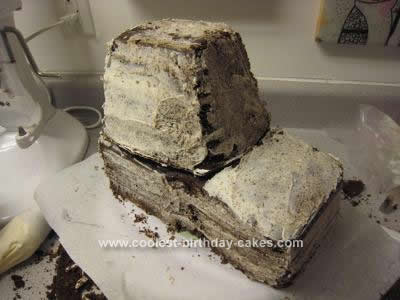 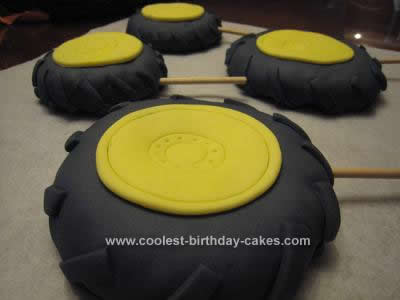 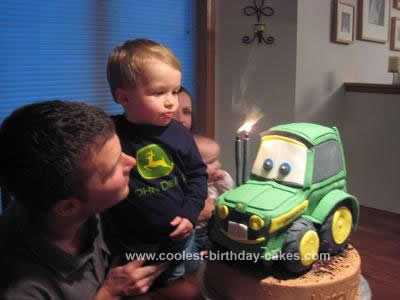