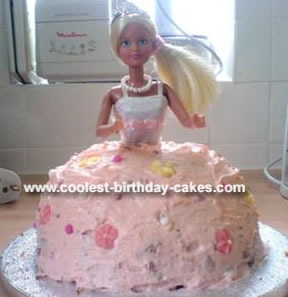 I made this Barbie cake for my cousin’s 6th birthday as she loves everything princess and pink! I cooked the cake in a Pyrex bowl, as we didn’t have a Wilton doll pan like most others on this site used. It took a lot longer to cook than my other cakes as the bowl was so big, and I was worried it would burn before the whole thing was cooked through! It came out a bit brown, but it still tasted yummy!

I cut a hole out of the top with a cookie cutter, and after removing the legs from one of my old Barbie dolls and wrapping her dress in cling film, I pushed her into the hole.

To decorate, I made pink icing to match the ribbon on her dress. I iced the whole cake, and then stuck edible flowers and silver and pink icing balls all over. The icing balls gave it an extra shine.

I didn’t know where to put the candle without ruining the dress, so I made a cupcake and used leftover pink icing to cover the top. I stuck the candle in the cupcake and placed it in front of Barbie. However, my cousin ate the cupcake before I could get a photo!

Overall it went really well and everyone loved it. However if I did it again I wouldn’t decorate until just before I presented it, as the white icing flowers had turned pink after sucking up all the food colouring in the icing!