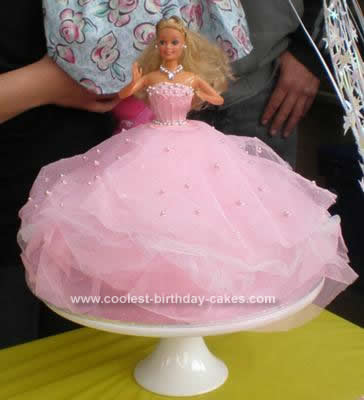 As soon as I had a daughter I knew her 1st birthday cake would be a Barbie Dolly Varden cake. But I didn’t want just a plain piped icing skirt for our Barbie cake, I wanted to create something special, different and meaningful. I wanted Barbie to have a real gown, made from tulle left over from my daughter’s christening candle.

I scoured this website to see if any one else had attempted something similar to this Barbie Doll Birthday Cake Idea, but hadn’t. I read everyone’s tips on how to work with Barbie so this was very helpful.

So off to work I set trying to figure out how on earth I was going to do this. I gathered my supplies and some extra hands and support from my mum and off we went. Firstly I sat the Dolly Varden tin on a 14 inch round board and laid the gigantic pieces of tulle on top. We then decided to cut out tulle circles using a 16inch round board as a template so that when the tulle sat on top of the cake it would flow down and form a full skirt and not be too short. We cut 6-8 tulle circles using a combination of pink stiff tulle and white soft tulle. We then placed our tulle circles on top of the Dolly Varden tin they were sticking up and not flowing down as a ball gown should, then mum came up with the most brilliant idea, she made a sugar syrup dissolving caster sugar (1/2 cup) in a bowl of fairly warm (not boiling) water and we placed the tulle in the bowl for a minute or two, took it out squeezed out the excess water then arranged each layer on top of the tin, scrunching the tulle as we went.

We started with pink tulle as it was a little stiffer then layered 3-4 layers of soft white tulle scrunched heavily to create the balloon ball gown effect, then ended with 2 layers of pink (stiffer) tulle. We kept scrunching with our hands till the dress looked full and we liked the way it appeared, then we lifted the board with tin and tulle on top in it’s entirety and placed it in the fridge. The sugar syrup dries clear and sets the skirt in place. I left it in the fridge for 2 days before making the cake. I just lifted the tulle skirt off the tin and put it back on the board, still in shape and took the tin so I could make the cake 2 days before the party.

I used a basic prepackaged vanilla sponge mix and followed the directions. The cake ballooned on top of and around the sides of the tin (I think I put too much in the tin), but once cooled I just trimmed off the excess using the tin as a guide and leveled the bottom flat. I prepared the Barbie doll a few days before by washing her thoroughly with soap and water. I washed her hair and did her hair up nice as well. I kept her body intact so that I could ice her torso by holding on to her legs, I only iced up to her waist line leaving her hip piece where the legs attach without icing as this is the part that sticks into the cake. It also helps to remove the legs first and then reattach them just enough so that you can work with the doll and pull them off easily and lift her arms up as high and as outward as they will go. I also found that a tall glass that fits her legs helps to stand her in without disturbing the icing when you are preparing the cake before putting her in.

I made one quantity of buttercream icing, 250g unsalted butter softened, 1Kg icing sugar sifted, 1 Tbsp Vanilla Extract and food colouring, just whip butter in a mixer till creamy then add icing sugar little by little until thick and creamy, add vanilla essence and food colouring till desired colour is reached. I used raspberry red until I got a pink that was matching the tulle. Then I iced the Dolly Varden cake and placed it in the fridge to set first so it would be hard when the tulle was placed on top. I then set to work on Barbies torso, using a small pallette knife I placed icing on her body in vertical strokes first all the way around, I found her boobs difficult to negotiate around so I piled up the icing working horizontally and tried to make them as flat as I could which made it look more like a dress.

I then stuck silver cachous around the bodice using tweezers to place them carefully. She looked good once finished, but I decided she needed jewelery to complete her outfit so I piped small dots of icing around her neckline and stuck silver cachous to form a necklace and gave her earrings and a ring too (but this fell off just prior to pulling it out of the fridge!). I rested Barbie in a tall glass to set and started working on putting the whole thing together. I took the set cake out of the fridge and my separate tulle skirt. I cut a small hole (about 5mm diameter)in the top of the cake so as to make it easier to push Barbie’s torso in. I then cut about the same size hole in the top of the tulle skirt so that barbies body would squash it into the hole nicely. I piped a bit of icing in the hole to act as glue, then placed the tulle skirt on top aligning both holes.

Then I picked up Barbie using her arms, gently pulled her legs off and placed her in the hole holding onto both arms for even pressure and pushing her hip section in up to her iced waist. When secure I used some dressmaking pins to secure to top of the tulle to the cake for support I used 1 on either side and one at the back (just remember how many you use, so that you can ensure the are all accounted for before eating the cake. Then I piped some more icing around the bottom of Barbie’s waist where it met the skirt to hide any flaws or gaps and to secure her.

Lastly, I piped dots on her skirt and placed silver cachous scattered around the skirt. She looked absolutely gorgeous when finished, she was too pretty to cut!! The best thing was when my daughter saw her, she was so excited and it was worth all the fiddling. This Barbie Doll Birthday Cake Idea was a big success.