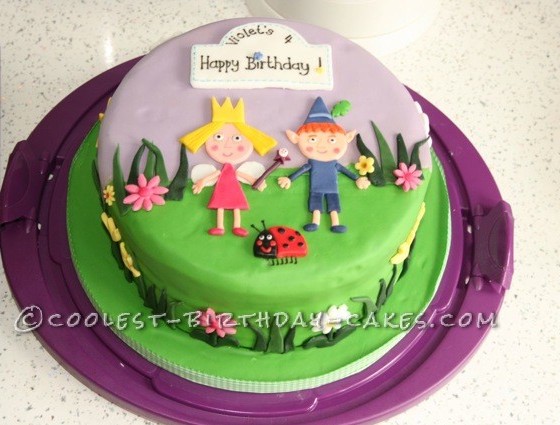 For my daughter’s 4th birthday she was very clear that she wanted ‘a Ben and Holly cake’. Ben and Holly’s Little Kingdom is a cartoon from the makers of Peppa Pig, Ben is an elf and Holly is a fairy princess. It is very popular in our house!

My daughter’s party was at a play center and I decided to make cupcakes for her friends to take home instead of slices of cake (never popular in party bags as they end up squished and stuck to napkins), also that way we could enjoy the cake with family members later. I’d seen some amazing Ben and Holly cupcakes on the internet and was inspired!

I looked all around for cakes but couldn’t find anything close to what I/she wanted. However, I managed to find images of B&H balloons on the internet, which I used as the starting point. I sketched out what I wanted – a round cake, with Ben and Holly on, with the decorations continuing around the sides of the cake. We have a set of fridge magnets with nearly all the characters on, so I used those as guides as well.

I then spent many a night after small children were in bed, making small fairy and elf faces and decorations out of sugar paste. I didn’t add anything to the sugar paste, just let them dry for a number of days. I did use a lot of pre-coloured sugar paste and just mixed them together to get colors I didn’t have. I did the flesh shapes of the faces first, then once they were dry I stuck them on the round lilac discs (using water with a small bit of sugar paste melted in it as the glue and a fine paintbrush) and then added in all the other details.

Everything was either cut freehand or improvised with things I found round the house (bottle lids for cutters etc). For the noses, mouths, cheeks and colors around eyes I used food co louring pens, which kept drying up and threatening to mark the sugar paste. I didn’t add the toppers to the cupcakes until the night before the party –  I fully expected to wake up and find that they had completely melted into the icing, but they seemed fine. However, it was one of the hottest days of the year and we were shut in a giant industrial unit, so by the end of the party they were a bit shiny. If I was ever mad enough to do it again, I would add something to the sugar paste I think is called CMC just to firm them up properly.

The cake itself was made of 2 Madeira cakes (I needed the height) sandwiched together with jam and butter cream, then crumb-coated with butter cream. I applied the sky-color and the grass-color fondant in 2 halves, my joins weren’t brilliant but I hid some of them with decorations! Then all the way round the sides of the cake I stuck freehand triangles for blades of grass, used cutters for the flowers, and free handed the clouds and sun.

To give it that final Ben and Holly feel, I added the name plate, which was just sugar paste written on in food coloring pen (I really didn’t think the black was going to last for the whole of the wording). I used the internet and DVD cases to check that my font was properly Ben-and-Holly-like, and added a tiny star and flower.

I notice all the bits that aren’t perfect, like the joins of sugar paste, and the fact that the cake isn’t covered completely smoothly, and that some pieces are a bit chunky (the name plate could have been thinner, cake-Gaston is a bit chunky). I nearly went permanently cross-eyed from molding minuscule bits of sugar paste (ladybird dots?!). However, it was all very well received – my daughter smiled happily and said “It’s exactly what I wanted”, the staff at the play center were amazed that I’d made it all myself, and all the party guests knew who the cupcake characters were so at least they were recognizable! It was a real labor of love, not 100% sure I’d do something so detailed again in the future! 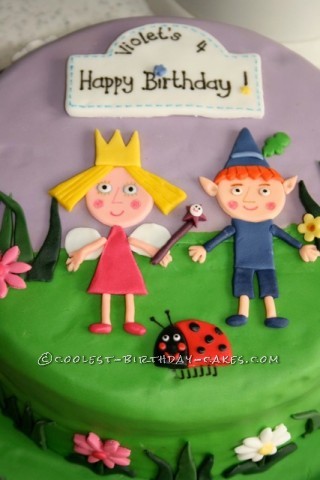 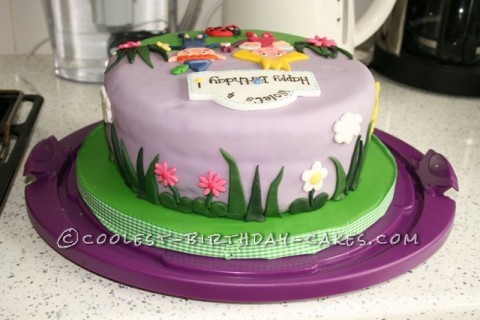 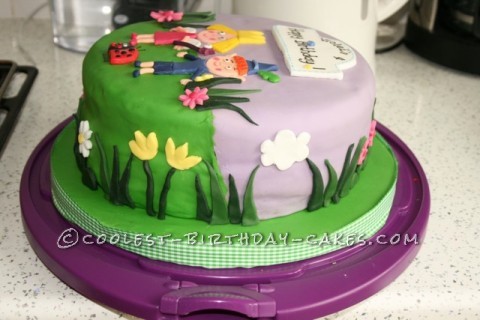 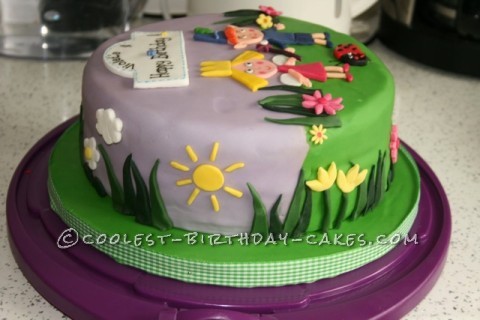 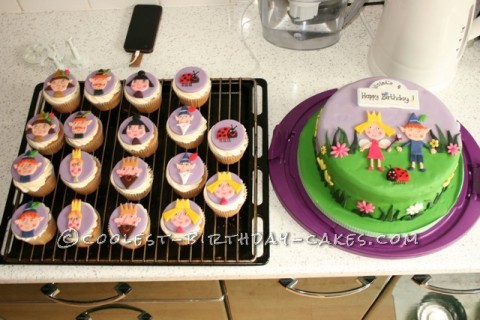 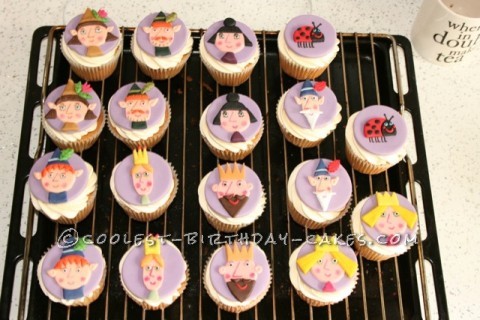 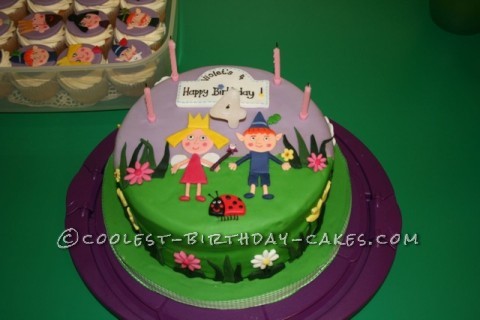