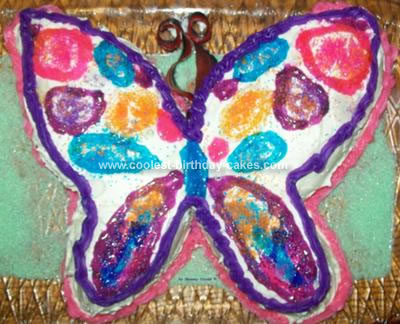 This Butterfly Birthday Cake was easy and my little girl loved it for her 1st Birthday, but a butterfly could be for any occasion. This is an awesome starter cake. I had a problem, it was my little girl’s first birthday and she has an egg allergy. (I had contacted the bakeries and even the icing had eggs). How was she going to have a cake? Of course she needed a cake so I searched the internet for egg free recipes and found I could substitute each egg with 2 tablespoons of (milk, soy milk, or formula). Yay – I could make her a cake.

However, when I was in the store I found MOST products have egg or nuts in the mixture. I did find a plain cake mix and a plain can frosting eventually. When I looked for decorative frostings it was easier because the tube colors and gels only had soy in it. Every brand will vary so if anyone has an egg or peanut allergy please be careful.

I had done her room in butterflies and when I saw this web site had butterfly cakes I knew I had to do one. I spent about an hour looking at different ones trying to build my confidence. After I got started I realized how easy it was and took a few pictures along the way because I was a little unclear of which direction to do next. Another item I’d like to point out is to make sure you have a sturdy base. I had learned from my previous 3 kids to make sure the cake could fit the high chair tray. I went with a cheap disposable serving tray that fit perfect, BUT it was flimsy and almost caused the cake to split when being carried.

First I prepared the batter and divided it into (2) 8″ round pans. I then baked the batter using my substitution according to the package. Then, I put both cakes into the freezer for 1 hour. At this site I learned it was supposed to help with the cutting and frosting. I flipped them onto a plate. Next, I cut them in half. ((This was a mistake because my halves were slightly off when I stacked them – I should have stacked them and then cut the circle in half.))

I frosted one half arranged it onto the serving tray and then stacked the top layer. At this point the rounded edges are together and the cut edges are outside. I put a triangle cut into each wing to make it appear the bottom was smaller. I could not believe I was so intimidated. Three cuts and you have a butterfly. ANYONE can do this!

Next I added the base frosting. I would have tinted it but I forgot to buy food coloring. It took 2 cans to coat the cake and one layer was holding the layers together. Once I had a frosted butterfly all that was left was to add detail.

I made it up as I went but my main plan was to stay symmetric. If I did it to one side I did it to the other. I had colored sugars, Disney Princess gels that had glitter in them. ((I wish the photos showed it better)) And I had a tube of purple and a tube of pink icing. I bought screw on star decorative tip for 1.00 beside them on the shelf at the store. I began with the center body of blue gel. Then I made shapes and filled them with the same color sugar. I tried just sugar but it ran everywhere so the gel made nooks to hold the sugar. I added a few dots of gel too. Then I was going to mix some sugar colors and decided I didn’t like it that much. I then put the dark purple trim with the tube and pink trim at the bottom. I was scared the more I added was the more I could mess up. I was glad I did the trim because it made it look less beginner and a little more designer. My favorite part was the way the trim tied it all together. I sprinkled green sugar around the butterfly to give the plate some umph.

The antanaes were fun. They are fruit by the foot cut about 8″ long and curled at the top. Secured to the cake with icing and anchored the curls with frosting too so the wouldn’t flip over. I had considered other things but since the cake was so tall I wanted it to be proportionate.

After all this work this cake was only for my little Treasure. If I would have bought more supplies I would have made more. Everyone else had pies and Treasure loved her special butterfly cake. 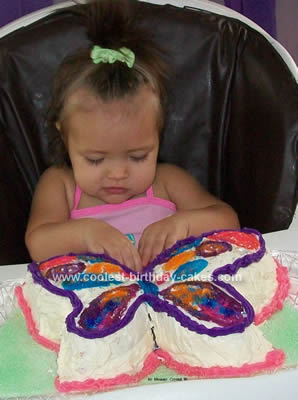 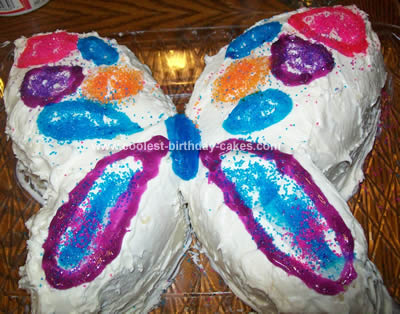 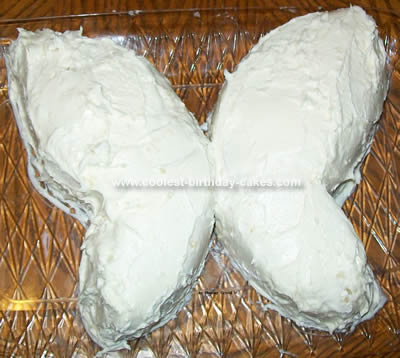