My twin girls wanted a butterfly themed cake. I found a couple years ago, cake decorating is a lot of fun so I have been making their cakes. My imagination was all over the place however it stopped with a two layer cake covered in green & white marble fondant. I rolled a small amount of green fondant into the white to create the marble effect.

I really like the look of fondant however it can difficult to work with and the possibility of it cracking always concerns me. This however was the easy part lol I then decided I wanted a tree. I made an extra small cake and used circle cutters to cut multiple pieces all the same size. I then layered them and covered it in fondant  that I had already used a tree mold for to create the design on.

As you will hear, molds and cutters were my friends during this process. The branches and leaves proved to be difficult and to be honest, was not my favorite part of the tree. I used fondant to cover wire for the branches then a leaf cutter for the leaves. I do not recommend doing it this way and will not in the future lol. The fondant would not stick to the wire, the wire would break, the fondant would break…ohhhh I got very discouraged during this part. I had already put the tree base on so I was stuck and had to carry on with the idea.

For the butterflies I also used a cutter for and let sit on a flower tray to form. Once dry a little I stuck them into the wire just enough to hold in place. The wires were then pushed lightly into the tree base. This also was not my brightest idea. The butterflies were too heavy and would lean so I ended up gluing them together with edible glue. Just enough to hold in place. Now..this was not enough for me so my next idea was to create the girls.

One loves pink, the other purple so using a human child mold I created two little girls. I was not fond of the human molds as they looked really funny and not human at all. With a little sculpting I was able to fix them but not save their legs. Dressing them was one of the easiest parts for me, I cut the shapes out of fondant and wrapped around the bodies. I used cake writers to add details to their faces. Using various branch and flower cutters I cut fondant to decorate the front of the cake. I colored icing green and lightly decorated around the edges of the cake as well as the tree base to cover any seams.

The tree was a bigger hit then I expected. No one could believe I actually made this cake in only a few hours (other than time to let stuff set up). They were amazed that some one without any training could throw this together. While I, as the maker found it to be just ok. Everyone else expressed pure delight including the birthday girls! Their favorite part was them of course lol!!

Since posting this photo on my personal social media, a lot of friends are now requesting me to make their cakes. :) I guess that means I did a great job! This cake pushed me a little bit out side my comfort zone and for that I am thankful. I need to not be afraid to try different methods and just go for it!! Same applies to whom ever reads this…you never know what you are capable of until you try! 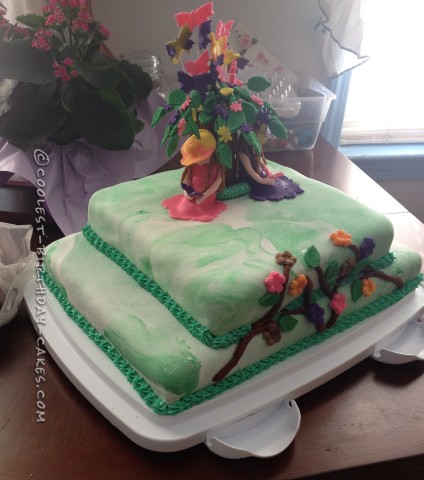 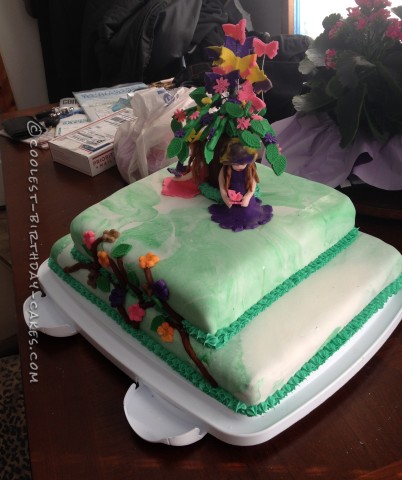 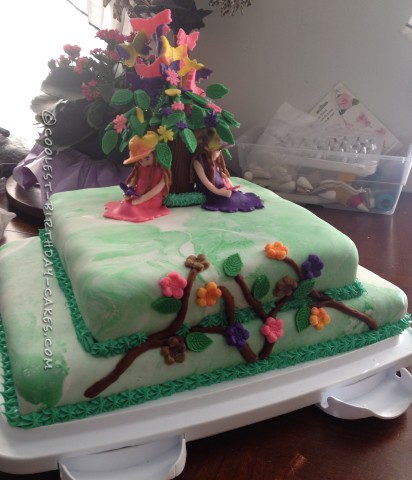 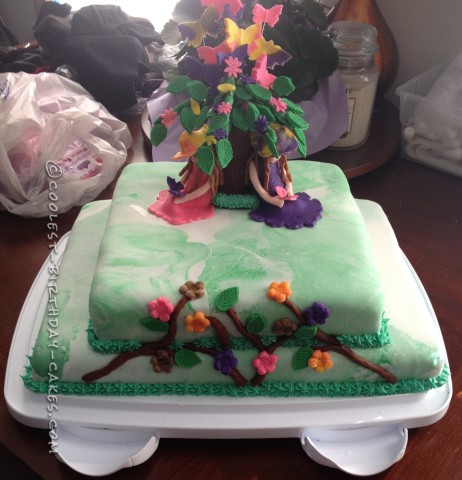 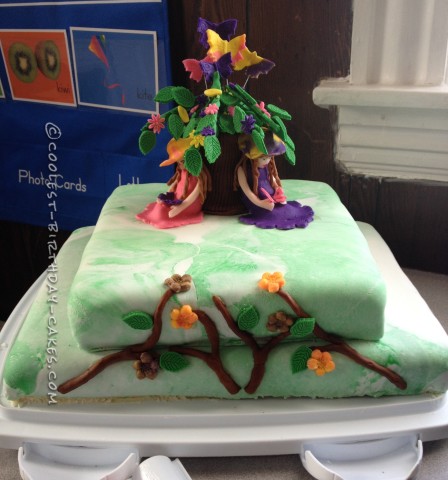