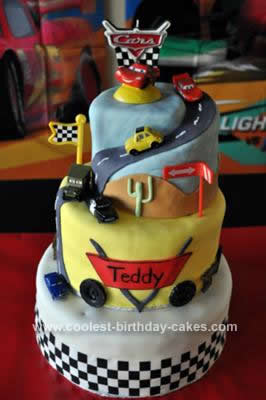 I made this Cars Birthday Cake for my son’s third birthday. I am a stay at home mom who enjoys baking as a hobby. This cake is three tiers with three layers in each tier. A cake like this may seem impossible, but the key is preparation. About two weeks before his party, I took a couple days and baked the cakes from boxed cake mixes. I leveled the tops with a cake leveler tool, but you could also just use a knife. Then I frosted the tops of the cake and stacked the layers and popped them into the freezer to “flash-freeze”. This means you allow the tier to freeze for an hour or two, until it hardens but doesn’t freeze all the way through. Then take it out of the freezer and finish frosting the sides and top. Pop it back into the freezer long enough to harden that frosting and then wrap in plastic wrap and foil and your cake taste fresh when you’re ready to use it. To defrost, unwrap completely, and defrost in the fridge overnight.

Also, about two weeks before the party, I made three batches of marshmallow fondant. I used a recipe that I found off the internet from a blog called Bake at 350. Fondant isn’t as difficult as some may think. I did a lot of reading on the internet for tips and also watched a few you tube videos.

About three days before the party, I defrosted the cakes. The bottom tier was the easiest because I didn’t have to add coloring to the fondant. I rolled out a big circle with about a 16 inch diameter and then got the cake covered on my first try. I got it rolled out to about 1/8 inch thick, got both my arms underneath it, picked it up and draped it over the cake. Then I smoothed it out along the top using my hands and then smoothed down the sides. Then all that was left was to take a sharp knife and trim off the excess fondant. That might have been luck because my second layer took a few tries because my fondant kept tearing. The checkered pattern you see around the bottom tier is rice paper. I ordered it off of eBay. I just put a dab of water on the fondant and the paper adhered perfectly. Be careful not to try to rub over it or smooth it while it is wet because it will tear. As you can see, the checkered pattern did not go all the way to the top, but that’s because I had three layers instead of two.

For the second tier I tried to use red fondant, but for some reason, red coloring is very difficult to work with as it changes the consistency of fondant. After several failed attempts at the red, I gave up and used yellow coloring instead (this is where you’ll be glad you made several batches of fondant). I use the food coloring gels, not liquid food coloring. The gels give a more vibrant color and they don’t require as much.

For the top tier, I took white fondant, rolled it into about a 6 inch log, and then took a toothpick and streaked blue food gel down the log. To incorporate the coloring, I folded the log together and then rolled between both hands, folded it over onto itself, rolled, and continued to do this several times. Before the blue was fully incorporated, I rolled it out into a circle. This is how that marbled effect was achieved.

To make the top tier look like a road, I used a sharp knife and cut out a sloping “road”. I did this after I did the “flash-freezing” because it made cutting easier as the cake isn’t crumbly. Then I frosted the tops and sides. The red “Teddy” emblem was made using red fondant. I made a template using a cereal box, laid it on top of rolled out fondant, and then cut around it with a sharp knife. I used a black food writing marker that you can buy at Hobby Lobby or Wal-Mart.

The road is also fondant colored with black food gel. That same fondant is used to make the “V” shape behind the red “Teddy” emblem. The mountains are brown colored fondant. I used a pizza cutter to shape them before sticking them on. To get fondant shapes to stick to fondant, just use your finger tip to rub a little bit of water on it and they will adhere to each other. The cactus is made from green fondant that I rolled into small pieces between my hands rather than rolling them flat. It gave it more of a 3D look. The white lines on the road were left over frosting that I had used. I just put a little in a plastic baggy and cut of the tip so that I could pipe on the lines. At that point my hands were shaky so the lines are not as straight as they could have been. The little cars actually came out of a CARS activity book that my son has had for months. They worked perfectly as they were the perfect size. Had I not had those, I’m sure any of his regular die-cast cars would have worked, but I wouldn’t have been able to get as many on there. The black wheels and gold trophies around the middle tier came out of a CARS tic-tac-toe game that I found at the dollar store. And the arrow sign and flag came out of the toy box. None of that stuff was edible, but it sure added to the theme of the cake. Plus, I’m not sure I would have been able to sculpt those cars out of fondant or gum paste.

To stack the tiers I used several drinking straws. Once the tiers were covered in fondant, I pressed drinking straws through the cake and cut them level with the cake. You will notice that the tiers are not exactly centered. I offset them so that I could have room to set the cars on the sides of the tiers. I started by putting one in the center and then just placed about 4-6 more where I thought they needed to go. I should have mentioned earlier that the tiers are setting on round pieces of cardboard that I cut from a box and covered in foil. I used my round cake pans as the template by simply tracing around them onto a thick piece of cardboard. You can also buy these cake rounds from Wal-Mart or Hobby Lobby.

This cake will come together for you easier than you think if you do as much as possible before hand. I had my fondant made early, the cakes all ready and frosted in the freezer, and even made a big batch of buttercream frosting a couple days before baking the cakes. I had the cake rounds ready, the cake board ready and wrapped in red wrapping paper.

A tip regarding working with fondant, if you have long nails, cut them off. You have to smooth fondant onto the cakes and nails just get in the way of that, and they really get in the way with the smaller detailing. Plus, if you knick the fondant, it’s impossible to cover up or smooth out.

Good luck with your cake, and HAVE FUN!