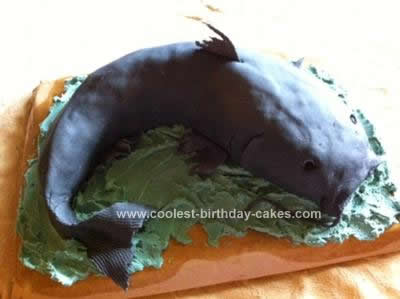 My Dad is an avid fisherman since his retirement. I had this idea to make him a cake shaped like a catfish for his 76th birthday. Having been born and raised in rural Tennessee, I’ve seen hundreds of fish, but until you start to mold one, you really miss out on a lot of details! I looked up catfish images online and studied the minor details and then went for it!

I started out by baking 2 9×13 yellow cakes and freezing them. I made marshmallow fondant and colored it a dark gray with black food color paste. I fashioned fins for both the top of the fish and sides by rolling the fondant thin, cutting the shape, and using a new comb to press the ridges in them, both front and back. I cut the tail out of fondant, made the ridges, and then layed it up over a spoon to dry to get the curve in it. All of this dried for a day or so. I had iced between the two 9×13 cakes with buttercream before freezing. I started carving the curved form of the fish in the frozen two layered cake. When the shape was right, I iced it with buttercream. I then rolled out the gray fondant to about 1/4 inch thick and wrapped it around the fish.

The mouth was the kicker! I folded the edge of the fondant under for the fish lips effect. Funny. I then made whiskers and used a hot knife to blend them in to his lip. I then cut a slit in his back and inserted the top fin. It worked nicely! I then colored some blue buttercream and smeared it around to look like water and then added the bottom fins of the fish. Daddy loved him!!!The Catfish Cake was definitely a hit! 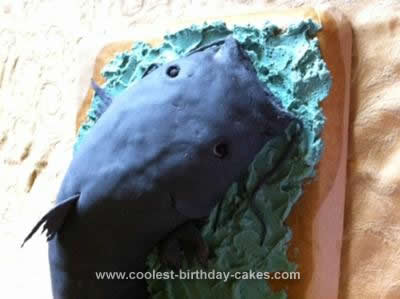